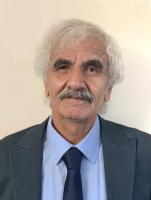 The result of what the researchers are doing, belongs to all people without considering religion and nationality even when their selves live under their government sanctions or other countries...

Here is what all are looking for. The only problem is the brain frequencies differences. While falling the objects was so normal for all, Newton thought about it.

The world is dealing with energy production problems and populations growth raises the need of energy. In this paper I am going to describe and demonstrate a new technology to show and introduce the result of more than 45 years’ research that I achieved on 2015 and has been examined more and more during these last 4 years.

So, I will show several examined circuits of my tests together with their videos for investigation to inform researchers from the most important cases and ability of my technology.

The circuits are so simple and needs only deeply consideration.

***Mentioning constant energy flow together with direction of movement in circuits is for simplifying the subject. The flow direction can be intermittent. 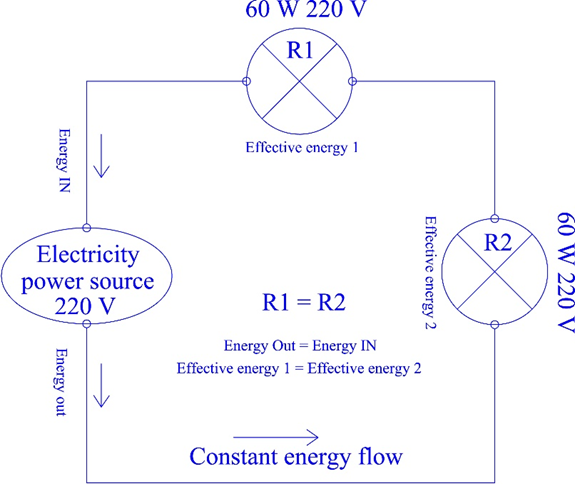 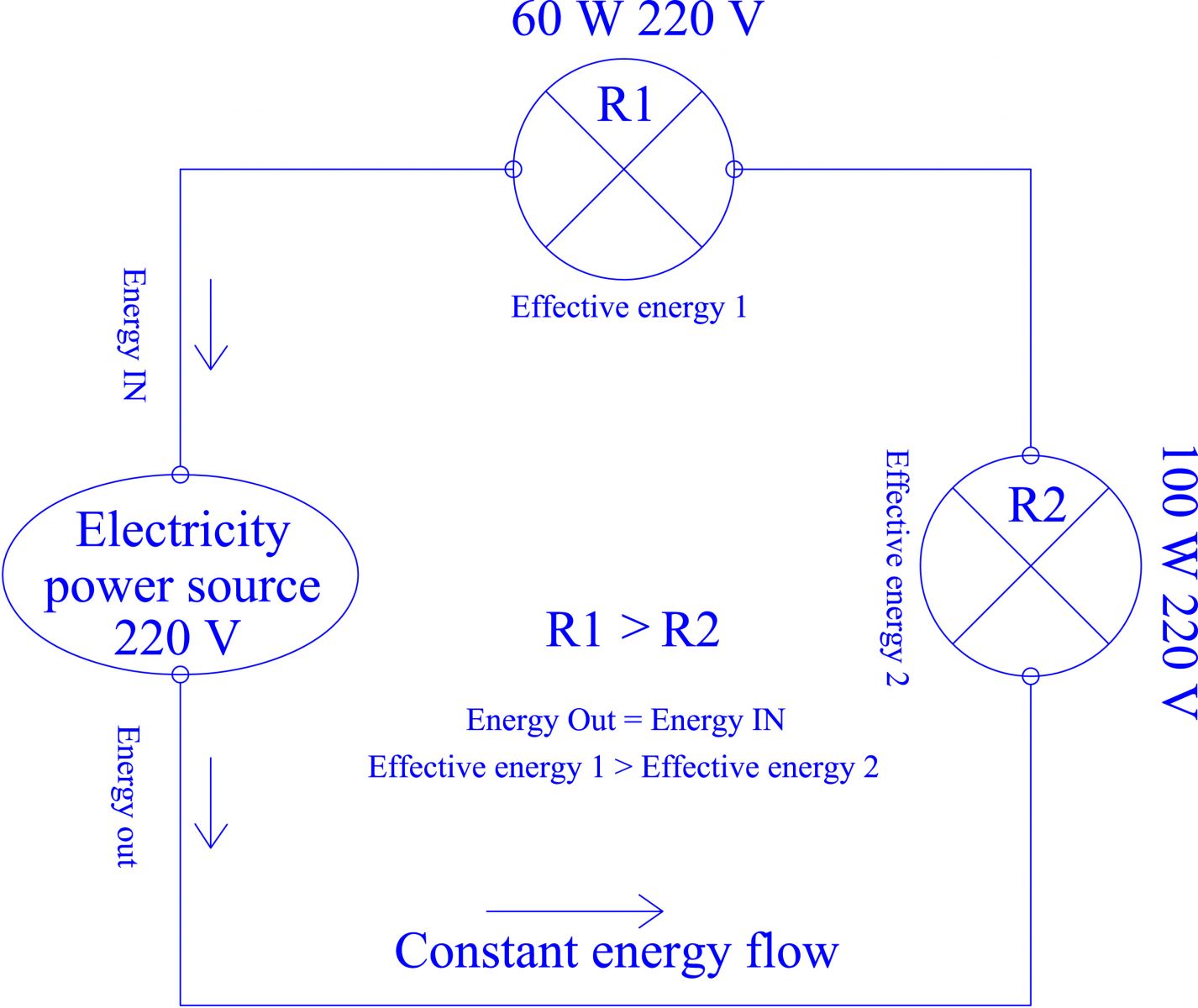 The video of practical exam of above circuit:

The R1 decreases the flow of energy and limits the necessary energy for R2.

In this condition the less resistance component (100 W bulb) acts nearly as a conductor in circuit.

The following video shows the series connectivity of the R1 and R2: 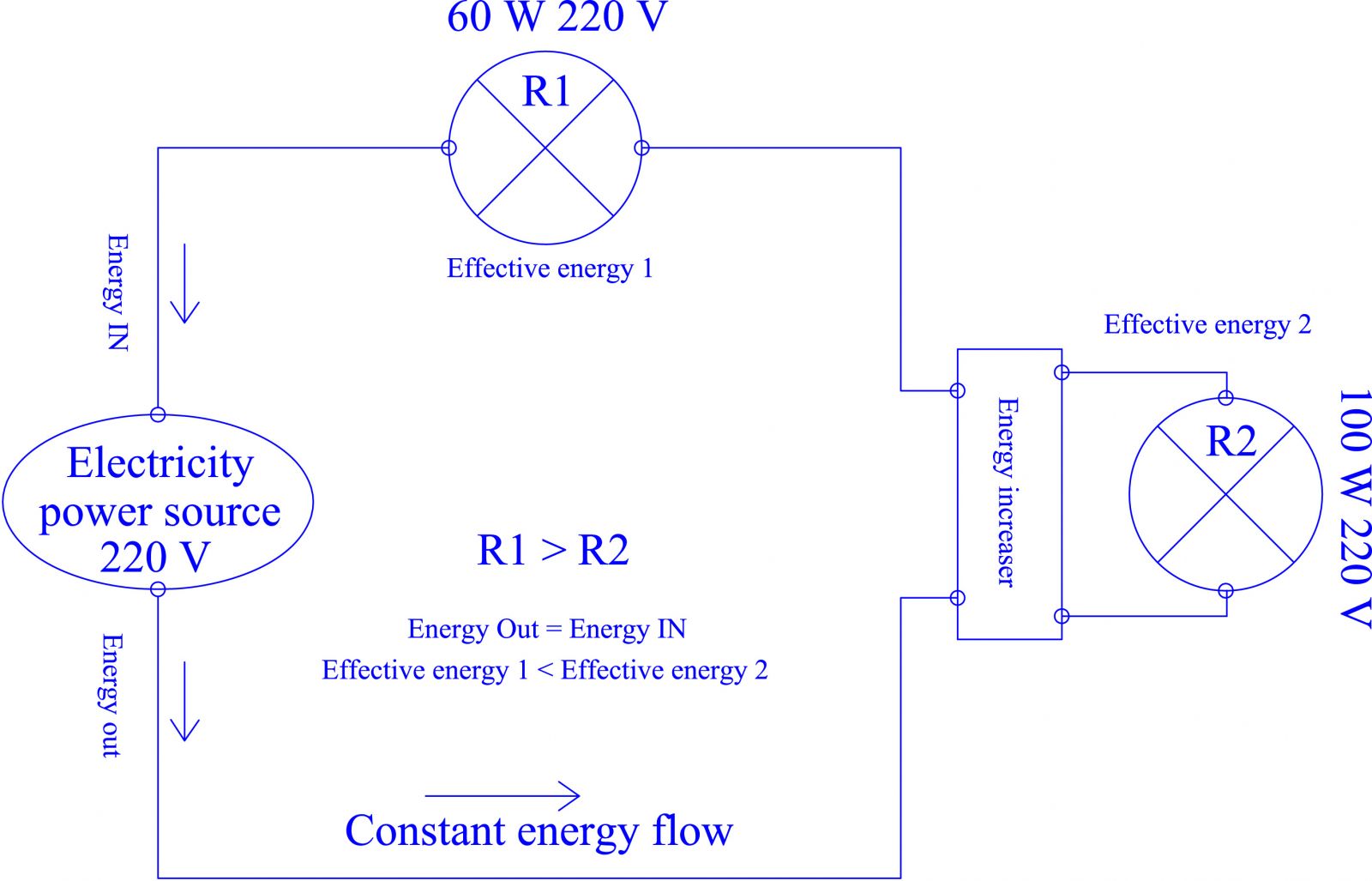 To prevent probably thoughts such as periodic current or frequency of flow affects that may cause view mistakes especially in bulbs light, the below circuit equipped by rectifiers and capacitors and confirms the continues flow of energy for bulbs. 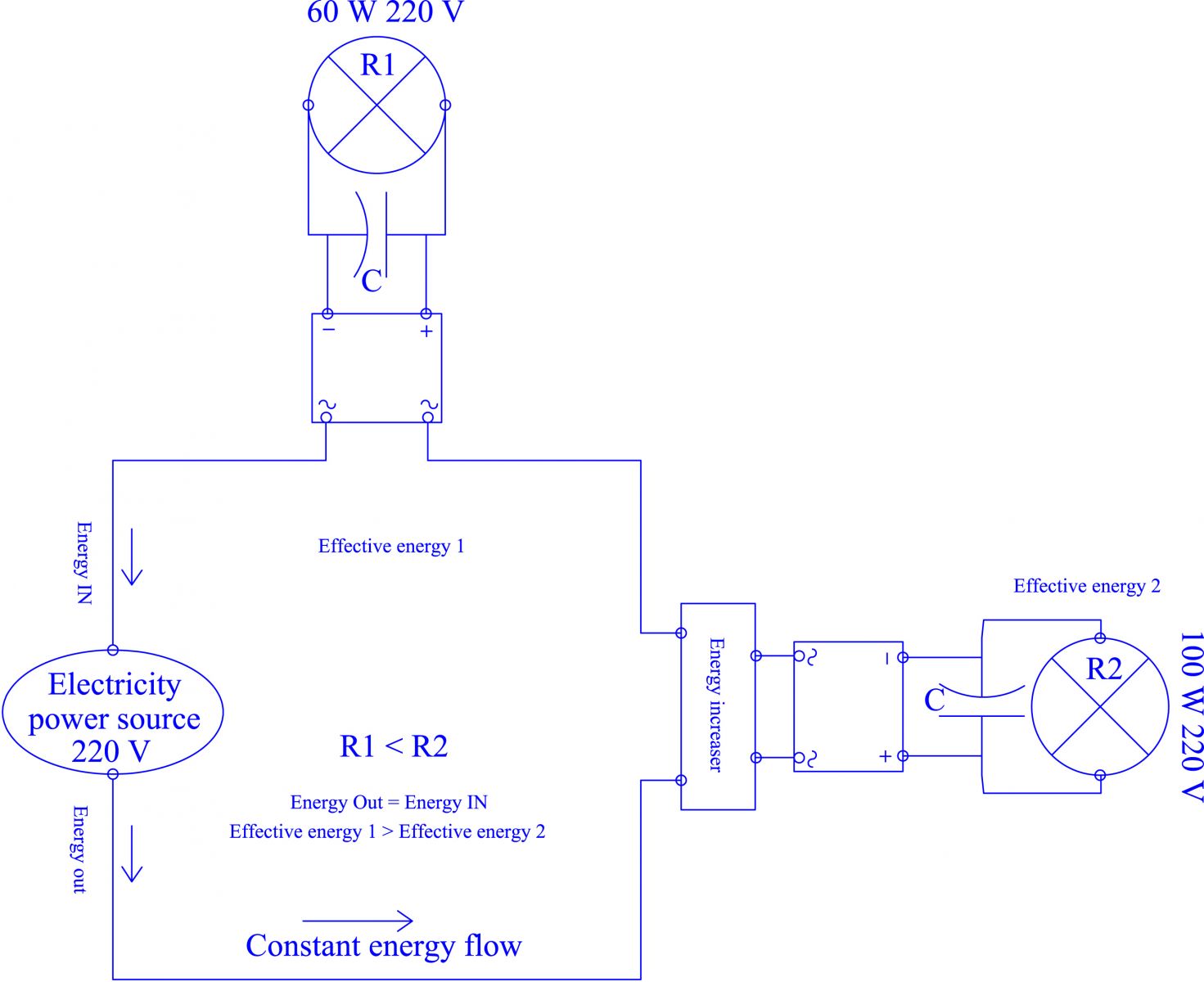 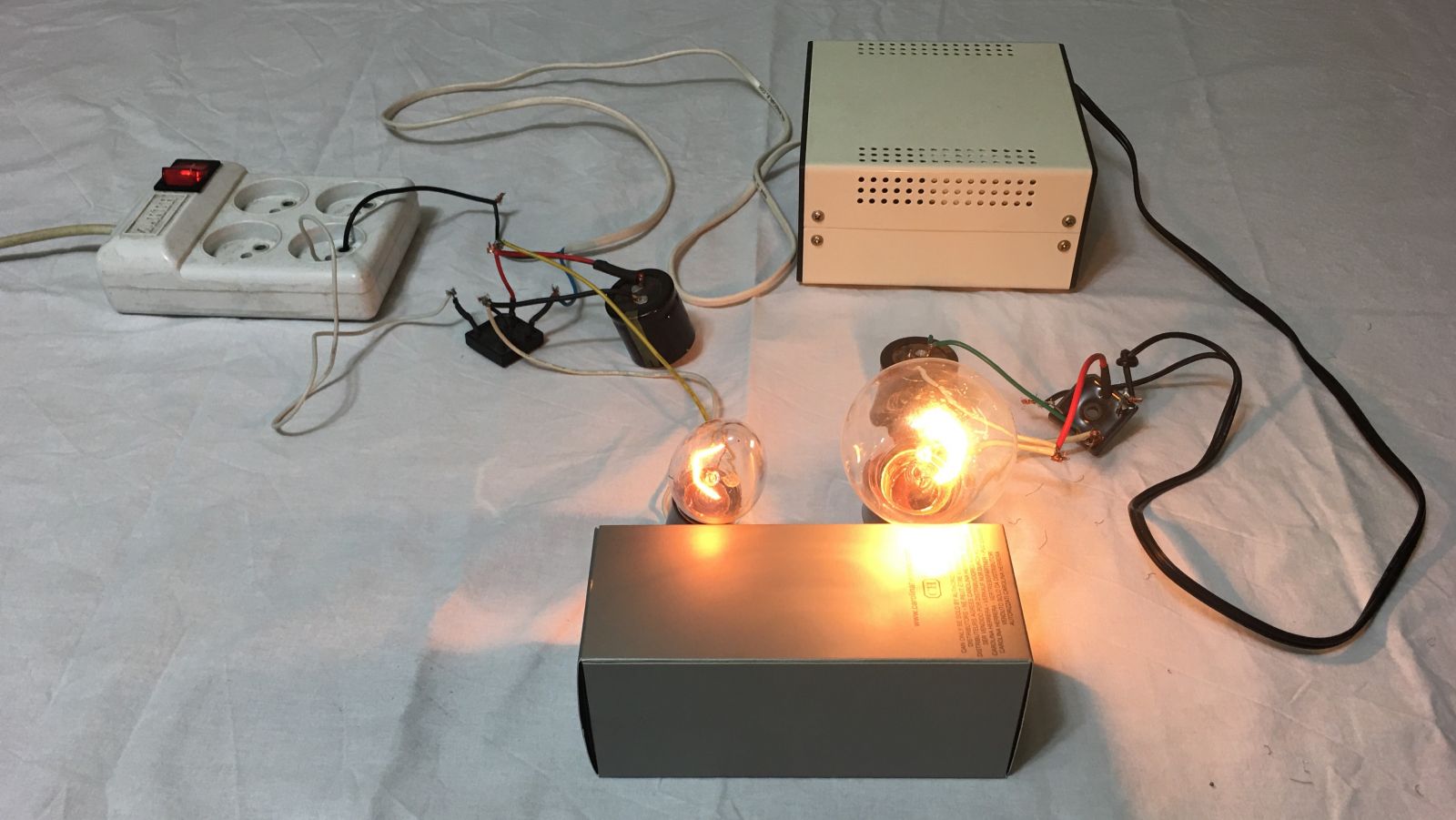 The video of practical exam of circuit 4:

Although the increase in energy has been seen in the above circuits, the addition of rectifiers and capacitors makes much better viewing the amount of energy increase. The human eye is not able to see the dark moments between fast flashes of lights and cannot detect dark times between bright flashes.

The lamp experiment has been done to simplify the process, but as can be seen, the current of energy is not steady through the R1. So its average is less than that appear. (Based on practical exam of circuit 4) 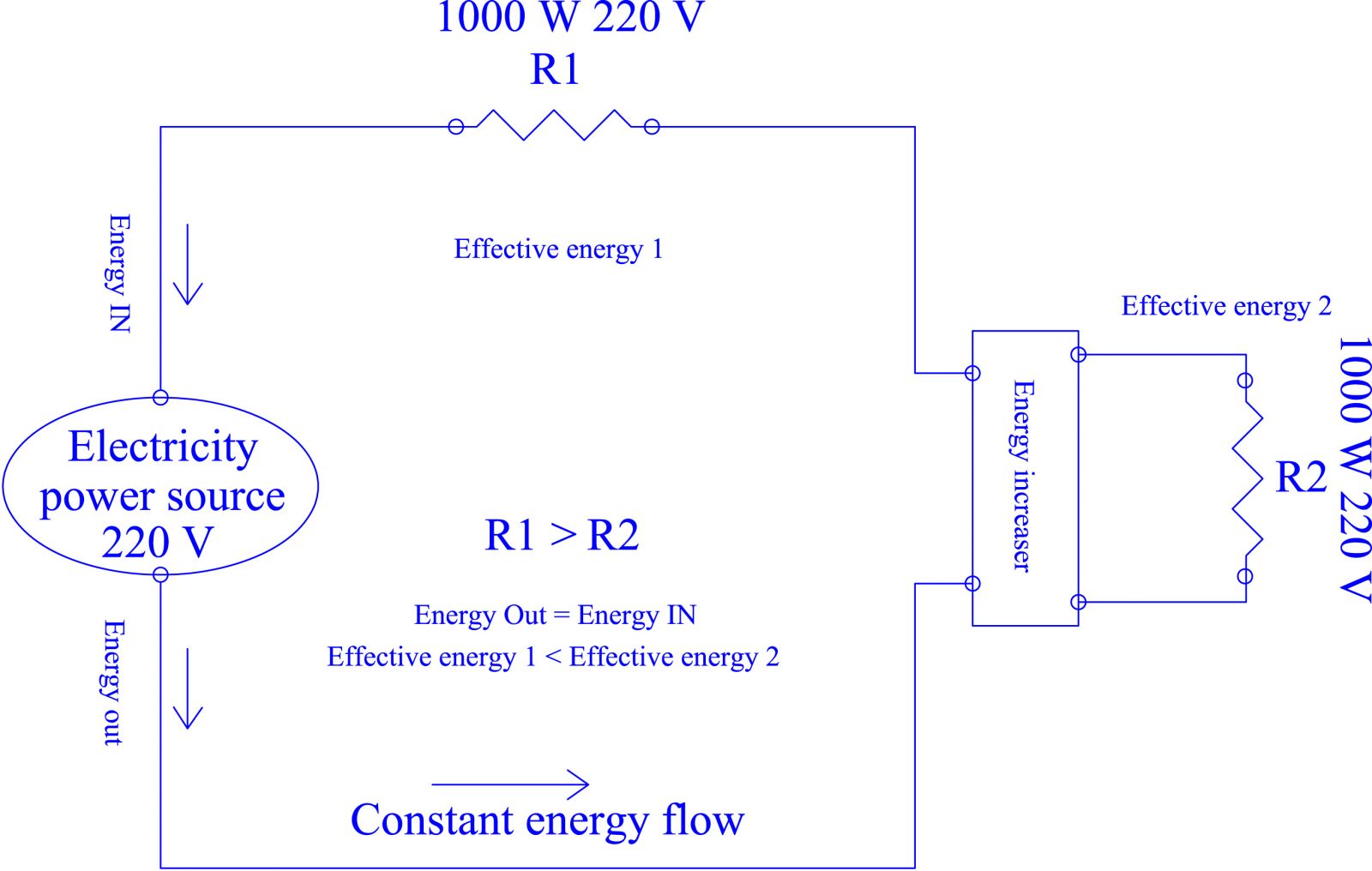 The following circuit is designed to determine the behavior of R1 and R2, and those who are interested in the subject can easily observe the performance of the power increaser.

Since the whole energy flow affects the electric heaters, the following experiment has been done to show the ability of the system for best understand.

Every particle that moves inside the circuit will have the same movement in electric heaters and will produce heat in the heaters. By comparing the heat of the heaters, the amount of increased energy by energy increaser device could be distinguish. 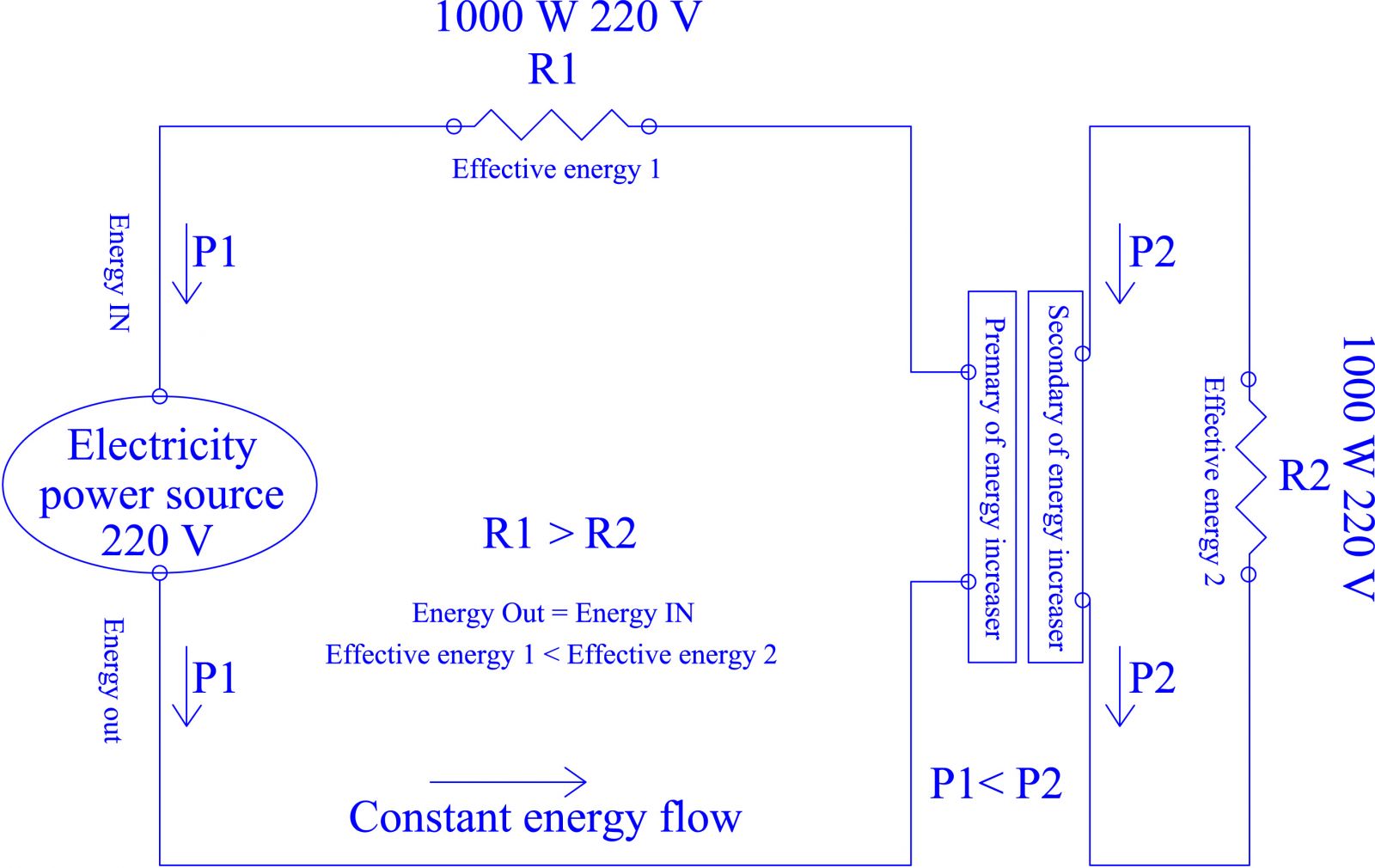 I have prepared the above subjects by using a resistance in series (bulb or electric heater) next to power source for best comparing the action of energy increaser device.

The amount of energy that comes out of from one pole of the power supply is the same as the amount passing through the R1 and finally goes to another pole. The effective energy of the R1 is proportional to the amount of voltage and current that passing through the circuit. The Material of R1 and R2 in each experiment are the same, used bulbs in my experiments converts electrical energy to heat and then to light energy, and electrical heaters converts it to heat.

The electric energy is the result of multiplying E by I.

The technology of the energy increaser device differs from what has existed so far and as can be seen, has increased the amount of energy. Because the productive energy that passes through R2 is greater than energy of R1.

To avoid lengthen this paper, I don't want to explain many and most importance benefits of technology. The advantages are so clear.

Many humans are like computers and only act on the information given to them. Hoping for the day when humans will use their unique thinking and powers.

Human laws are not permanent. Energy is increasing by new technology and will solve many of the problems of human life and also the environment. Please think more and more about my experiments and cooperate for having a better world.

Thanks for your attention,