We provide expertise in the application of optics and semiconductor materials used for photovoltaics (PV), renewable energy, and optoelectronics. As a Materials Scientist and specialist in solar...

How can we, as a community of Clean Power and Generation Professionals, help those who interface with the public about our activities and work? Why might this be important? These questions were at the forefront as some of us watched the democratic debate in Las Vegas on February 19th, 2020. Two utility-scale solar power plants were mentioned, though not by name and not with any clarity. This is by no means a political discussion and is simply provided as an example of how easily energy generation systems can be entangled in front of a large audience. Jon Ralston from the Nevada Independent asked the candidates a question. As the transcript demonstrates, Former Vice President Joe Biden tried to say a solar project's name, “Tech,” twice. Taking into account his admitted speaking issues, and the fact that he visited the Techren Solar Project in December 2019, it was most likely this photovoltaic (PV) solar plant to which he was referring. That project, in Eldorado Valley, Nevada, is being developed by Techren Solar LLC of Irvine, California. The Techren Solar I, II, III, IV, and V (which is currently in construction) will provide a combined nameplate capacity of approximately 400 megawatts (MW). Techren Solar is part of a series of power plants that represent the largest clean energy investments in Nevada history. 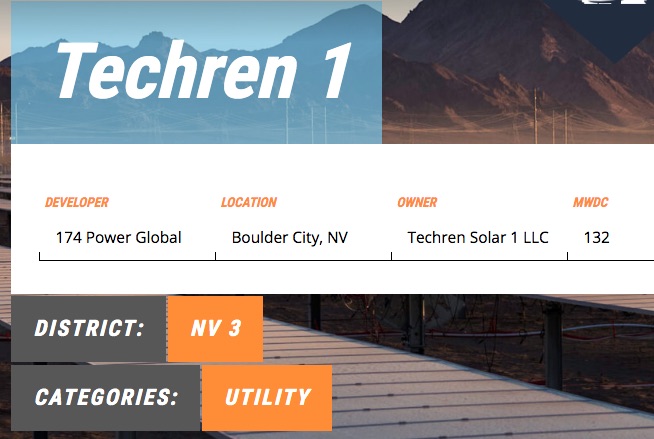 Some Specifics of the Techren Solar Project from the 174 Power Global website, https://174powerglobal.com/

Therein lies the beginning for the framing of the issue. Investors need confidence in order to finance these generation projects and get them connected to the grid. They also need to know that policy measures will be long-standing and consistent, at least until the return on their investment. Their contributors are often members of the public, as well as other financial institutions.

As the discussion continued, Former Mayor Bloomberg was visibly confused with Mr. Biden’s response and he referred, although not by name, to the troubled Crescent Dunes Solar Energy Project. The publication which he owns, Bloomberg Businessweek, published an article on it on January 6, 2020 written by Chris Martin and Nic Querolo –

This article, and the Crescent Dunes project have been discussed in other Energy Central postings. A Utility Dive posting also provides some background. The Bloomberg article cited several reasons for the difficulties, including the plant’s lack of reliability. It states, “The steam generators at Crescent Dunes require custom parts and a staff of dozens to keep things humming and to conduct regular maintenance.” So it would seem that it is a plant design and O&M issue. The issue and concern here, however, is that people, especially investors, not confuse the two types of solar technologies (PV and CSP), and specifically should not draw general conclusions from a particular CSP solar plant.

A day after the debate, I went over the dialogue in my mind and, and after a search on the internet, finally realized the full nature of the exchange. If it took a solar energy professional, such as myself, this long to understand what was being said, just consider what confusion others might have. I first posted my findings and thoughts on both LinkedIn and on Quora. I contacted both the Solar Energy Industries Association, SEIA, and several other groups, including the journalist who asked the original question. This did lead to his colleague's entry in the paper's environment newsletter. Success!

The question is whether adding such clarifications is necessary and what are the consequences of not doing so. It's also a question of how, and where, best to do this and by whom. When is education and outreach necessary for the global electric utility industry? Are there any other places where such analyses should be made available? There are a number of organizations that come to mind. The question is whether they speak for the industry and can they rapidly and effectively respond to situations in which clarification is important. The list includes: the SEIA, the U.S. DOE, NREL and the IRENA. NREL's concentrating solar power (CSP) program provides some tools for Techno-Economic Analysis. In the international arena, the IRENA has some cost analysis for CSP and other renewables. There are perhaps a myriad of others that come to your mind.

If it took a solar energy professional, such as myself, this long to understand what was being said, just consider what confusion others might have.

This is a salient point, and is one that could be applied to the nature of 'sound bite' politics today more widely, but especially in energy policy. How many non-experts have read through, for example, the Green New Deal and really understand the implications-- whether positive or negative-- of how it's laid out?

Though that's the argument for representative government and federal departments filled with the experts. We don't necessarily need to know that the elected leader is herself an expert in solar energy technology and markets, but at least that she'll be willing to hire and listen to those who are experts.

As we get ready to march towards all the elections this Fall (not just Presidential, but all the down-ticket races as well), how do you recommend that voters best identify those candidates that will represent their best energy-related interests?

Great post! One place to look for help in communicating complex information is marketing professionals. My experience in marketing for a technology company is that most engineers and developers have no idea how to communicate about what they built or why. It is a marketer's job to take the complex and turn it into messaging for each audience type. That process often if not always identifies big gaps in the engineer's thinking. Using those same skillsets, marketers can help frame the discussion with the audience in mind, be it investors or consumers.

Thank you Linda Stevens, and everyone who has read, commented on and shared the article thus far. I have reached out to some of the marketing professionals involved; as of yet, there hasn't been a reply. In the meantime, GTM is certainly part of the education/publication ecosystem and has published, “America’s Concentrated Solar Power Companies Have All but Disappeared: SolarReserve, one of America’s last remaining CSP developers, appears to have ceased operations,” Jason Deign, January 20, 2020, URL: https://www.greentechmedia.com/articles/read/americas-concentrated-solar...

Some of its most relevant hightlights that caught my eye include, "But the biggest challenge facing CSP, not just in the U.S. but also in the rest of the world, is the plummeting price of solar PV. BloombergNEF figures show the cost of U.S. utility-scale PV plunging over the last decade, from $355 per megawatt-hour in 2009 to $51 per megawatt-hour last year. The price decrease means U.S. offtakers can get solar energy from new PV plants at around 38 percent of the $135 per megawatt-hour cost that was agreed upon for Crescent Dunes. And the cost differential keeps growing as PV gets cheaper." Later, it continues, "Wood Mackenzie estimates the U.S. alone saw 13 gigawatts of PV installations last year, for instance. But for the CSP market, a 5-gigawatt increment is immense, equal to a roughly 73 percent increase on today’s global installed capacity. And since each gigawatt of new CSP would be tied to molten salt stores delivering energy over nine hours, in storage terms the plan would far outstrip all the utility-scale and behind-the-meter battery capacity deployed worldwide in 2018, based on International Energy Agency data." It's certain that the debate between utility-scale PV and CSP is far from over.

Great article Greg, I find almost anything relating to the grid and electric power that's articulated by politicians to be pretty confusing.  There is such a huge difference between concentrated solar and photovoltaics, and the complexity of technologies like battery storage.  Keep on educating, the citizenry needs it.  Thx for sharing.

, I find almost anything relating to the grid and electric power that's articulated by politicians to be pretty confusing

It's because a lot of the politicians don't necessarily understand the issues on the grid-- and that's not necessarily a knock on them, as it's hard to expect them to be experts on everything. Rather they need to be trusted to consult those who are experts. That said, listening to any major debate where energy topics come up can indeed be tough, do they understand the issues they're talking about? Are their words there the main source where the public is getting information on the topics?

[Click on the blue hypertext links above to visit these sites.]