The American power grid is often described as the most sophisticated and largest interconnected machine on Earth.  The interconnected system is made up of thousands of operating power plants, tens of thousands of substations, hundreds of thousands of miles of high-voltage transmission, and millions of miles of distribution conduit – all spread across the country.  Without this superhighway of power lines, much of the recent growth in renewable energy across the United States would not have been possible.  Moving power from remote rural areas, where most wind and large solar arrays operate, to urban load centers requires a sophisticated and highly capable web of high-voltage transmission lines, most of which were constructed decades ago to move power from mammoth hydroelectric dams and nuclear, coal and natural gas power plants.

To keep the lights on, and to support the rapid buildout of solar and wind resources, American utilities have invested more than ever in transmission and distribution (T&D), including the building of new grid infrastructure and the upgrade of aging grid structures.  This investment is expected to continue well into the future to support the addition of more renewable energy and new clean-energy technologies including battery storage and electric vehicle charging facilities – all clean-energy technologies that will help drive continued investment in T&D during the years to come.

Over the past two decades, major U.S. electric companies reported more than $605 billion (bn) in new transmission and distribution (T&D) additions, with 68% ($410bn) added during the most recent decade.  Over the ten-year period from 2010 through 2019, T&D additions have grown from $27.4bn in 2009, to a record of $56.6bn in 2019.  Most of the record spending in 2019 was for distribution projects ($33.3bn), increasing 12.2% from 2018.  Transmission projects totaled $23.3bn, also a record but only 2.8% above 2018.   Over the past decade, the average annual growth rate (AAGR) in T&D has been a robust 8.2%, this during a time when actual electricity demand, and overall rates, remained relatively flat across the country – this according to annual plant in-service statistics gathered from the Federal Energy Regulatory Commission (FERC) Form 1 filings1 by Hitachi ABB Power Grids’ Velocity Suite team of researchers. 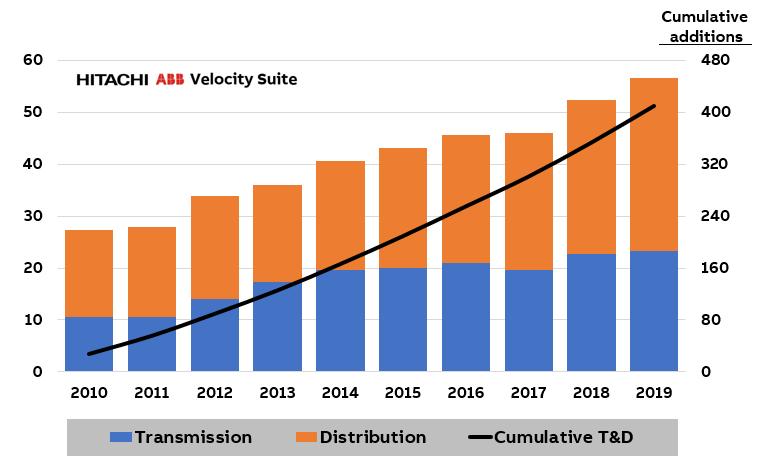 The analysis includes data from more than 270 operating electric companies – mostly investor-owned utilities (IOUs).  The reporting companies account for roughly three-quarters of all utility revenue in the country.  Making up the rest are federal power administrations, rural electric cooperatives, and public power companies including municipal and utility districts – some of which are required to report in-service infrastructure additions to FERC.  Electric plant in-service additions include the original cost of new infrastructure added during the year, making it a great indicator of company investment in the electric grid.

Investment in T&D item by item

Distribution in-service additions include many of the same categories as transmission, as well as storage battery equipment, line transformers, meters, street lighting and signal systems, and leased property on customer premises. 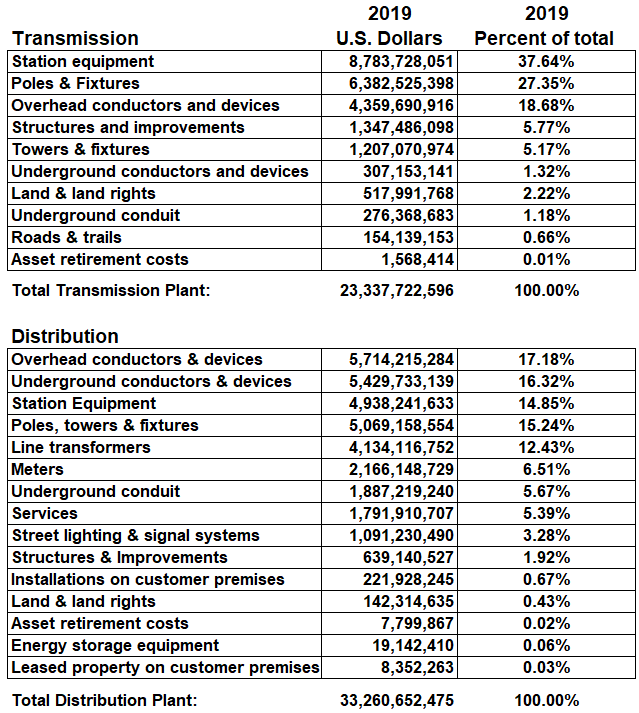 Three of the transmission categories increased in-service additions year-on-year in 2019 by more than 20%, including overhead conductors and devices (23.2%), structures and improvements (20.65%), and towers and fixtures (30.61%).  Nearly all categories of distribution additions increased by double digits from the previous year, including poles, towers and fixtures (18.4%), underground conductors and devices (15.1%), street lighting and signal systems (15.2%), and underground conduit (13.0%).

Top-10 companies investing heavily in T&D over the decade

The top-10 investor-owned utility (IOU) holding companies reported a record $220.1 billion of T&D in-service additions over the past ten years – that’s 54.7% of the $402.1bn reported by all holding companies.  The average annual growth rate (AAGR) in T&D for this group has averaged 10.2% during the period.

Exelon Corporation led the list with $30.3 billion of in-service projects coming online during the decade.  American Electric Power (AEP) is a close second with $28.8 billion, while Edison International ($25.5bn), PG&E Corporation ($23.7bn), and Duke Energy Corporation ($23.6bn) round out the top five.

Most of AEP’s T&D in-service additions were high-voltage transmission projects (66.2%), while most of Exelon’s were distribution projects (75.9%).

Major Grid Projects on the move

In early June, Minnesota Power, a subsidiary of ALLETE, announced they had energized the 224-mile Great Northern Transmission Line.  The project, estimated to cost upwards of $700 million to construct, was completed on time and on budget.  The 500-kV transmission line connects with project partner Manitoba Hydro at the Canadian border, running from the Blackberry substation near Grand Rapids, Minnesota.  The project will enable the transfer of up to 250 MW of renewable hydropower from Canada to customers in Minnesota.

Earlier this year, the New York State Public Service Commission approved the first phase of the New York Power Authority’s (NYPA) plan to rebuild the 86-mile Moses to Adirondack transmission lines.  The project, named Smart Path, is estimated to cost $484 million and is necessary to improve reliability, resilience, and efficiency, helping to enable needed renewable energy to move across the state. The project is expected to be complete by 2023.

On July 20, 2020, NV Energy announced its plans for Greenlink Nevada, a renewable energy and transmission project, slated to start construction this year and be completed by 2031 at a cost of roughly $2 billion.  The project involves two segments including Greenlink North (235 miles of 525-kV line) from Ely to Yerington, and Greenlink West (351 miles of 525-kV line) from Las Vegas to Yerington.  Greenlink Nevada will also include three 345-kV lines from Yerington to the Reno and Innovation Park areas.  The project is part of the company’s Integrated Resource Plan (IRP) which includes the addition of three solar-plus-storage photovoltaic projects, totaling 478 MW of solar and 338 MW of battery storage.  Approval of the IRP by the Public Utilities Commission is expected by the year-end.

On July 1, 2020, Central Maine Power (CMP) updated state regulators on the proposed New England Clean Energy Connect (NECEC) project.  The company is working closely with Hydro-Québec TransÉnergie on several design fronts, including high-voltage direct-current (HVDC) converters, transmission, and the border location.  The design work is expected to be complete by the spring of 2021, with an energize date by the end of 2022. The 145-mile transmission project, with an estimated cost of roughly $950 million, involves new and upgraded transmission and substations spanning from the U.S./Quebec border to a new converter station in Lewiston, Maine.  When complete, the new infrastructure will be capable of moving 1,200 MW of renewable (hydro) electricity from Canada to the New England power market.

On July 7, 2020, a Missouri appeals court upheld a decision by state regulators allowing Invenergy to acquire the massive proposed 780-mile Grain Belt Express project from Clean Line Energy.  The HVDC project is forecast to cost roughly $2.3 billion to develop and construct.  The transmission lines could move up to 4,000 MW of wind power from Kansas, through Missouri and Illinois, to a converter station near the Indiana state border where power can be marketed within the PJM Interconnection.

Growth in T&D investment to continue

Along with these recently completed and proposed grid projects, there are numerous others being planned and in development.  Growth in overall spending on new T&D infrastructure is being driven by several factors, including the replacement of aging infrastructure, the need for new transmission, and new distribution grid technology – all to enable the continued growth in renewables and clean energy technologies across America. 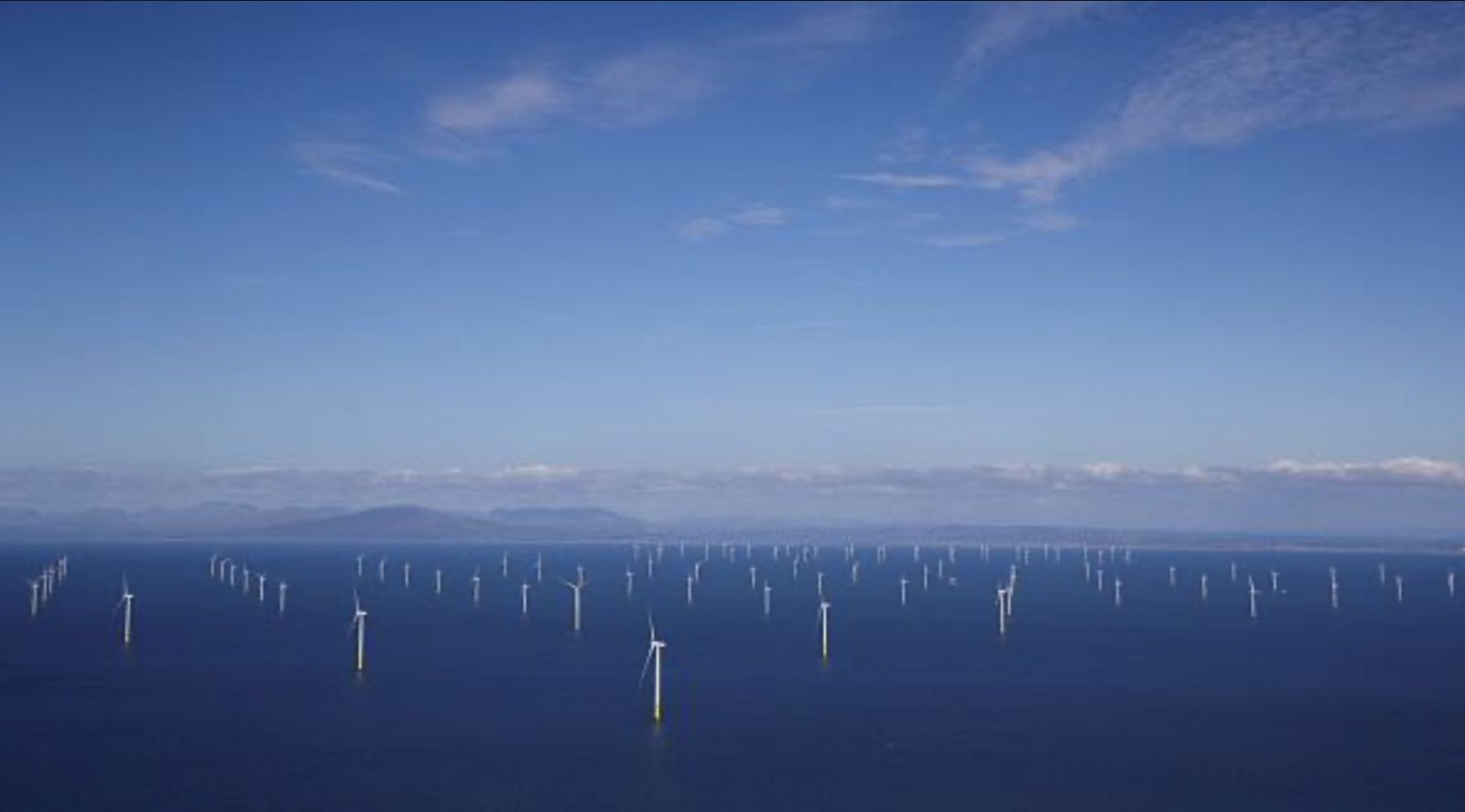 The article begins with a question it never answers, with the mysterious assumption enthusiasm alone can hasten decarbonization.If only it were that easy.