Many crops can be grown under SolaCulture canopies, but small waterborne plants are particularly attractive. Azolla can double in mass in a few days, produce its own nitrogen, and use sewage for food. Azolla can absorb >30tons/hectare/yr. of atmospheric CO2. http://theazollafoundation.org/azollas- uses/as-a-co2-sequester/

2021 global CO2 emission is ~36 billion tons. Assuming azolla can absorb 36tons/hectare/year, a billion hectares or 10 million km2 would be required to absorb the CO2 emission. The worlds semiarid regions are ~40 million km2 and deserts ~15 million km2. Fresh water regions, swamps, sewage ponds, landfills and peatlands are additional and attractive regions. The area needed is lessened by water and methane capture and can be further lessened by increased azolla productivity via selection, genetic manipulation, increased CO2, and optimized temperature and solar input.

SolaCulture systems can grow azolla on otherwise unarable lands and bury the azolla in neighboring lands to fertilize the soil. Azolla is much easier and much cheaper to bury than CO2, and fertilizing neighboring soils allows further increase in plant matter and greenhouse gas capture.

SolaCulture can reduce greenhouse gases while greatly increasing food and water supply and at a much lower cost than other means. 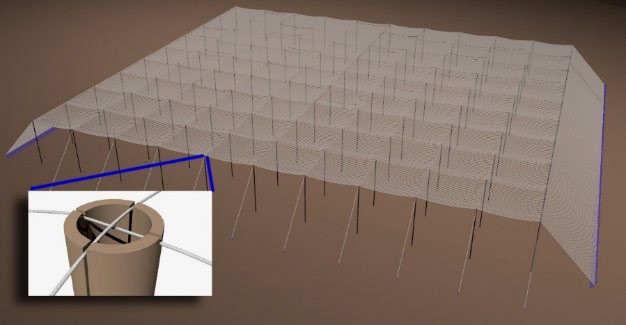 SolaCulture systems capture water from precipitation, humidity, and water evaporated within the array. Water passes through the porous canopies but its escape is prevented by continuous atmospheric air inflow created by slightly subatmospheric pressure between the canopies and the earth.

Water is the primary greenhouse gas and its transfer from the atmosphere to the earth's store is beneficial. The captured water can be returned to the array or used elsewhere. Saline and sewage water can be evaporated and collected as fresh water. Aquaponics, aquaculture, aeroponics, hydroponics, and mariculture can be practiced in SolaCulture arrays.

CO2 is removed from the atmosphere by a net increase in plant matter.

Methane capture is attractive because it can be used for heat and power in stationary and transport applications and its combustion provides water as a product. Methane is the obvious biofuel; it is not hard to create; it is hard to prevent. Big methane emitters are the low hanging biofuel and include sewage lagoons, landfills, concentrated animal feed operations, rice production, abandoned oil and gas fields, and abandoned coal mines. Satellites can now identify methane emitting regions and measuring methane emissions from space is an attractive way to identify our new energy sources rather than a means to instill fear. Methane can be liquified for storage and transport use including cars, trucks, trains, ships, planes, and rockets. Methane is an attractive energy source right under our noses or right under our satellites and we need to encourage rather than discourage its use. Economical methane to methanol means are being pursued. Microbes have solved this problem and we can use them and/or learn from them. Methanol is liquid at room temperature and much more attractive than hydrogen due to its greater volumetric energy density.

SolaCulture can provide a continuous supply of biofuel, primarily methane since the biofuel produced by microbial communities does not depend directly on solar input. The microbial communities depend on temperature and the availability of organic media and indirectly on solar input for temperature maintenance and the production of organic media. The importance of the indirect dependence on solar input is that biofuel can be available 24 hrs a day, 7 days a week, 365 days a year, as opposed to solar processes that depend directly and immediately on solar input and therefore require costly storage systems to provide full time energy availability. SolaCulture uses the local earth for plant growth, water storage, thermal storage, carbon sequestration, and as an environment for biofuel production. Biofuel energy can also be stored to match demand more closely. Biofuel production and heat storage may require a significant initiation period.

Heat and biofuel can also be used for water heating, cooking, steam production, and space heating. Methane gas can be purified and introduced into the grid.

What we are currently doing “is” Geoengineering; it is geoengineering for better or worse and it does not have to be the latter. That we require punishment to achieve climate control is a moral assumption, not a scientific one. SolaCulture can increase the usability, productivity, and profitability of land and water regions and as a consequence improve economies. SolaCulture can provide food, water, fuel, fertilizer, heat, electricity, and energy storage while reducing greenhouse gases. SolaCulture offers a profitable means to mediate the climate and has the potential for rapid and widespread implementation. If we want to cool the globe, we can, and we can do it profitably. SolaCulture canopies also provide a great canvas for artists.