WHAT ARE FLOATING SOLAR PV PLANTS?

Floating solar PV plants are an emerging form of PV systems that float on the surface of drinking water reservoirs, quarry lakes, irrigation canals, or remediation and tailing ponds.

· A floating system. Also known as pontoon, it is a sturdy structure that holds the solar panel. It is composed of a structure and a floater and it allows the installation of the PV module.

· Underwater Cable. It is used to transfer generated power from water bodies to the substation.

Floating and land-based PV systems have a similar layout, other than the fact that the PV arrays and often the inverters are mounted on a floating platform. The direct current (DC) electricity is generated by PV modules, gathered by combiner boxes and finally converted to alternating current (AC) by inverters. The PV systems, as well as the inverters, are anchored to the bottom, but it is also possible to connect them to the mainland via floating power lines. The design of the anchoring and mooring systems- which are used to keep in place the floating platforms, will depend on a wide range of factors such as water level and its variability, bathymetry, soil conditions, float type, and wind load. 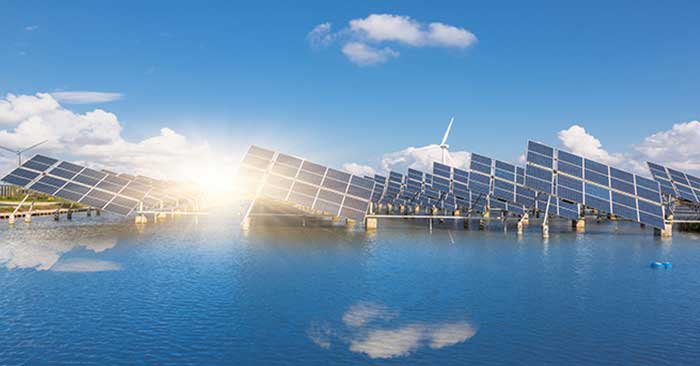 The first floating PV system was built in 2007 in Aichi, Japan. American, Danish, French, Italian and Japanese nationals were the first to register patents for floating solar between 2007 and 2014. However, initially, these small-scale systems were built for research and demonstration purposes. The first commercial installation was a 175 kWp system built at the Far Niente Winery in California in 2008 – according to the World Bank Report “Where Sun meets Water”. Medium-to-large floating installations (larger than 1 MWp) began to emerge in 2013, but nowadays they are developed worldwide.

According to the World Bank, with a global potential of 400 GW under very conservative assumptions, floating solar could double the existing installed capacity of solar PV but without the land acquisition that is required for ground-mounted installations. As there are more than 400,000 square kilometers (km2) of man-made reservoirs in the world (Shiklomanov 1993), the floating solar has a theoretical potential on a terawatt scale, purely from the perspective of the available surface area. Since 2013 the capacities of floating PV power plants have increased manifold. As of mid-2018, the cumulative installed capacity of floating solar was approaching 1.1 gigawatt-peak (GWp), the same milestone that ground-mounted PV reached in the year 2000. Currently, most of the worldwide installed capacity of 1,100 MWp is in Asia, which is currently still leading the wave of floating solar. 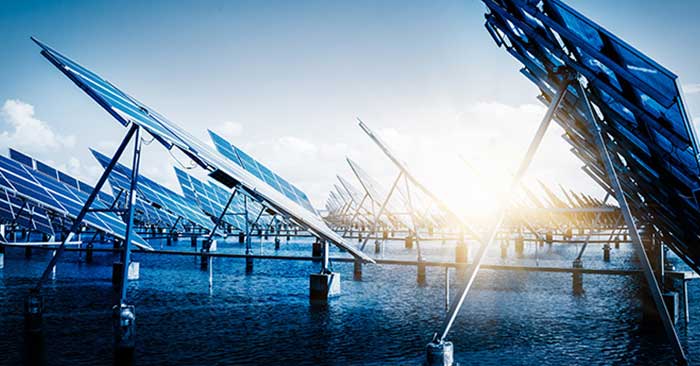 · Floating solar power generating systems typically generate more electricity than ground-mount and rooftop systems due to the cooling effect of the water.

· As the PV system is placed on a water surface, it avoids all the hurdles of land acquisition and all the concerns of land consumption.

· Floating PV plants can reduce water loss due to evaporation, depending on the surface covered and climate conditions. Also, CEEW estimates that around 7,000 ~ 20,000 liters of water per MW are required in the cleaning of a plant. The cleaning water used in the floating PV system goes into the water body again which can be reused leading to savings in water and its associated cost.

· There is a proven increase in the output of the system, which can be attributed to the reduced operating temperature of solar modules resulting from natural cooling from water. Additionally, these systems if installed in huge water bodies may have less settled dust on them resulting in increased energy output from the plant.

· This kind of PV installations does not rely on any fixed structure as the foundations used for the land-based plants. This means they are faster to be deployed and easier to manage.

· Geographically any water bodies with abundant sunlight can be used to install floating plants.

Being a relatively new technology, there are still many factors that will need to be analyzed in the long term.

· Lack of experience, knowledge, and testing of floating PV plants