On March 19, 2020, the Federal Energy Regulatory Commission (FERC), proposed new revisions to its electric transmission incentive policy to help stimulate the development of new transmission infrastructure.  The reforms will align closely with the Commission’s current statutory obligation through Section 219 of the Federal Power Act (FPA) that was added to the Energy Policy Act of 2005.

On July 20, 2006, the FERC implemented a transmission project stimulus package through Order-679 and then added additional guidance through a policy statement written in 2012.  Order-679 was created to encourage developers to take on high-risk transmission projects by allowing a myriad of economic incentives including return-on-equity (ROE) adders and full recovery of prudently incurred costs like pre-commercial and abandoned plant costs.  The order also allowed for creative capital structures, accelerated depreciation, and other incentives to support transmission development.

The implementation of Order-679 spurred a tremendous amount of investment over the past 12 years – with data compiled by the ABB Velocity Suite research team from FERC Form-730 filings, it’s estimated that more than $65 billion in capital expenditures (CapEx) has been invested in the nation’s high-voltage transmission grid because of Order-679 incentives.

A closer look at transmission investment over time

Driven by attractive Order-679 investment incentives, sometimes as high as 300 basis point adders to ROE rates, companies started an unprecedented buildout of high voltage transmission infrastructure.  In 2013, during the last year of the nearly $7 billion Texas CREZ buildout, transmission in-service plant additions increased by 33.2% for major electric utilities across the U.S.1   Electric plant-in-service additions include the original cost of new infrastructure added during the year, making it a great indicator of company investment in the electric grid.

Over the seven-year period from 2012-18, the average annual in-service transmission additions increased at 12.3% per year, while during the past five years, overall spend on transmission averaged over $20.6 billion per year. 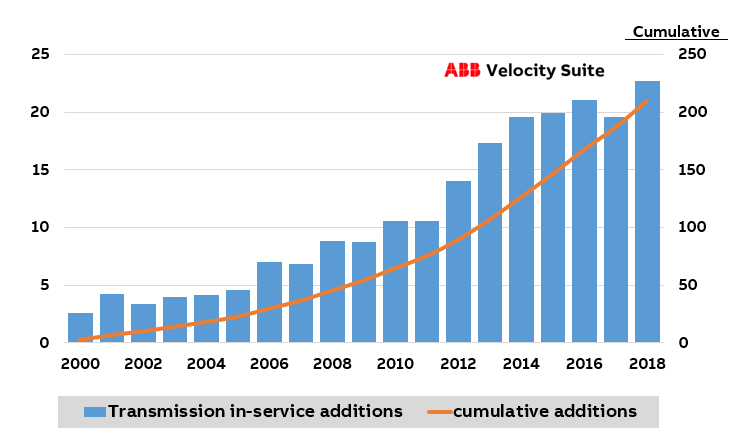 The decision to revise the current policy is driven by the change in how transmission is planned, developed, operated and maintained today, which is quite different from the original intent of the Order written back in 2006.

According to the Commission’s announcement, the proposed rules will shift the focus from granting incentives based on ‘risk’ and ‘challenges’ to a process based on benefits for power consumers, improvement in reliability, and economic factors.

The proposed Order would enhance approved ROE rates in the following way:

The new proposed rules would replace the ‘nexus test’ that based ROE adders on a “zone of reasonableness” with a 250 basis-point cap on total ROE incentives. The change, according to FERC, implies that base ROE and transmission ROE incentives serve different functions.  It should be noted that the new NOPR has retained many existing incentives, including those related to construction-work-in-progress and hypothetical capital structures.

There are several recent announcements that support the need for high-voltage grid projects including:

The proposed changes are particularly relevant today with the recent high-growth in utility-scale wind and solar generation capacity across the U.S., including the tremendous number of renewable projects currently in the interconnection queues in organized and independent power markets.

Comments on the transmission incentive NOPR are due 90 days after publication in the Federal Register.

1The ABB Velocity Suite research team compiled the data from the Federal Energy Regulatory Commission (FERC) Form-1 annual filings that included 273 operating electric companies – mostly investor-owned utilities.  Each reporting company must meet at least one of the following criteria; over one million MWh of total annual power sales, over 100 MWh of wholesale power sales, or report over 500 MWh of wheeling either for, or by, other companies.