Entrepreneur with over 40 years consulting experience in Asia's trade and technology transfer world. Over the last 10 years mainly engaged in developing projects for renewable energy production...

We, humans, tend to develop tunnel vision, think atomistic-ally - or as we call it in Germany “Schubladendenken” (drawer-thinking); dwelling in our singular drawer and not being able to look into the neighboring one. If it’s cold we heat, if it’s hot we use air conditioning in the worst case with electricity from coal-fired power plants. A holistic approach would suggest improving the insulation and using renewable energy. The neighboring drawer frequently contains a different or even an innovative solution.

The same atomistic thinking we can observe in agriculture. The United Nations Energy Program UNEP and the CACC (Climate & Clean Air Coalition) are actively campaigning against agricultural field burning with educational programs but still with very limited success.

Farmers in many parts of the world, after the harvest, set fire to agricultural residues like Paddy stubble and wheat straw to clear the fields before sowing new crops. While this practice may be fast and economical, it is highly unsustainable, as it produces large amounts of harmful substances like particulate matter PM 2.5, black micro carbon, and of course CO2, CO, and other harmful gases, including methane. In addition, it reduces the fertility of the soil. Most farmers are aware of these effects but don’t see any alternative for an economical solution to their problem. In India’s Punjab and Haryana, the hotbeds for Paddy stubble burning, even hefty fines have not substantially reduced the incineration habits.
https://youtu.be/gqhMeVQcZdw

But it is not a specific Indian problem as this NASA MODIS satellite photo of Indochina shows. The evaluation of the satellite photos suggests that worldwide over 10 billion tons of crop waste are incinerated every year. 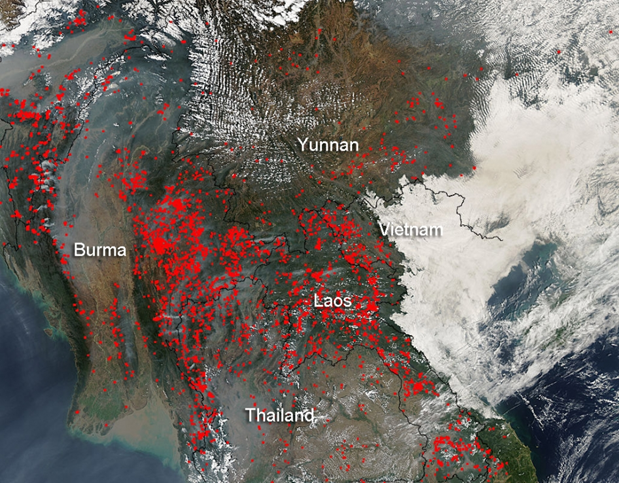 Let us think more holistically. Instead of prohibiting and penalizing field burning, instead of trying to reeducate the farmers, let’s see if we can offer them a more attractive solution. There is a way of resolving two or even three problems at the same time. The technology to convert lignocellulosic biomass into renewable, carbon-neutral diesel fuel is already available and ready for the market. This will initially just resolve the burning problem by adding value to a waste product and will potentially improve the revenue situation of small-scale farmers.

In our holistic approach, we have also to look into some drawers next to ours. For example, the maritime industry around the world is currently under heavy pressure from NGOs and public opinion to lower its carbon footprint. However, ships, like airplanes, are very difficult to decarbonize - there are very few commercially viable alternatives matching the high energy density of diesel fuel.

Larger vessels have been propelled by the worst fuel thinkable, HFO, a highly viscous goo with 3.5% sulfur content that has to be heated to 60°C (140°F) to even be used as an engine fuel.

Since 1 January 2020 the International Maritime Organization IMO mandated the use of VLSFO (Very Low Sulfur Fuel Oil) with a maximum sulfur content of 0.5%. But for the maritime industry, it did not end there. Due to the higher environmental consciousness of their customers, many large companies have now their own agenda to rapidly reduce their carbon footprint. Many of them like Amazon, Walmart, IKEA, etc., are also customers of shipping companies. They have formed alliances like coZEV (https://www.cozev.org/img/FINAL-coZEV-2040-Ambition-Statement_2021-10-18...) and the Sea Cargo Charter Association (https://www.seacargocharter.org) to create verifiable reductions of carbon dioxide. Of course, to reach this goal, they need to contract with shipping companies that are equally environmentally conscious and can offer reduced CO2 emissions. This is not possible with fossil VLSFO, LNG, or other fossil fuels, and the alternatives like hydrogen, ammonia, and methanol, which are currently the darlings of the maritime industry, require huge amounts of renewable electricity for production, which then is not available for households, industry, and electric vehicle. For example, the first eight container ships that MAERSK has ordered to be propelled by green methanol would require all electricity from wind and solar power in Denmark to produce the required green hydrogen. And that are only eight ships out of 700.

When our partners in India, Farm2Energy Pvt Ltd., collect the Paddy stubble and we use it for conversion to renewable, carbon-neutral fuel oil, we are resolving two problems at once. The farmers have no longer the responsibility to remove the stubble or are running the danger of being fined. This is already a substantial economic benefit. However, after we have established our business securely, we can later purchase the material for a fee, improving their economic situation and providing an incentive NOT TO BURN.

Creating a high added value to agricultural waste offers many opportunities to resolve problems in the agricultural industry. For example, the Philippine sugar industry is concentrated on Negros Island. The sugar campaign lasts for eight months. Farmers and agricultural laborers are experiencing a “valley of death” of four months, where they don’t have any income. For us, the four months are also a problem, as we have no feedstock to convert into diesel fuel. This can be bridged with purpose-grown biomass like hybrid Napier grasses that have a very high yield per hectare. 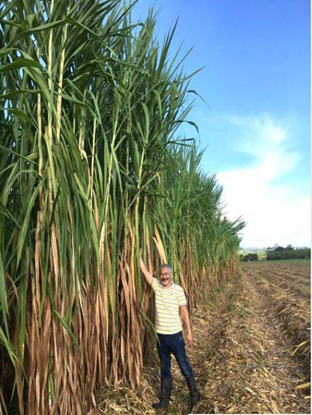 This will on one hand give farmers income during the “valley of death” and also bridge our feedstock gap, allowing us to constantly deliver carbon-neutral fuel to our customers. And there is a third benefit - the sugar mills are normally operating a biomass power plant fired with the bagasse. They are exporting part of the electric energy to the grid and bridge the “valley of death” with coal. Planting Napier hybrids can supply them with renewable feedstock and allow them to continue producing green electricity. A win-win-win situation.

Hydrogen, ammonia, and methanol produced with renewable energy are zero-emission fuels, which means the exhaust from vehicles and ships is only moisture. However, currently, there is no or not enough green hydrogen available. Over 99% of hydrogen for fertilizers and other products is produced with the Haber-Bosch process from coal, lignite, and natural gas. To replace the roundabout 120 million tons of black, gray, or brown hydrogen with green hydrogen, more than 4500 TWh of green energy would be required. That is more than all existing wind and solar power plants in the world will produce in 2022. Nothing would be left for EVs, households, and industry. How realistic is even that?

The comparison of the green electricity consumption for the production of one ton of oil equivalent (toe) is convincing. 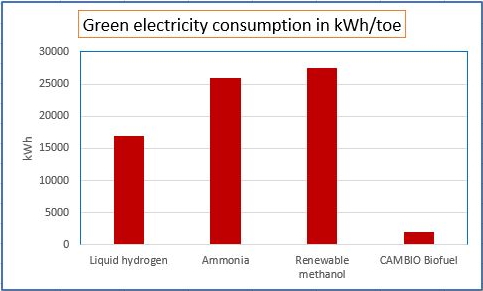 When we are utilizing otherwise field incinerated residue for our diesel, we can even be carbon-negative. In other words, when a ship travels a mile, the CO2 emitted from the stack is less than the CO2 in form of lignocellulosic biomass the plants are collecting from the atmosphere. Such a vessel in principle collects CO2 by using the renewable diesel fuel. How can that be?

Let’s go back to our situation in India. In the three states of Punjab, Haryana, and Uttar Pradesh every year about 40 million tons of Paddy stubble are burned. 40 million tons of rice Paddy release 60m tons of CO2, 35m tons of CO2 equivalent (carbon monoxide CO, methane, and other harmful trace gasses) 120,000 tons of PM10 and PM2.5, ash, and black carbon as well as 80,000 tons of SO2. Such climate pollutants - including black carbon, methane, hydrofluorocarbons, and ozone – are powerful climate gases with global warming potentials many times that of carbon dioxide.

In total, this earns us carbon credits and makes the fuel not only carbon-neutral but carbon-negative – CLIMATE POSITIVE. Farmers could thus feed not only people but also power the maritime industry.