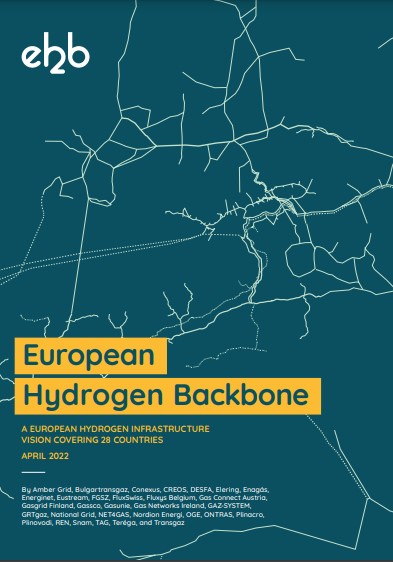 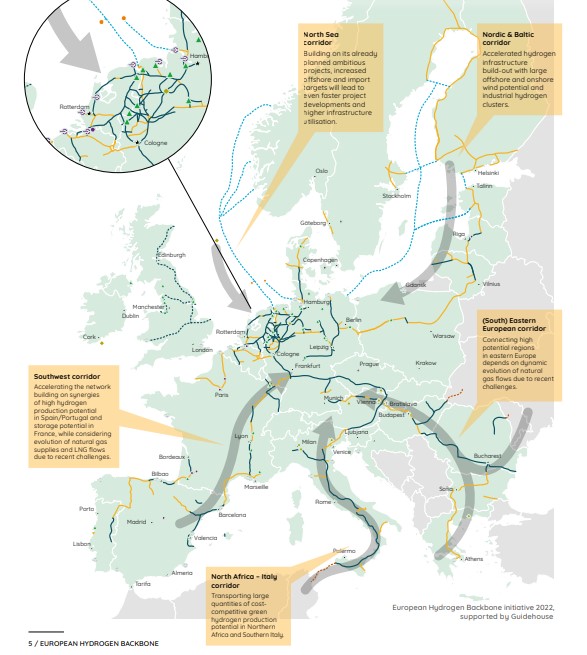 To achieve the EC’s ambitious Fit for 55 and REPowerEU goals, and to foster an accelerated development of the European Hydrogen Backbone as shown, this paper presents the following levers to facilitate implementation of infrastructure projects.

The EHB recommends introducing in the REPowerEU plan the establishment of import corridors, including all infrastructure requirements, as a political objective. Establish a more integrated energy system planning of hydrogen, natural gas, and electricity infrastructure at Member State level.

Simplify and shorten planning and permitting procedures for renewable energy and hydrogen projects. Red tape is a major hurdle to the deployment of renewables and hydrogen projects across Europe. Governments and the EU can support project deployment by introducing frameworks for rapid mapping, assessment, and allocation of suitable land for infrastructure projects; and by defining maximum processing times for environmental, permitting, and planning applications. Unlock financing to fast-track hydrogen infrastructure deployment.

Flexible economic models to incentivise investment in hydrogen infrastructure during the volatile market ramp-up years should be explored. On a national level, countries can subsidise upfront capital investments to mitigate utilisation risk during the early years when volumes are scaling up. The EU can also incentivise private project financing and make funding mechanisms such as the Connecting Europe Facility (CEF), Important Projects of Common European Interest (IPCEI) and Horizon Europe funds, available to project developers and promoters. Encourage international cooperation and create intra and extra-EU energy and hydrogen partnerships.

In order to maintain the quality of hydrogen, the EU must create EU-wide accepted standards, regulations and certifications for the production and consumption of hydrogen. It must also enforce these standards on the imports of hydrogen. Member States can explore symbiotic energy and hydrogen partnerships with future exporting countries, either through EU programmes such as Strategic Partnerships for the Implementation of the Paris Agreement (SPIPA), or bilaterally, such as Germany has done with multiple countries from Morocco to the UAE in order to stimulate trade, energy imports, and technology exports.

Working with LPO: What is a Conditional Commitment?

With LPO's announcement this month of another conditional commitment for U.S.

Docket No. ER23-523, MISO
Working with LPO: What is a Conditional Commitment?
The NeuConnect UK-Germany Interconnector Project Progresses
New Ammonia Import Infrastructure Under Development Across Europe