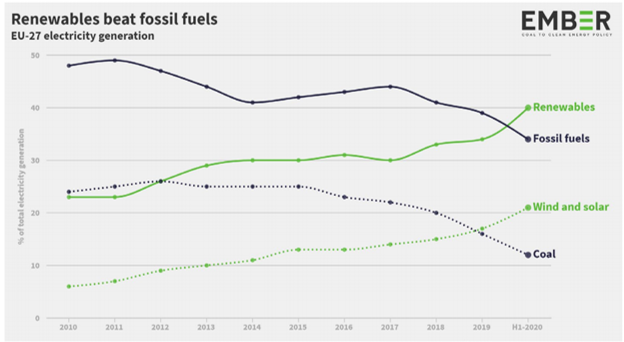 2. Renewables rose by 11%. This was driven by new wind and solar installations and favourable conditions during a mild and windy start to the year. Wind and solar alone reached a record of 21% of Europe’s total electricity generation, and reached even higher penetration in Denmark (64%), Ireland (49%) and Germany (42%). Although electricity grids have coped well with record wind and solar penetrations, negative prices are highlighting inflexibilities in supply and demand that need to be addressed.

3. Fossil fuels fell by 18%. Fossil was squeezed on two fronts: by rising renewable generation and a 7% fall in electricity demand due to COVID-19. Coal took the brunt, falling by 32%. Of that, hard coal generation fell 34% and lignite fell 29%. Even gas generation registered a fall of 6%, falling in eleven countries. As a result, EU-27 power sector CO2 emissions fell by about 23%.

4. Germany’s coal generation collapses below Poland’s for the first time. Poland now generates more coal-fired electricity than Germany, and also as much as the remaining 25 EU countries combined. Whilst most other countries, including Germany, have a plan to phase out coal, Poland doesn’t yet have a plan.

Yes thank goodness it's a changing world. If the USA and others didn't subsidies fossil fuel and Nuclear it would change EVen faster. It may already be too late but we must try.

The KJ Show Episode 29: Shining a Light on Solar Energy

Every week, I host 'The KJ Show,' which offers a mix of breaking news and practical advice on how the energy industry affects the consumer. During this fast-paced show, I combine weekly energy updates with conversations with leaders in the energy..

Rick commented on ...
Analyzing the Most Severe Risks of Climate Change and Climate Alarmism
It is hard for me to relate to any of this climate alarmism anymore.
Energy Central Jobs
Featured Jobs
More Jobs