In its 2017 low-carbon Technology Radar, Lloyd's Register, the non-profit research arm of the world's premier insurance exchange,  found that energy industry participants by and large believed that renewable energy had achieved cost parity with conventional grid power resources. Despite growing realization and acceptance of the “urgent need to decarbonize economies” and society, hydrocarbons remain predominant in the global energy mix, however, the report authors highlight in the foreword to the 2018 edition of the Technology Radar, the second dedicated exclusively to low-carbon power.

The problem of human greenhouse gas emissions and climate warming is inextricably linked and global. So is the goal of successfully making the transition to low or zero-carbon energy, but solutions aren't uniform, Lloyd's Register points out. “In fact,” according to the report, “the best energy ecosystem for any given country depends on a set of characteristics that are specific to that nation – including the natural resources available, geo-demographics, energy demand, market design, policy, technology, public appetite and social acceptance. It needs to take into account what resources are available, how can they be harnessed, how the population and industry needs and uses power (and will in the future) and therefore how the network needs to operate and adapt.”

With that in mind, in its 2018 Technology Radar, Lloyd's Register explores the degree to which renewable energy has gained traction throughout the world, as well as what can be done to accelerate adoption.  Acting on Lloyd's Register's behalf, Longitude Research surveyed 792 energy industry executives employed by companies involved with renewable energy in one way or another. 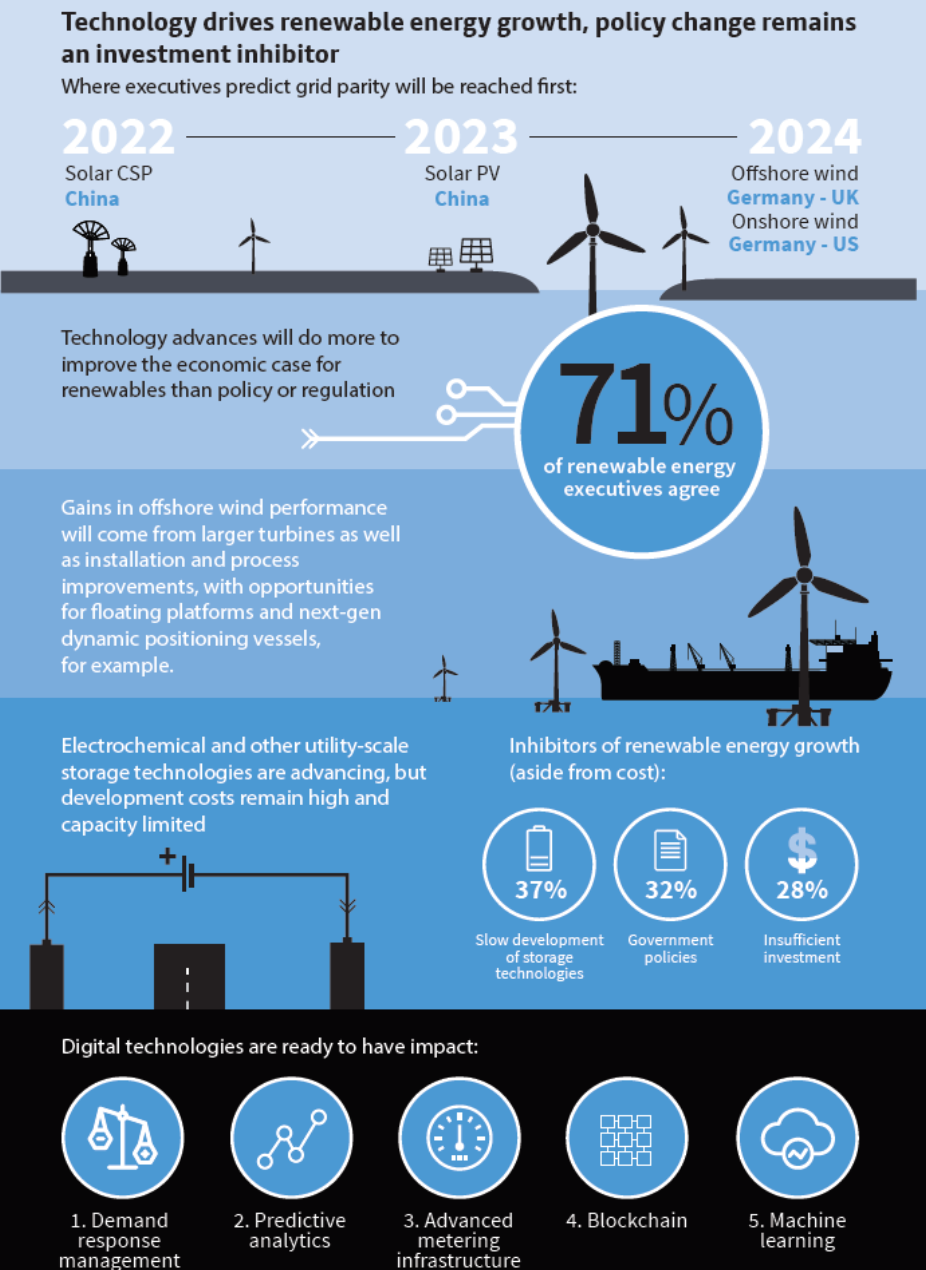 Lloyd's Register's latest low-carbon energy survey is also global in geographic scope. Twenty-eight percent of respondents are based in the Americas, 24% in Europe and 23% are in Europe. The remainder was made up of industry executives in the Middle East and Africa.

The report starts off on an optimistic note, at least if you support the notion that we need to transition to clean, renewable energy. “If there were doubts that renewable energy sources can compete with oil, natural gas and coal in power generation, developments in the past two years should have disspelled them,” the authors state in the report's introduction.

They go on to note that, according to the International Energy Agency (IEA), “2016 was a record year for renewable energy projects, which provided two-thirds of new global power capacity.” Furthermore, they point out that China, the country with the most solar power generation capacity in the world, as of July 2017 had already realized its 2020 target for installed PV capacity. In addition, the report authors write: 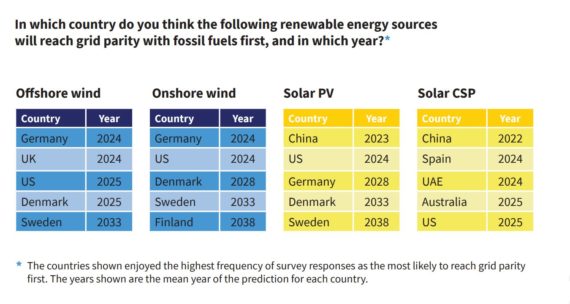 The number and capacity of solar and wind power projects installations with low or zero subsidies continues to grow, the report authors continue. In addition, the cost of electricity produced by the combination of solar or wind power generation and lithium-ion battery energy storage is fast approaching parity with electricity produced by conventional, fossil fuel resources. Some industry participants and observers see all this as an economic “tipping point” for renewables, Lloyd's Register points out.

That optimism is tempered somewhat by other views expressed by survey respondents and Lloyd's Register's analysis and interpretation of data and opinions. “Basing this sort of assertion on individual projects is a risky move,” the report authors state.

“After all, every project has its own circumstances and economics, and these can differ—sometimes considerably—even within the same country. Nonetheless, tipping point predictions do provide an indicator of the progress made to date and of what is still required to reach the point where renewables overtake fossil fuels in each country’s energy balance.”

Lloyd's Register goes on to provide “an industry perspective on the challenges that need to be overcome for renewables to become the primary form of energy consumed in countries.”

Overall, survey respondents were cautious regarding their expectations of when renewables, collectively, will overtake fossil fuel power generation. They singled out technological innovation in various, relevant fields as having a significant impact regarding renewable energy generation, transmission and storage over the next five years. Energy storage and digital energy technology systems figured prominently in this regard.

Among the other key findings cited by Lloyd's Register: