China is currently in the throes of a hectic initiative to increase national energy production as part of an effort to expand its economy and its middle class. This resource crusade is exemplified by projects such as that depicted in the header which is a $5.4 billion scheme to transmit solar energy from Tibet. The amplification of societal functionality does not solely involve providing additional resources because of the need to service the increase of a country's population.

Economic class has a significant impact on rates of resource consumption because wealthier individuals have proportionately larger resource footprints. The task of meeting future energy needs is one that is particularly daunting. Frankly, for many countries such as China, meeting resource goals to effectuate a transition to a middle-class economy is challenging, if not potentially being a real life mission impossible. However, by carefully considering options and taking stock of underappreciated resources, the "impossible" becomes eminently feasible.

Understanding China's challenge to transition to a middle class economy and the role of energy is important as approximately half the world's population functions below the level of a middle-class economy.

The inherent challenges with achieving these transitions will not easily abate unless completely unexpected solutions or radical changes to base metrics for societal functionality materialize. What is particularly compelling is that a relatively straightforward analysis can be done to buttress these assertions and, more importantly, provide insight for charting feasible paths forward.

Quantifying the Relationship Between Energy Footprint and Economic Class

In 1971, Dr. Earl Cook of Texas A&M wrote a groundbreaking paper entitled, "The flow of energy in industrial society" (Scientific American, 224(3): 134-48). In this article, he made an analysis of per capita energy requirements for various technological levels of civilization. Per capita energy requirements comprise the total amount of energy needed for food, transportation, and other support features that a person utilizes in a society with a particular level of technological sophistication or societal functionality. Complex levels of societal functionality require more energy with larger energy footprints and are generally associated with greater levels of economic class, prowess, and wealth. The graph below uses Dr. Cook's approach as a guide to compare the energy footprints of three significant economies, US, the EU, and China fall in Cook's. The energy footprint calculations for the three economies are detailed elsewhere. 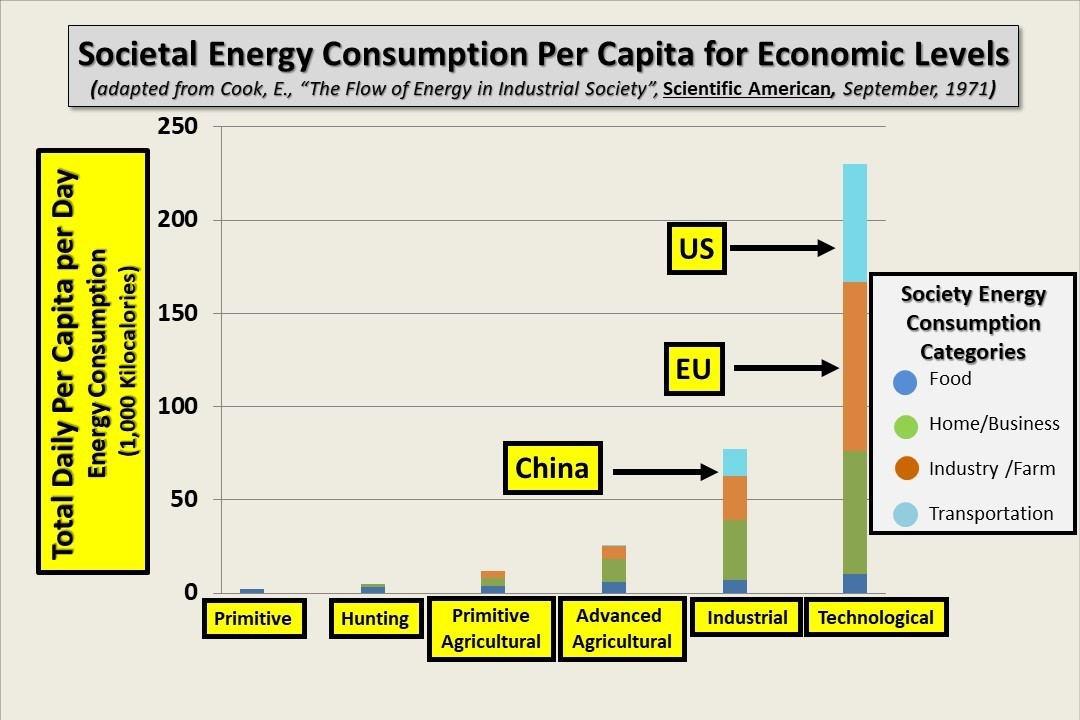 The US has by far the largest footprint while the EU is about half-way between China and the US. To get people into a middle class economy, this analysis uses the EU footprint of 123,000 kcal/capita/day as a planning goal.

Using the thinking of Cook and the chart above, one can estimate the increase in energy supply needed to transition China into a middle class economy. First, we need to determine how many people need to be transitioned to middle class. China's current middle class population is about 400 million and the government goal is to increase the middle class to about 800 million which would make this economic segment about 60% of the total population.

The next step is to estimate the energy footprint for populations enduring energy poverty The energy poverty criteria are used to calculate an energy consumption level for these populations and convert the number into Cook's nomenclature and units. The result is 1.3 1000 kcal per capita per day. The increased energy needed to propel 400 million people to the middle class is to first compute the difference between middle class and poverty level energy foot print ((123,000 - 1,300) kcal/capita/day) and then multiply the difference by 400 million capita.

The analysis indicates that the Chinese will have to provide an energy increase of about 70 QUAD per year to transition 400 million people into the middle class. This results in a 55% increase in China's energy consumption since total annual energy consumption currently stands at 3,200,000 ktoe which is about 127 QUAD/year.

Energy Options for Transition to a Middle Class Economy

So what are the design criteria and the options for the Chinese? The preference is to favor renewable energy options while including fossil fuel options for the time being. The final plan will likely be a mix. Given that different energy sources have a wide range of land use requirements and that China already has large swaths of land already dedicated to solar and wind, it is prudent consider the impact that technologies have on sustainable land area. The logarithmic plot below shows the land area requirements needed by different technologies to produce an additional 70 QUAD per year of energy. Clearly, wind and solar energy systems are apt to put a strain on land resources while options such as coal and nuclear 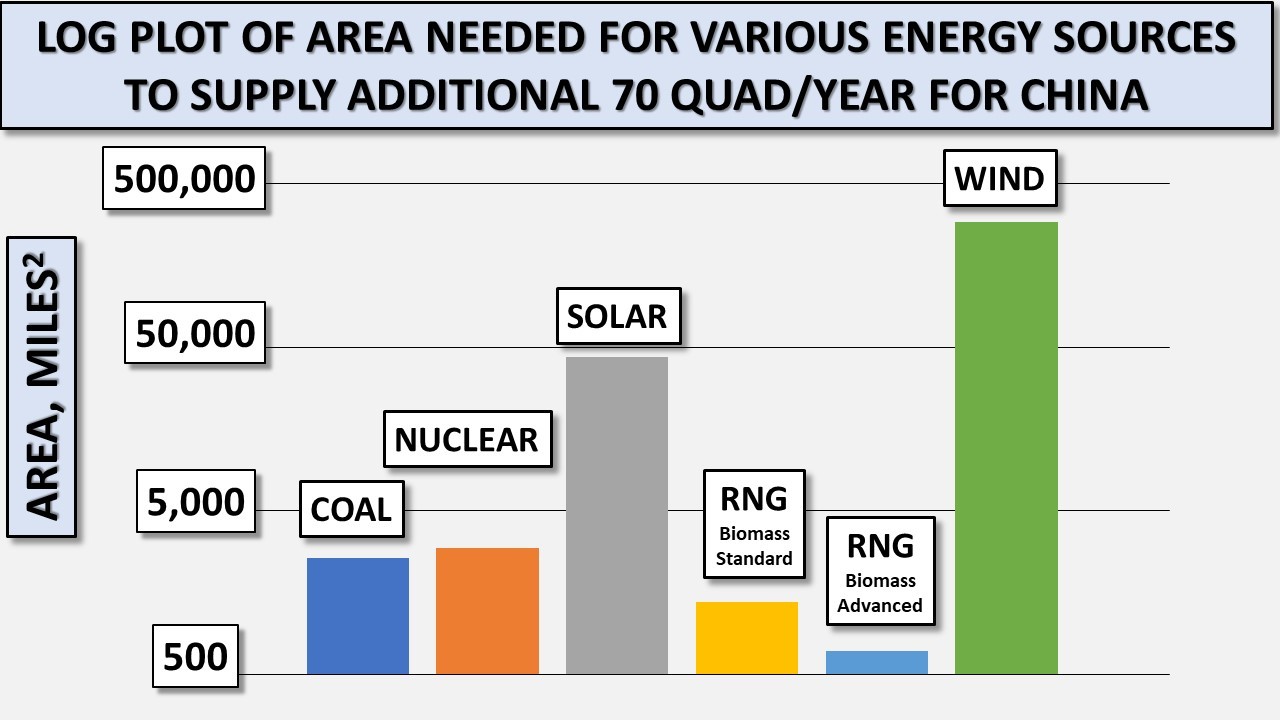 are more efficient with land use are fossil fuel based.

This is noteworthy because China's annual production of biomass is approximately 5 billion tons of coal equivalent (TOE) which represents a potential renewable energy source of about 200 QUADS per year. There has been interest in China in RNG production from biomass but its importance now seems more compelling. This is stated given the abundant biomass resources that are available and the need to increase energy production to meet the government goal to increase the middle class. Additionally, China is likely to have existing infrastructure that can be readily modified to implement anaerobic digestion systems relatively quickly by leveraging existing installed assets and avoiding and minimizing the normal complications, costs, and implementation time associated with deploying a multitude of greenfield constructed systems.

Understanding China's challenge to transition to a middle class economy and the role of energy is important as approximately half the world's population functions below the level of a middle-class economy. Government goals call for transitioning 400 million people into the middle class over 15 years which requires a concomitant increase in national energy production of 55%. Conventional solutions such as wind, solar, and fossil fuel energy are unlikely to efficiently meet these goals by themselves. However, biomass energy solutions offer an attractive option that leverages the country’s prodigious biomass availability as well as existing infrastructure assets that can play a role in the energy transition.