The Emergence of Hydrogen in the Distributed Energy Resources Marketplace With over 13 years of experience within the energy and engineering industry, Justin has energy expertise serving both public and private clients in the fields of energy management, generation...

As climate change continues to put pressure on several markets including utilities, both on infrastructure and the balance sheet, some companies such as National Grid, Ameren, XCEL, and Southern California Edison (SCE) are pushing forward with aggressive decarbonization strategies by 2050 and are seeing the rewards from investors. Recent analytical studies by BlackRock and Morgan Stanley indicate that companies that “address climate-related physical and transition risks earn higher valuations from investors” and those that don’t, lose out.[1] Many utilities are looking toward renewable Distributed Energy Resources (DER’s) to attain this decarbonization. Whether the utility chooses the DER strategy to consist of solar photovoltaic (PV) or wind, the limitation always remains that the peak demand is not coincident with renewables production and therefore hard to support. Some utilities are turning to large scale storage banks to support the peak but batteries are just as limited as regional applications, such as Solar or Wind, due to limitations on any non-weather dependent deployment. How can utilities turn toward cutting carbon and still produce enough electricity to support peak demand without fossil fuel burning plants? One answer may be hydrogen. But, is hydrogen always “green” and how can it be used effectively?

Internal combustion with hydrogen is not always carbon neutral. While burning hydrogen is a carbon neutral activity and impacts Scope 3 emissions positively, the hydrogen itself may not be produced in a carbon neutral application. The number one methodology for producing hydrogen in the U.S. (accounting for ~95%) is known as Steam-Methane Reforming, whereby natural gas – which contains methane (CH4) – reacts with high pressure steam in an endothermic process and the off gasses are carbon monoxide (CO) and hydrogen (H). The hydrogen is captured, and the CO is released. This process yields a “dirtier” form of hydrogen as the carbon is released to the atmosphere.

Although when burned, hydrogen does not produce or emit any carbon products. Less pure forms of hydrogen can produce nitrogen oxide (NOx), which is also harmful to the environment. Most current applications of hydrogen combustion also include a mix of natural gas – so while a better alternative, the process still emits a fair amount of carbon. Not all hydrogen production is “dirty” however.

Unlike Steam-Methane Reforming, hydrogen produced either by biomass (burning organic matter), biogas (organic gas), or electrolysis can be considered clean depending on the processes used to create it. Although burning biomass and biogas releases CO2, the carbon is typically “viewed” as being recycled as the fuel source (e.g. plants, etc.) captures almost an equivalent amount of that carbon from the atmosphere, and therefore provides no additional contribution to the net emissions.[2] When coupled with renewable technologies, electrolysis is probably the cleanest form of hydrogen production. 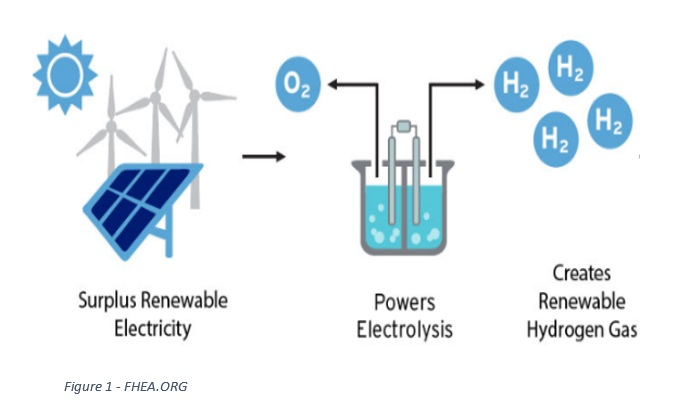 Electrolysis is the process of using electricity to split water into hydrogen and oxygen (see figure 1). This reaction takes place in a unit called an electrolyzer. Electrolysis is a very energy intensive process, but large renewable productions that have surplus capacity could be harnessed to produce hydrogen gas, which can be used within peaking plants, fuel cells, or combined heat and power (CHP) plants. Using renewable hydrogen gas would allow utilities to handle the peak demand problem that is left over when they convert most of their fleet to renewable technologies.

Hydrogen contains approximately three times (3x) the energy content as gasoline. The problem occurs in that it is about four times (4x) less dense than gasoline and therefore the challenge is siting versus storage, or both. Effectively getting the hydrogen to its point of use presents the unique challenge of more widespread or significant use. Using converted natural gas pipelines can facilitate distribution, however, require major modifications to the existing infrastructure, as does mixing with natural gas or major new construction installations. Large scale storage can happen in salt mines, which are ideal for storing hydrogen at high pressures, and for lengthy periods which then allows for use in demand management more applicable for merchant grade applications. Small scale storage vessels, local or on-site production using electrolyzers are better suited for smaller commercial usage applications such as fertilizer, steel, cement or other industrial applications.

The United States Department of Energy (USDOE) and the National Fire Protection Association (NFPA) have created permitting guidelines and a regulatory process to provide information about relevant codes and standards for hydrogen and fuel cell technologies. The NFPA has introduced NFPA 2 - Hydrogen Technologies Code - to provide a single reference to support the design and approval of hydrogen equipment and facilities.

Many utilities are already utilizing a DER strategy within their portfolio to diversify power generation sources as well as move toward a more renewable topology. The typical DERs currently found in the market are solar and wind, though these elements are dependent on weather and often can only provide intermittent or inconsistent power. In the future, higher market volatility is expected as more of the solar and wind assets come on-line thereby building a greater need for stored energy to smooth out the peaks and valleys. Traditionally, large power banks, or batteries, are used but those technologies are limited in discharge time and do not provide enough of a sustained application. 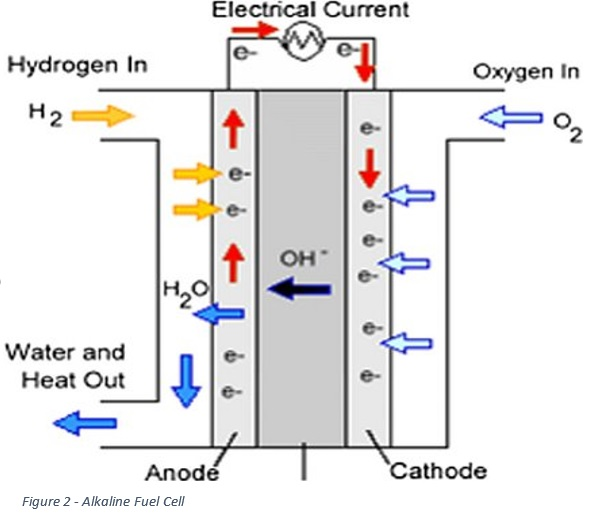 In lieu of batteries, Alkaline fuel cells are a significant asset that utilities can utilize to address the inconsistent power in conjunction with solar or wind. Alkaline fuel cells differ from polymer electrolyte membranes (PEM) type fuel cells due to their ability to receive industrial hydrogen and their inherit stability (see figure 2). As an example, a net zero power plant system could consist of traditional renewable technologies like solar or wind providing surplus electricity to produce hydrogen which in turn fuels and can be stored as energy in Alkaline fuel cells.

Additionally, because they can be easily fueled with hydrogen, and they are both modular and scalable, the fuel cells could also be used as stand-alone assets where traditional technologies aren’t applicable. Other hydrogen fueled alternative assets that could be considered would be CHP plants or reciprocating internal combustion engines (RICE), coupled with renewable hydrogen fuel.

Hydrogen is a major solution toward the 2050 NetZero Target

Tough challenges in our utility marketplace are typically overcome with adherence toward disruptive technologies. Hydrogen fueled DERs are proving to be that disruptor. On the small-scale, hydrogen backed DERs can provide local micro-grid resiliency to hospitals, pharmaceutical companies and campus environments, etc. While on the large scale, renewable production of hydrogen fed into the peaking operations, as well as potentially to the customer as a new natural gas, could prove to be the significant event the market is searching for. A recent October interview of Danielle Steward at National Grid (NG) revealed that NG is doubling down on the success of hydrogen as they look toward achieving their 2050 target of net zero emissions. As utilities march toward cleaner energy, DERs that smooth the intermittent production will be paramount to a stable electrical supply to all end customers. Renewable hydrogen gas applied to these DER’s appropriately will provide a runway for the utility to succeed in their targeted goals.

Is there a challenge with losing economies of scale by pairing H2 with distributed resources instead of larger utility-scale plants or even dedicated large-scale production facilities dedicated to hydrogen?