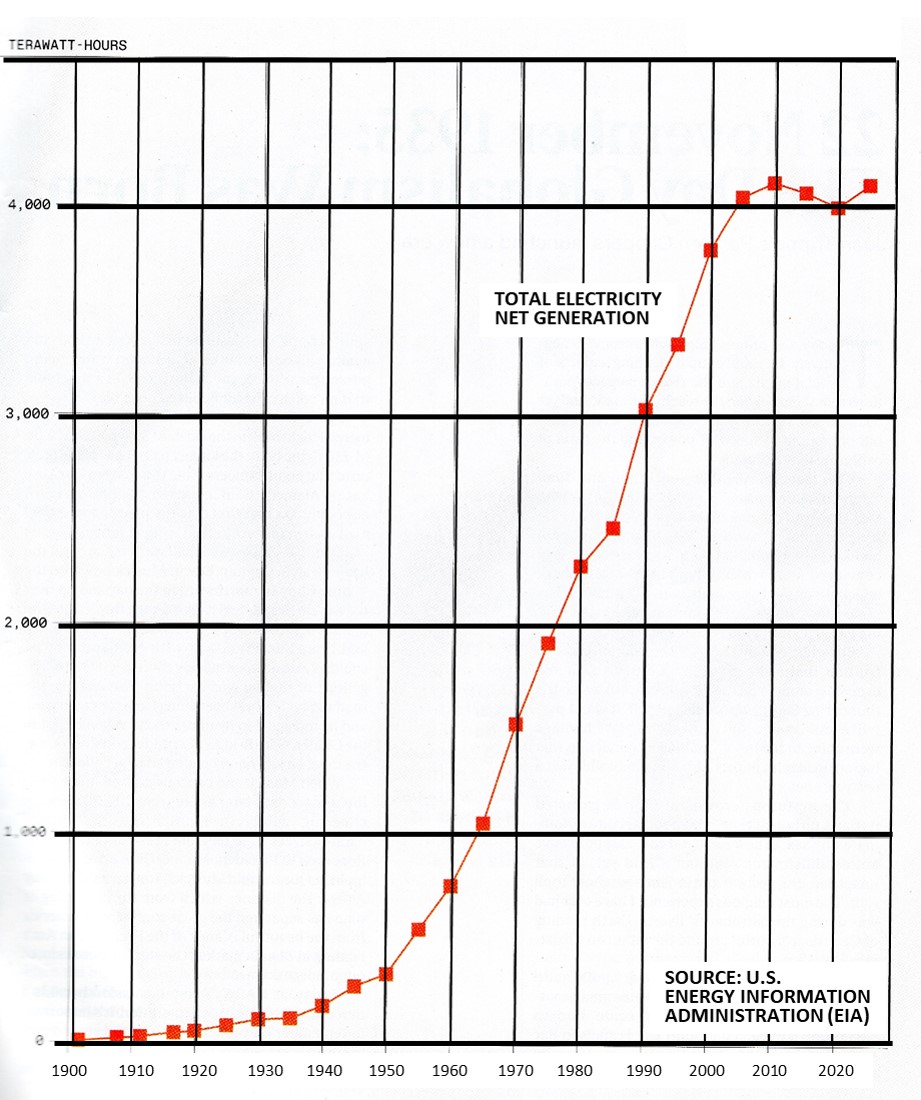 My June IEEE Spectrum had an interesting chart in it, and I’ve used this as the main image for this post.

This is obviously the U.S. Electric consumption over time. There was also some interesting commentary on this, some of which I’ve excerpted in this post. But what I’m really interested in is what this tells us about the future, which is also covered.

Seems to me the green energy religion is going to run into a variation of Margret Thatcher’s observation, namely sooner or later you run out of other peoples money.

The unfolding events in Europe should provide a pretty good example of the impact of massive increases in the cost of energy driven by profoundly stupid policy - namely zero carbon emissions while relying on unreliable energy resources.

My guess is the governing class of Europe is likely to see whole scale revolt as energy bills go through the roof.

in passing, the fundamental assumption behind the unfolding disaster is that CO2 drives climate. That is nonsense. The climate is driven by very complex planetary energy transfers of solar energy. CO2 is, at best, a minor bit player relative to the complexity of moving energy on stupefying scales over time and space.

We are suppose to spend trillions of dollars on fundamentally flawed and unprovable claims by those attempting to line their pockets at the expense of the majority. How convenient for the elite minority.

You say CO2 is a bit player and shouldn't be used as an excuse to drive policy. Okay. Let's say CO2 doesn't matter and that climate change discussions are moot.

In the real world, the only thing that matters is economics. It drives everything. Sure, governments can meddle, a billion here a trillion there, but if you go against market forces you're pretty much guaranteed to fail, and that goes for Russia and China, just ask them.

Europe's problem is that they're so reliant on external energy supply, that when the supply is manipulated, the market crushes them. The answer is to not be reliant on external supply, which is what they're trying to do (a little late, and a little short). From a purely economics perspective (not environmental, security, or long-term waste), nuclear is out. EDF may go bankrupt building Hinkley in Britain. France wants to stop nuclear operations, not because of politics, but because of excessive $/MWh. Coal is out. Again, not because of CO2 emissions, but because of $/MWh. Gas is out, because of, well...Russia. Renewables are on the upswing, not because of politics, but because of $/MWh. They're cheap...and reliable. However, they're in their infancy relative to GW. Not enough GW have been built to overcome Russia's supply disruption. So what does Europe do? Germany turns coal plants back on, which is about all they can do.

The lesson is to pay attention to economics and not be in the position to pay ransom to a dictator. Europe will build more renewable power generation because it's cheap, reliable, and free from dictators. However, it will take time. Meanwhile, Europe will return to dirty, nasty coal, and really, really expensive nuclear to get through the hardship. Oh, and the US will send boatloads (literally) of LNG. Sure, it may raise the market price of $/MMBTUs in the US, but that's politics, er...economics.

I agree the driver should be economics.
In my view, the Europeans formulated stupid policy based on a mindless adherence to a dogma that the planet is doomed by CO2. That fixation completely overwhelmed common sense.

The Europeans (primarily the Germans who started two world wars) created the mess and the U.S. is, once again, suppose to bail their sorry asses out. The only folks I would help out are our NATO allies who have have honored commitments on spending for their own defense, including the sometimes difficult French.  The Germans can go pound sand, as far as I am concerned.

Also, there is zero probability that green energy can cover all of Europe’s energy needs. There is not enough available  land (and sea) area to pull that off. The unreliable nature of solar and wind nature make the problem even worse.

In passing, the dumb fixation on green energy has already resulted in stupefying energy bills for the consumer. The problem will become vastly worse this coming winter, compliments of no Russian gas and profoundly stupid policy on the part of the ruling elite.

Thanks for the comments. Now it's my turn.

I read a lot of books and articles that do not go into what I write for Energy Central. Right now I'm Reading "The Rise and Reign of the Mammals" by Steve Brusatte. This is an excellent book, and the point I wish to bring out is that there have been several mass extinctions. The asteroid that killed the dinosaurs (and made room for mammals, including us) you probably know about, but there several earlier mass-extinctions, and at least one of these was caused by massive volcanic events that spewed many gigatons of carbon dioxide into the atmosphere, but this was over several million years, so the life-forms had time to adapt, and a few actually survived (including mammals' pre-cursors). Now we are pumping a like amount of CO2 into the atmosphere, but over decades, not millions of years, I find this frightening.

Yesterday, Livermore, CA (where I live) broke an all-time heat record - it was 116 degrees. No, the record was not for 9/5 in any year, nor for September in any year, but for any day in any month for any year. I don't know how long temperature records have been kept, but Livermore was first settled around 1800. Today it's forecast to be 117 degrees, which would break yesterday's record.

I agree that stopping greenhouse gas emissions is not particularly difficult. Since I write about it, I know that we have the technology to do this today. We will also develop better technology in coming years. I'm also reasonably sure that California will meet our climate goals. The rest of the U.S. and World, not so much. See my post for today.