States and power industry companies are in full support of offshore wind development along the eastern seaboard.  Recent announcements confirm that the owners of U.S. East Coast oceanfront power plant properties are vying to play a key role in the offshore wind rush expected during the next decade.  As early as 2035, the Atlantic coast could be home to roughly 24 gigawatts (GW) of offshore wind capacity, this according to project data compiled by ABB’s Velocity Suite research team.  Most of the projects are currently in early-stage development.

The shift from retired nuclear and coal power plants to marine terminals, equipped with new sophisticated high voltage direct-current (HVDC) converter stations and energy storage facilities, in just a few years, is a remarkable rebound.  The economics of utilizing these well grid-connected sites with undersea cable from large offshore wind projects is extremely attractive.  The move to obtain interconnections and plan infrastructure is a sign that the now nascent offshore wind industry, is about to get interesting.

Three promising brownfield sites have been highlighted prominently in the news in recent weeks.  They include two former coal power plant sites, Brayton Point (MA) and B.L. England (NJ), and the Oyster Creek (NJ) nuclear power plant located along the Jersey coast. If all goes to plan, the sites will become marine terminals and major substations for offshore wind projects. 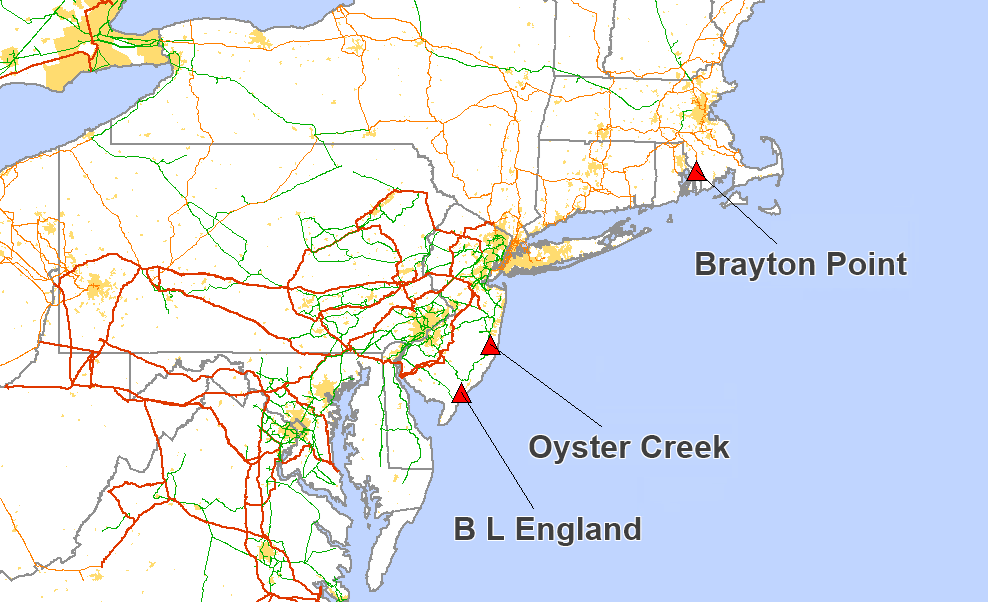 In late March, the Commercial Development Company Inc. (CDC) announced that the demolition of the 50+-year-old, Brayton Point Power Plant had progressed to the final stages across most of the 1.5 million-square-foot site.  The company’s goal is to prepare the brownfield property, located in Somerset, Massachusetts, to serve as a marine support hub that offshore wind development for a staging and manufacturing center for equipment needed to support the offshore wind industry.

CDC purchased the Brayton Point facility in early 2018 and has since invested steadily to redevelop the site.  The redevelopment plan is to utilize the same attributes that made the power plant productive over the last 50 years, including the use of the 300 acres of industrial waterfront property, a 34-foot deep water port capable of berthing large Atlantic ships and utilize existing access to onshore transportation.

In May 2019, Anbaric Development Partners (ADP) announced it had signed an agreement with CDC to establish a 1,200 MW HVDC converter station and a 400 MW battery storage system to support offshore wind development. 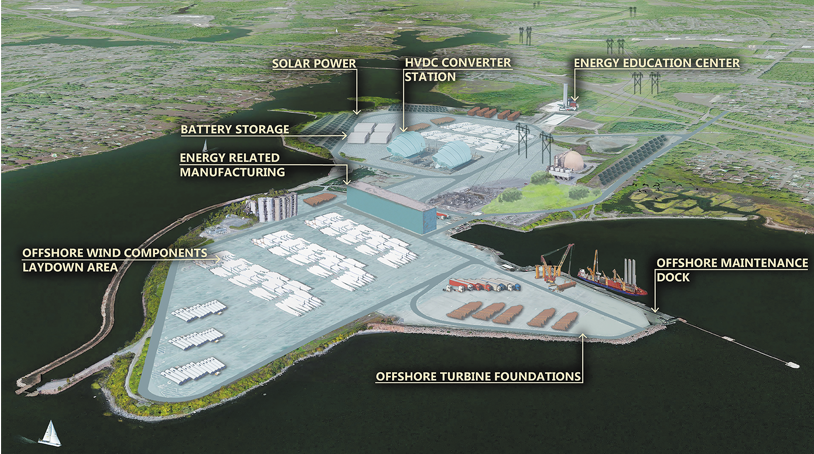 In the Brayton Point redevelopment update, CDC indicated they have engaged in several extensive discussions with major offshore wind companies, including businesses in manufacturing, logistics, cable interconnections, maintenance, and other bulk materials.

At about the same time the CDC released the company’s development status report, on March 27, 2020, the New Jersey Board of Public Utilities (NJBPU) met in Trenton and approved a filing by Ørsted, one of the world’s largest developers of offshore wind, to interconnect the company’s planned Ocean Wind offshore development project at the site of the retired coal-fueled B L England Generating Station at Beesley’s Point, New Jersey.  The company owns the Block Island Wind Farm, the only operating offshore project in the U.S., and holds leases on hundreds of thousands of acres off the Jersey coast.

Until recently the B L England site was being considered for the development of a natural gas power plant, but due to the ramifications of building a gas connector pipeline across protected forest lands to support the project, the developer dropped it from consideration.  The New Jersey state “100% by 2050” renewable energy goal also weighed heavily on the decision to scrap the gas power plant project.

This marks the second approved interconnection agreement to support Ørsted’s 1,100 MW Ocean Wind LLC project.  The Ocean Wind project will be built about 15 miles off the coast of Atlantic and Cape May counties.  Back in September of 2019, Ørsted received approval for connection at the site of the now-closed Oyster Creek nuclear power plant in Forked River, Lacey Township, that retired in 2018 after nearly 50-years of service.  At the time, the NJBPU cited the project is expected to reduce the cost of transmission system upgrades and is in the best interest of ratepayers.

Ørsted officials stated that the acquisition for interconnection rights at B L England would save on transmission upgrade costs.  Along with the two prime interconnection sites at Oyster Creek and B L England, Ørsted is also looking at the potential to connect at Atlantic City’s Higbee/Ontario substation.  The company has set its sights on deciding which location provides the best connection point for undersea cable from the wind farm by the end of 2020.

All three of these projects represent a chance to utilize infrastructure that once made the retired power plants major contributors of electricity to the power grid. The two coal units alone generated in excess of 10 million MWh per year until around 2010. Add Oyster Creek to the mix, and total electricity production from the three plants ranged between 14 and 15 million MWh prior to 2010. 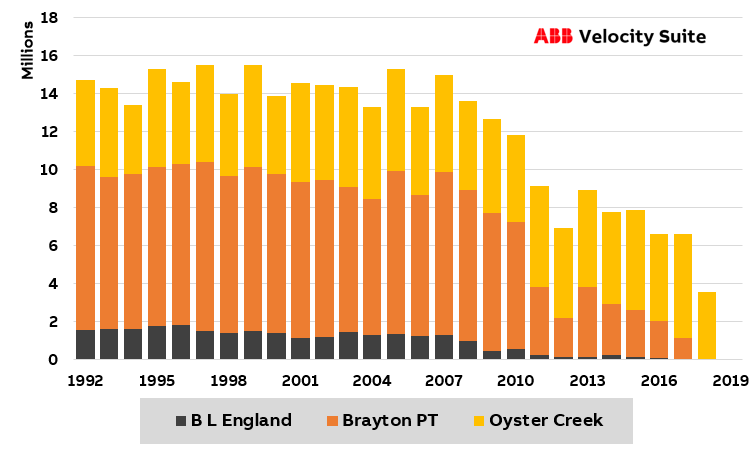 The development of onshore support facilities for the offshore wind industry depends partially on the time it takes for development companies to secure contracts and the speed at which projects gain federal, state and local permits.  Driven by the need for carbon-free power to meet state renewable energy goals, the nascent U.S. offshore wind industry is in a strong position to take off.

Kent-- can you comment on what sort of cost efficiency gain is experienced by projects being put in where this infrastructure already exists?

Matt, I wouldn't be able to pinpoint in detail the cost efficiency savings you're refering to below but there are numerous value propositions provided by the redevelopment and development companies including access to large staging areas for the heavy offshore wind equipment needed for offshore wind construction.  Also, the deepwater ports that exist at these former plant sites make it easier and more cost efficient to move equipment from staging to the windfarm locations.  In addition, the abillity to save money by utilizing the sites existing high-voltage grid infrastructure that ties into the three major organized power markets along the eastern seaboard stands out.  The use of existing sites is good for redevelopment and new construction.

It’s a significant prize and has done wonders for ports, East and West in the UK: