It’s been an intense few weeks, with the World Hydrogen congress in October, a role at COP26; then delivering hydrogen and offshore wind training to the Philippines and Vietnam.

The UK’s East Coast hydrogen cluster launched in Parliament this week however, and I’ve finally found time to gather my thoughts and share such business intelligence with the community.

As the two northern powerhouse 'red wall' English clusters Humber and Hynet were awarded a quarter of a billion pounds while, somewhat contentiously, the Northern Scottish Hydrogen Carbon Capture and Storage based scheme around St Fergus, Project ‘Acorn,’ went on the reserve list.

This week a seemingly innocuous announcement hit the trade press regarding early actions on the basis of the recent grant awards. The ideas have been formulated in stakeholder sessions over the years: future-needs-gas-transmission-grid and which is now making progress.

I love maps and we use specialist GIS version when developing major infrastructure projects such a s offshore wind farms, I though t a few illustrations may be of interest?

Initial proposals show pipeline routes into Scotland. Pipelines come in around a tenth of the cost of shipping a hard to move liquid or gas such as hydrogen and if there is a decommissioning uplift so much the better!

Looking at the current methane - potentially a future hydrogen - network we see that all gas grid access points have extant or planned wind farms in proximity, ranging from celtic-sea-cluster-floating-offshore-wind to scotwind 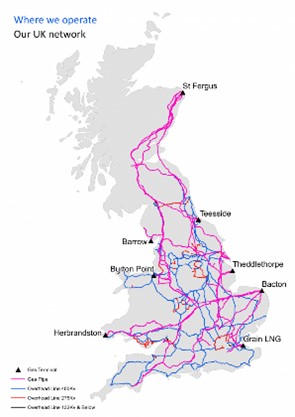 Reading the metaphorical tealeaves however, my attention was drawn to nuances between the  two variants

Early iterations still indicate piped offtake from Scotland - but an update earlier this year with Ireland appearing before Great Britain, perhaps an indication of provenance, moved things to East Anglia

Exploring Orkney this summer and then  hearing more detailed aspirations in a World Hydrogen Congress session following on from my own talk 'wind and hydrogen. Later versions are still more ambitious, indicating myriad choices for Scotland ranging from Peterhead to St Fergus and perhaps to Flotta on Orkney, home to the world’s first hydrogen economy I viewed first hand. Since then, with a 3 year delayed ScotWind finally in the offing, West of Orkney wind farm and Flotta oil terminal both made significant announcements around floating wind and green hydrogen.

These entry points may just appear as the doodling’s from a consultancy, but they could, if they become set, have more far reaching implications. I track these and, as seen earlier, here St Fergus appearing in the 2020 version.

So, what about Hydrogen East and the Westminster launch?

Looking at nuances for ‘Fit for 55’ I checked for any images showing Bacton the fulcrum?

I know Bacton from my Shell days and recently Shell itself announced a re-locating to London. This makes the company - one of the largest on the planet  - well placed to drive the UK hydrogen and energy transition agenda; Bacton could be pivotal gong forwards

‘Bacton Gas Plant, located 20 miles (32km) from Great Yarmouth is a hydrocarbon Gas processing plant of strategic national importance supplying up to 1/3 of the UK's gas supply as well as importing and exporting gas from Europe. The Plant was built and commissioned in 1968 and officially opened by the Duke of Edinburgh in 1969.

Further connections link the plant direct to the European market with hydrocarbon gas sent and received from Zeebrugge in Belgium as well as Balgzand in the Netherlands via a direct 235 km gas pipeline.

The plant uses cryogenic processes to separate the hydrocarbon components and has unique systems such as the desalination plant and waste water treatment plant which help to unlock more production. Methane gas is delivered to National Grid for entry into the National Transmission System, which through its network, provides gas for downstream domestic and industrial use.’

As diesel joins coal on the list of sunset industries refineries need to pivot or face the consequence. The pipeline ne connected gas plant at Balgzand is located north of Amsterdam but, further down the coast, lies Europe’s largest port, Rotterdam and there, we learned on 17 September:

'Royal Dutch Shell has made a final investment decision to build one of Europe’s biggest biofuels facilities in Rotterdam, the Netherlands.

Planned to be built at the Shell Energy and Chemicals Park Rotterdam, formerly known as the Pernis refinery, the new facility will have a production capacity of 820,000t a year of biofuels.

The facility will be equipped with Shell-developed advanced technology to produce low-carbon fuels such as renewable diesel and sustainable aviation fuel (SAF).

Shell said that the facility could produce enough renewable diesel to avoid CO₂ emission of 2,800,000t annually. This would be equivalent of taking more than one million cars off the roads in Europe.

The firm plans to use carbon capture technology at the facility and store the CO₂ in an empty gas field beneath the proposed Porthos project in the North Sea.

The new facility is expected to contribute to Shell’s aims to become a net-zero emissions energy business by 2050 and achieve the climate goals of the Paris Agreement.'

The graphic below adds to Dutch ambitions for Pernis and Rotterdam

Curiously East Anglia is not a formal cluster but, as with Teesside further north, is perhaps melding into a mega-cluster with a link a cross to HyNet in the North West. It is of course significantly closer to continental Europe than Orkney, St Fergus and Aberdeen. Indeed, I advised as much when last October: could-the-east-become-a-hydrogen-hotspot

Even that however is only a stepping- stone;  The Dutch route heads on to the real prize, the German Ruhrgebeit and beyond:

Certainly when seen against the wider strategic picture

Sometimes such images tell the story of better than words and the proposed workings on the European hydrogen backbone are relatively transparent.

So, according to public domain documentation: ‘Bacton has the potential to become a major UK hydrogen reception and processing terminal’ Indeed the 2040 backbone study indicates the consideration of a second link across to Holland.

Bacton, it seems, is well placed indeed to serve as the key conduit towards integrating the UK with the European hydrogen economy.

I haven't read much about this type of circular economy built into the hydrogen economy, but it's another reason for optimism for sure.