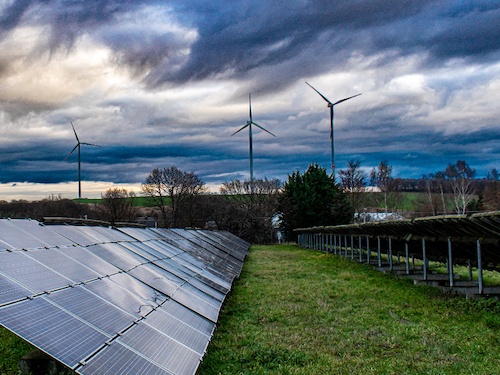 Stanford University futurist Tony Seba is laying out a path for most of the world’s electricity systems to switch to solar, wind, and energy storage over the next decade, just as BloombergNEF’s New Energy Outlook predicts US$11 trillion in green power investment by 2050.

BNEF sees wind and solar meeting 56% of global electricity demand by mid-century, and is urging further investment to keep average global warming below 2.0°C, Bloomberg Green reports. But Seba sees those technologies moving faster, producing the “fastest, deepest, and most profound disruptions ever seen in the energy industry” at a pace comparable to “the digital disruption of information technology,” RenewEconomy writes.

“What happened in the world of bits is now poised to happen in the world of electrons,” Seba’s RethinkX research team wrote in a report issued last month. “Just as computers and the Internet slashed the marginal cost of information and opened the door to hundreds of new business models that collectively have had a transformative impact upon the global economy, so too will SWB (solar, wind, and lithium-ion battery storage) slash the marginal cost of electricity and create a plethora of opportunities for innovation and entrepreneurship.”

That transformation will be triggered, they say, as the cost of producing wind- and solar-generated electricity approaches zero, and grids end up with surplus power that can be devoted to long-term storage, electrification of buildings and industrial processes, and the shift to electrified transport. (There’s also been a lot of talk lately about converting renewable electricity into “green” hydrogen.)

“Our analysis shows that 100% clean electricity from the combination of solar, wind, and batteries (SWB) is both physically possible and economically affordable across the entire continental United States as well as the overwhelming majority of other populated regions of the world by 2030,” the Stanford team wrote. “Adoption of SWB is growing exponentially worldwide and disruption is now inevitable because by 2030 they will offer the cheapest electricity option for most regions. Coal, gas, and nuclear power assets will become stranded during the 2020s, and no new investment in these technologies is rational from this point forward.”

RenewEconomy has more on how the RethinkX team sees the transition happening and what they think governments should do next.

The BNEF analysis, by contrast, still shows renewables coming on fast, but not nearly fast enough. The report projects global greenhouse gas emissions peaking in 2027, then falling 0.7% per year through 2050. That’s far short of the 6% annual reduction needed to hold average global warming below 2.0°C, or the 10% per year required to hit 1.5°. It translates into a devastating 3.3°C average warming by 2100.

The BNEF report has gas consumption growing for years to come, with demand driven largely by space heating and industrial processes. Oil consumption doesn’t peak until 2035, air travel “will continue to be one of the most difficult sectors to decarbonize,” Bloomberg Green says, and bringing green hydrogen to a point where it meets one-quarter of global energy demand by 2050 will require a 38% increase in power production and a land mass the size of India.

The RethinkX report suggests a much faster transition.

“There is a misconception that too much solar and wind energy is a problem,” said Dr. Adam Dorr, one of the report’s principal co-authors. But “that is looking at the equation through the old fossil fuel system lens, and doesn’t recognize the fundamentals of disruption. Sunlight and wind are free, and it is irrational to curtail the nearly costless clean energy we produce with them.”

As that existing system is disrupted, “the grid as we know it will rapidly evolve into a larger, more flexible, diverse, and capable system, just like the landline telephone network evolved into the Internet,” he added. That means the question for energy and grid planners to ask is: “How can a new energy system based on SWB minimize costs and maximize benefits at every level of society and the economy?”