A professional with more than 12 years of experience of assisting clients in strategy and corporate planning. Have assisted CXOs across private and public sector entities in formulating and...

As the proportion of renewable supply increases in the overall generation mix, the residual power demand, post accommodating infirm RE supply, to be met by contracted conventional supply sources fall significantly, particularly during high RE generation hours of the day. This residual demand profile resembles “duck” shaped curve. This leads to requirement of operating such conventional generation plants close to or even below their respective operating technical limitation during high RE supply hours. This scenario has already panned out in multiple countries across Europe, Australia, regions of USA. So, pertinent to ask - How far is India from the ominous Duck? 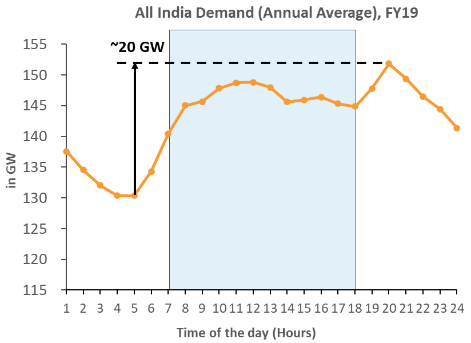 India’s power demand generally peaks in the evening (graph on the right) while the RE supply, particularly solar supply (which is more concentrated compared to other RE sources), peaks around 1200 – 1400 hours (afternoon) period. This trend will intensify as share of solar capacity in the overall generation mix increases driven by both relative economics and policy push (by 2030, solar is estimated to make 30-35% of total installed capacity as against current less than 10%). Considering the same, there has been an increasing trend of states shifting agricultural supply (only category which is potentially flexible in terms of demand shifting in a day) during solar hours. However, this strategy to align demand with incremental supply has its confines as agricultural demand makes only about 10-15% of the overall utility demand and T&D network capacity constraints restrict demand shifting. Thus this “duck curve mitigation strategy” can at best delay the inevitable by 1-2 years. Our estimate suggests that at national level, duck curve will be discernibly visible from FY2022 onwards particularly during monsoons. Interestingly, multiple states with significantly higher share of renewables in their generation mix are already witnessing duck shaped net demand curve. Currently, such demand variability is being managed by cycling of conventional generation plants primarily ISGS plants. For instance, Karnataka state with significant RE proportion in its generation mix, despite shifting its agricultural supply during solar hours, needs to resort to significantly variable scheduling of its ISGS capacity (graph below) to manage residual demand profile. Monthly average of intra-day variability of ISGS supply varies between ~0.6 GW (April, 2019) to 2.4 GW (Nov, 2019). Accordingly, the intra-day PLF of ISGS portfolio (for the proportion of capacity tied up with Karnataka) varies between 20% to 80% with average PLF being 55-60%.

Similar trend is also playing out in multiple other states including Rajasthan, Telangana and Tamil Nadu. The situation will aggravate as these states contract more infirm solar supply.

India’s ability to manage grid in such scenarios is still untested and the necessary resources like flexible generation capacity, energy storage, demand management etc. seem inadequate. As per a recent report by POSOCO in May 2020[1], India’s conventional generation capacity has limited flexibility with the report suggesting that only 36 units out of the 438 (~8%) thermal units analysed have achieved a minimum generation of 50% or lower, with only one unit (in Gujarat) operated at generation level of 40% or lower. Thus, unless adequate aforesaid RE integration resources are developed & implemented, RE curtailment is inevitable with increased RE penetration.

As per our estimate, based on above mentioned planned RE capacity target and CEA estimated India’s future demand projections, RE curtailment can increase to 10-15% by FY 2022 and >40% by FY 2030. RE curtailment is already a significant issue in many states in India including some of the ones highlighted above. Thus, it becomes imperative to realize that RE integration is a ‘now’ issue which needs effective mitigation strategy and its immediate roll-out.

Multi-pronged strategy is needed to address the above RE integration (or RE curtailment) issue and ensure that country’s power supply-demand balance is maintained along the most optimal path. Some of the key steps for the same could be:

To summarise, the increasing issue of duck shaped net demand curve and its associated challenges is already visible in India and the issue of effectively managing it without resorting to RE curtailment shall aggravate as we continue adding renewable capacity. Thus, it is imperative that the statutory bodies undertake immediate steps to effectively address it now. Failing which, renewable sector shall witness issues (like rising curtailment, PPA avoidance) adversely affecting existing and future investments in the sector.

The article first appeared in ET Energyworld on 23rd August 2020.

[1] Flexibility Analysis of Thermal Generation for RE Integration in India