Desert as a solar power plant This item is part of the Innovation In the Electric Power Industry - May 2022 SPECIAL ISSUE, click here for more

There is no question that solar energy is the most attractive form of energy par excellence, which is available for people in abundance every day in the desert areas. Worldwide exist 10 deserts and according to various scientific calculations, 1.2% of the Sahara's area would be enough to supply the entire planet with electricity.

However, although this fact has been known for several decades, at present there are 2200 coal-fired power plants in the world and only 10 largescale solar power plants built in desert areas. 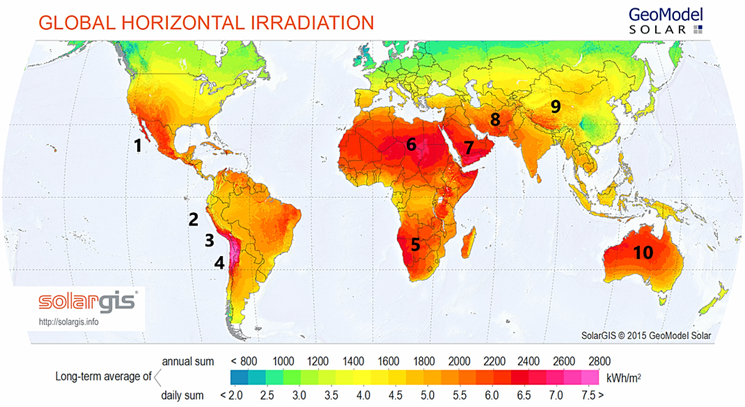 In this context, we have to ask ourselves: what is going wrong here and what is the cause of this?

We take a closer look at what tech options are currently available to us to tap into this cost free solar energy.

Concentrated Solar Power uses concentrating optics to focus the sun's rays and direct them to heat receivers. This thermal energy is then used to generate steam, which then sets turbines in motion. In this way, electricity is generated.

In recent years, the assumption has been that the larger the plants, the more efficient they must be. This assumption has been proven wrong, as demonstrated by the two solar power plants built in the Nevada desert. Both the Ivanpah Solar Electric Generating System and the Crescent Dunes Solar Energy Project are not profitable, and the latter would have to be shut down for a short time for that reason as well.

The reason the two power plants are uneconomical is primarily due to their size. The hundreds of thousands of heliostats require the most precise alignment of the mirrors and their cleanliness. Since there are strong winds and a lot of dust in the desert areas, it is not possible to meet these requirements. The mirrors are misaligned by the wind and covered with dust, which affects the optical properties of the elements. As a result, less solar radiation reaches the receivers and the targeted efficiency is lost.

With photovoltaics, electricity is generated directly.

To what extent photovoltaics can be efficient in the desert, I have already presented this in my analysis in detail in March 2019.

Both the dark color (strong heating) of the solar cells, and the dust reduce the effectiveness of the solar systems. In addition, there are enormous O&M costs.

The world's largest PV solar plant Bhadla Solar Park of about 2.7 GWp currently exists in the desert area in India.

Already the one picture from space and the other from earth show how this solar plant  is covered with dust. The solar cells should normally be dark blue, but they are grayed or gray.

The clearly visible green vegetation, on the other hand, can get rid of the dust on its own without any problems, which can be clearly seen in the picture.

According to the operator, this entire solar power plant is cleaned daily, but apparently this is not enough to keep the dust away from the solar cells. The yield losses are therefore inevitable. The same applies here, the larger the plant, the more effort there is in cleaning the panel surfaces. 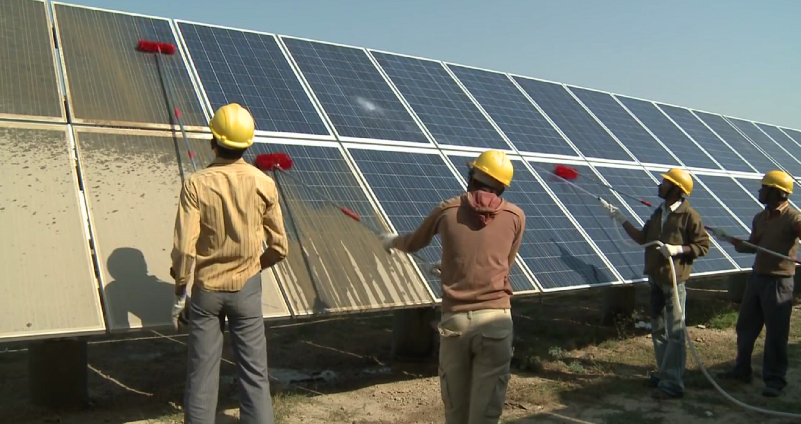 From the newly planned 20 GW SUN CABLE project, which is to be built in the middle of the Australian desert, is also not to be expected otherwise, because 12 000 hectares of huge plant must also be regularly cleared of dust. The heat and dust have the same effect everywhere, and the yield losses are already pre-programmed.

The rising cost of fossil fuels will accelerate the demand for renewable energy and also encourage other companies to secure an energy source in the desert. Therefore, it cannot be avoided that a lot of money will be buried in the desert sand in a hurry.

With all these considerations of solar power generation by PV power plants from the desert areas, it is still necessary to mention that the larger the area is covered with dark solar panels, the more heat is reflected back into the environment. Accordingly, the huge areas of solar cells would absorb much additional energy and release it as heat, which would affect the climate globally. This could lead to irreversible and unpredictable climate catastrophes that can hardly be estimated now.

This report explains this in detail.

What would be the solution here to draw solar energy from the desert and avoid all the risks and losses mentioned at the beginning?

A desert would be a big open surface but it is remote and you would have to transmit the power a long way. I think the best location would be close to the user. It can also provide shade to the user which can be very valuable in summer. An example of this is the Tempe ASU Arizona State University. They have Solar PV providing shade and power all over campus. It is a double win. Maybe triple win with no special transmission lines or additions needed.

The many systems are also seen and monitored a lot since they are right on campus. I have called and brought attention to tracking systems that were not tracking. A remote site would not have this level of observation as well as DAS systems providing numbers of the output.

Of course the best location is close to the user. I recently took a closer look at the Phoenix area you mentioned and there I see that conditions are very favorable for solar power generation. Apart from the fact that there have been more than 100 sandstorms in Arizona in the last 10 years, which can turn the flat PV panels right into kites, the electricity can be generated in considerable quantities in western USA or lower California. Provided that the solar panels must be weatherproof and the generated electricity must also be stored efficiently.
Today I became aware of a new project where the U.S. Department of Energy (DOE) has completed a $504.4 million loan guarantee for the Advanced Clean Energy Storage (ACES) project in Utah.  Hydrogen will be stored in salt caverns. I imagine with the cheap electricity, you could produce the hydrogen cheaply there or nearby and contribute massively to decarbonization.

Innovation In the Electric Power Industry - May 2022 SPECIAL ISSUE

Innovation In the Electric Power Industry: Letter from the Community Leader

From Wind-Based to Market-Based Wind Operations in the USA.

Innovation In the Power Industry 2022

Encouraging Grid Innovation with the Infrastructure Investment and Jobs Act

Desert as a solar power plant

A New Paradigm of Thinking Whitepaper