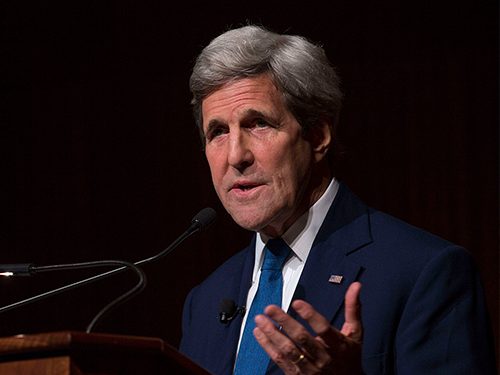 U.S. climate envoy John Kerry is receiving severe pushback for his comment in a weekend interview that half of the greenhouse gas emission reductions that must be achieved by mid-century depend on technologies that don’t yet exist.

“I’m told by scientists that 50% of the reductions we have to make (to get to near zero emissions) by 2050 or 2045 are going to come from technologies we don’t yet have,” Kerry told the BBC’s Andrew Marr Show Sunday.

“Great news! I spoke to Harry Potter and he said he will team up with Gandalf, Sherlock Holmes & The Avengers and get started right away!” #FridaysforFuture founder Greta Thunberg tweeted in response.

The BBC video of the interview won’t play outside the United Kingdom, but U.S.-based Canary Media has the full clip here, with Kerry’s comment starting around 7:00.

Marr’s 8½-minute slot with the former U.S. secretary of state “was one of the toughest but fairest interviews I’ve seen of Kerry since he became ‘climate czar’” for the Biden administration, writes U.S. climate journalist Emily Atkin. “What made it so tough was Marr’s demand for specificity about how the U.S. would go about achieving such massive reductions in such a short period of time. Rather than asking Kerry to explain, broadly, ‘how will you do it?’, Marr asked targeted, yes-or-no questions about how Biden planned to tackle some of the U.S.’s biggest climate problems, like coal and rampant consumerism.”

But it was Kerry’s apparent embrace of still-nascent technologies that drew the lion’s share of the attention.

“We have all technologies at hand for the decarbonization of the entire energy system,” wrote Sven Teske, research director at Australia’s Institute for Sustainable Futures, and lead author of a report two years ago on 1.5°C pathways. “Sure, a [future] solar-battery system or an electric vehicle will be far more efficient and most likely cheaper than today. But that does not mean that we have to wait for another 10 years of research to decarbonize the energy system. And I say that as a scientist.”

Energy storage technologies “are ready for implementation as well, and I am not just talking about batteries,” Teske told The Energy Mix in an email. “Again, the cost curves go south for all those storage technologies,” but “economies of scale can only be reached when we start implementing them. So we do not need to wait a second—we have everything at hand.”

By contrast, “it’s virtually impossible for new energy infrastructure technologies to have a significant effect on global emissions in the time we have left to act,” Julian Allwood, a University of Cambridge professor of engineering and the environment, told BBC. “Despite politicians’ wishful thinking, the most important innovation opportunities will be not about new technologies, but new businesses in areas such as remote working.”

Institution of Mechanical Engineers spokesperson Dr. Jen Baxter agreed Kerry’s time frame for scaling up new technology “seems very optimistic”, adding that carbon reductions should depend on existing technologies and new lifestyle choices, like a shift to public transit, rather than putting faith in options that are still being developed.

“Of course we will benefit from new technologies, but they are most likely to be in industries that already exist such as renewables and energy storage—rather than some widget that we can’t imagine at the moment,” he told BBC. “We also need some forms of behaviour change, like walking and cycling more and eating less meat. These policies deliver health benefits anyway.”

Former UK chief scientist Dave King applauded what BBC calls Kerry’s “techno-optimism”. He called for “regulatory measures to bring the new technologies rapidly into the marketplace, and carbon pricing on oil, gas, and coal extraction to speed up the process.”

Canary Media says Kerry’s remarks to the BBC were more nuanced than much of the reaction.

But “Kerry was not arguing for delay until new technologies materialize,” Spector adds. Immediately after his line about “technologies we don’t yet have”, he stated that “we’re going to put every effort we have into making this transition happen as fast as possible. And I’m not going to join the pessimists who think we are sitting around waiting for some new technology.”