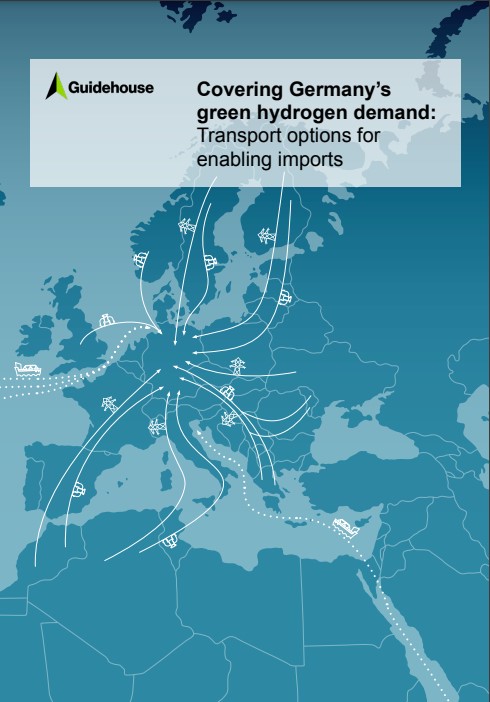 Green hydrogen will play an important role in the energy transition. In Europe, Germany is expected to become the biggest importer of green hydrogen and its derivatives, accounting for more than half of the combined hydrogen import demand across European countries. Transport of hydrogen and its derivatives will be a crucial step for meeting local demand. Hydrogen demand. Germany’s demand for hydrogen1 is expected to grow immensely in the coming years.

To reach the 2030 decarbonisation target and achieve climate neutrality by 2045, the National Hydrogen Strategy foresees hydrogen demand to be between 90 terawatt-hours (TWh) and 110 TWh per year in 2030 and reach 110 TWh-380 TWh by 2050. Other studies forecasting Germany’s future green hydrogen needs suggest demand could be two to three times as high.2 Import demand. Given the high expected demand levels and limited potential for green hydrogen production in Germany, most of the green hydrogen demand will have to be met by imports.

Countries in Europe and outside Europe will be needed as partners for covering demand. Spain, the UK, and Scandinavia have the highest production potential for green hydrogen in Europe, while the largest potential for exports is expected in Spain, and in Scandinavia. Outside of Europe, studies identify the highest hydrogen export potential in Australia, Argentina, Brazil, Canada, Chile, Morocco, Oman, Saudi Arabia, and the United Arab Emirates, among others. Green hydrogen production in Germany and in Europe will likely be focused on hydrogen.

Derivatives such as ammonia and methanol are expected to be almost exclusively imported, mainly from countries not connected via pipelines removed. Hydrogen transport. Several options exist to transport hydrogen and its derivatives to Germany. The availability and economics of hydrogen transport routes have important implications on the form and origin of hydrogen imports. • Pipelines, especially those with large diameters, offer the most economical way of transporting large volumes of hydrogen. Repurposing existing natural gas pipelines can reduce infrastructure investment cost to as low as one-third of new pipelines.

Pipeline transport is particularly well suited for inner-European transport and transport from neighbouring regions with pre-existing infrastructure, e.g. North Africa. • For import routes across long distances (3,500 km or more), maritime shipping is the preferred option. Particularly for routes where hydrogen pipelines are not possible and for hydrogen derivatives, shipping can be the only transport option. However, given that converting hydrogen into derivatives (and reconversion) is the single biggest driver of transport cost, hydrogen and its derivatives should be transported in the form required by the end use to minimise conversion losses.

While at low volumes and across short distances, importing renewable electricity to produce hydrogen in Germany can be cheaper than pipelines, over distances of 500 kilometres and above, pipelines are better suited for hydrogen imports from an economic point of view. However, electricity imports for use in the power sector will still play an important role for ensuring Germany’s energy security. Sustainability of transport. Decarbonised pipeline operation and ship fuelling will be key for assuring the green quality of hydrogen, from a full-lifecycle emissions perspective.

This requires pipeline compressors to be operated using electricity with high renewable energy shares in all transit countries. For shipping, decarbonized fuels such as green hydrogen, ammonia or methanol can greatly reduce the emission intensity of the final product delivered compared to conventional shipping fuels.

Of the available options, salt caverns are considered the most promising storage solution. Existing caverns, gas reservoirs, and aquifers could satisfy Germany’s 2030 storage needs and over 80% of the needs in 2050. However, further research into storage options, cost factors, and associated investment needs will be necessary. Domestic use. The use of hydrogen should be limited to sectors where direct electrification is difficult, i.e. in energy intensive industries, for long-distance transport (including aviation and maritime shipping), and as a flexibility and storage resource in the power sector, including in (dispatchable plants for) district heating. Regulation. Regulation will be key for a fast run-up of global hydrogen markets.

The sustainability criteria set out by the EU will determine the economics of green hydrogen projects. While clear and stringent criteria for green hydrogen are crucial to ensure sustainability, more lenient requirements could be applied for a limited transition period to allow for a faster market development.

For hydrogen grid infrastructure, which is considered a natural monopoly that should be fully regulated in the long run, a two-staged approach starting with a more flexible regulatory framework in the beginning should be considered to ensure timely build-up of the grid.