The UN has bestowed the title of "UN Champion of the Earth" to Costa Rica because of its prodigious utilization of hydroelectric, solar, and wind for energy production. However, these technologies all have large land area requirements. At current relatively low per capita energy footprints (about 10% lower than China's), the country's energy mix requires about 6.3% of its land area resulting in displacement of indigenous people and other problems. If the country's energy footprint were that of the US and uses the same energy mix, Costa Rica would have to commit over 26% of its land area for energy supply. Using renewable sources is important, but not acknowledging the aggregate sustainability metrics in specific situations is misleading. Disconcertingly, the UN appears obsessed with virtue signaling in not conveying a balanced and realistic sustainability perspective for this situation.

The visceral gaze of the iconic author, John Milton, who penned the epic poem, Paradise Lost, appropriately connotes a disquieting concern with the United Nations. Milton's poem is the biblical story of the Fall of Man including the temptation of Adam and Eve by the fallen angel, Satan, and their expulsion from the Garden of Eden. Who would have imagined that the UN would be so desperate to push a renewables agenda that they blithely proclaim Costa Rica as a green energy paradise, a sustainable role model, and a "UN Champion of the Earth." There is no question that renewables are vital for emissions control and, more importantly, for the economy as fossil fuel prices will rise with increased demand. However, as often is the case, the "devil is in the details" as discussed below along with the UN's palpable duplicity.

The UN avowed that the nation of Costa Rica was a "UN Champion of the Earth" implying that it is a model green paradise. Meanwhile, the UN is also a concomitant proponent of sustainable land use which is "the use of land resources, including soils, water, animals and plants, for the production of goods to meet changing human needs, while simultaneously ensuring the long-term productive potential of these resources and the maintenance of their environmental functions."

The Borgen Project boasts that Costa Rica generates 98% of its energy from renewable sources. Unfortunately, more than 67% of that "renewable" energy is generated using hydroelectric sources.

Although the preponderance of Costa Rica's other energy sources are considered authentic renewable energy sources, hydroelectric, which is classified as renewable, is notorious for its abysmal sustainable land use characteristics.

Consequently, the anointed "Champion of the Earth" is curious as Costa Rica's energy land use blatantly conflicts with the UN's mandate on sustainable land use.

Arguably, the UN is so myopically focused on pontificating "renewable energy" success stories that it conveniently overlooks other mandates in its sustainability charter such as sustainable land use.

One of the author's colleagues often articulated an, eloquent, but compellingly blunt, polemic when ruminating about sustainability project strategies and technologies.

I believe in God, but everyone else has to bring data.

Many of us want to see a renewables economy. However, renewable systems have to pass muster and scrutiny the same as their fossil fuel brethren. One must judiciously balance advocacy for a renewable technology particularly if there are thorny features that have glaringly unsustainable consequences such as poor sustainable land use characteristics.

The UN's proclamation of Costa Rica as a green energy paradise is misguided at best but, at worst, it is misleading and dangerously confusing from a sustainability perspective. Consider the figure below. The raw data for Costa Rica energy production were gathered from other sources. This information is used to calculate the impact of Costa Rica's energy portfolio for different energy footprints (energy per capita per day usage).

It is noteworthy that the UN green paradise proclamation for Costa Rica is based on a low, but livable, energy per capita footprint. 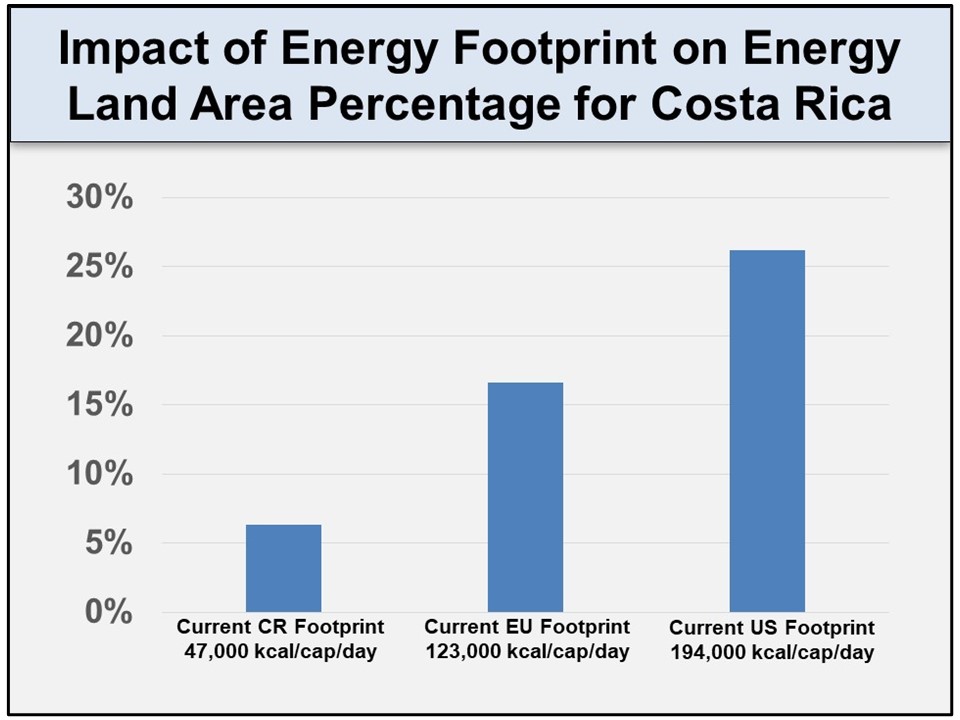 For the current footprint (47,000 kcal/cap/day), 6.3% of the country's land area may not seem like much except for those citizens that are inconvenienced. However, even at this relatively small energy footprint, hydroelectric power's egregious land area requirements manage to infringe on critical wildlife areas. If the same energy mix is used to generate sufficient energy to meet higher energy footprints, the implications are even more draconian.

If Costa Rica aspires to have the energy footprint of the United States using the same energy portfolio, it would have to commit a staggering 26% of its entire land area for energy production.

The results of the analyses presented herein are not really much of a surprise. The tendency of some renewable energy platforms such as solar and wind in addition to hydroelectric power to have challenges with sustainable land use is well-documented. Additionally, it is interesting to note that China will have similar energy land use challenges as Costa Rica if it desires to have the same energy portfolio with its transition to a middle class economy. Consequently, it behooves strategists to be mindful of the dual challenges of energy production and sustainable land management. Other renewable platforms such as anaerobic digestion for RNG production warrant consideration in order to meet the dual objectives of renewable energy production and judicious and sustainable land use management.

Authentic Sustainability is Not Virtue Signaling

In summary, virtue signaling can not be the governing design criteria for developing and engineering systems for renewables projects. Renewable technologies need to be held accountable for ALL their sustainability characteristics as part of the overall sustainability calculus.

Thanks Alan - these are points that can't be made often enough.

"Disconcertingly, the UN appears obsessed with virtue signaling in not conveying a balanced and realistic sustainability perspective for this situation."

The UN, and California, and New York, Massachusetts, and other U.S. states claiming virtue for additions of renewables, while denying shame for its obscene land-use requirements; claiming virtue for reliance on intermittent, unpredictable clean energy, while denying shame for the fossil fuel consumption on which they all remain hopelessly dependent.

It's out of control.

Thanks, Bob. What is particularly startling is that there are alternatives that are ignored.

I believe in God, but everyone else has to bring data.

This made me smile-- and indeed, data is king!

Alan , Thanks for bring up this area of concern. I am sure you and many readers like me know that Solar doesn't take up any land. They can and are placed on roof tops and over parking lots. Then they provide Solar PV electric energy AND Solar passive shade. Both are priceless as they use no water and make no pollution.

Wind also doesn't take any land use. In FACT many farmers have wind towers right in their fields and they take almost no room or land area. Of course they also don't use or pollute any water like other power.

Then we come to hydro. That can take some land area. In the desert of Arizona at SRP salt River Power non regulated Government Utility that use 7 large dams to prevent floods. Yet they also provide almost 10% of the power needed by their 1 million or more customers. It creates electric power 24 /7 and as they finally improve it after 50 years it could provide twice that amount of power with no land increased use.

So if you add the FACTS of this power land use is not as issue. Displaced people is seldom a part of the plan. The benefits far out weight the small issues that can be dealt with if they are planned right.

1. Rooftop solar is a different situation and although "many readers" like yourself also feel that solar and wind sustainable land usage can be problematic, particularly with massive, centralized installations.

2. You are right about "solar shade" being priceless. It is worth nothing. Why would anyone willfully create shaded areas that prevent normal functionality of ecosystems and then call that "priceless"? In contrast, solar on roofs and other obstructive sun-blocking constructs of human functionality is an elegant means of deploying solar.

4. The SRP or Salt River Project that you reference as a bellwether standard for hydroelectric was first started in 1903. That era was completely different from the 21st century and bereft of many of the environmental and sustainability standards that are routinely applied now. It can be argued that in today's world, such a massive project that is so potentially disruptive to indigenous ecosystems  would not get passed the EIS stage.