This month marks the 140th year of operation for the country’s largest steam system and its next metamorphosis to a clean energy future. This transformation will provide a cost-effective clean energy solution for hard-to-electrify Manhattan buildings seeking to comply with city and state emissions goals. 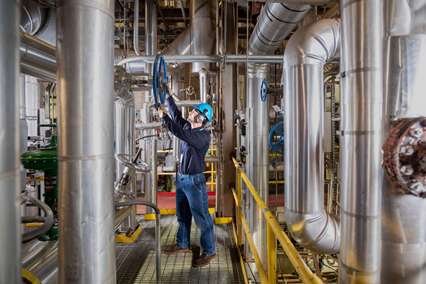 Some of New York’s most iconic institutions, including Grand Central Terminal, the Empire State Building and the United Nations, rely on steam for heating, cooling, and hot water. Hospitals use steam to sterilize equipment.

“We are re-imagining the steam system that has served New Yorkers reliably since 1882,” said Frank A. Cuomo, Con Edison’s general manager of Steam Services. “That means accelerating the adoption of energy efficiency, and supporting research and development of new technologies needed to achieve net-zero GHG emissions by 2050.”

Clean steam can help customers avoid costly, deep retrofits to their buildings and significant tenant disruption. Steam also frees up valuable space that would otherwise be filled with equipment for heating, hot water, air conditioning, and in some cases humidification and sterilization.

In addition to current steam customers, approximately 6,000 large buildings operating on oil or gas near steam mains could benefit from this transition. Of these buildings, more than 1,000 would have a net-zero cost connection.

First of Its Kind Transition

Decarbonization solutions for the steam system are at different levels of maturity and scale and some are currently cost-prohibitive. The company’s recently published Long- Range Plan for steam identified representative pathways to capture a range of potential solutions including:

Pumping up to 8.5 million pounds of pure steam an hour, the steam system, long considered one of the cleanest energy sources, serves more than 1,500 customers from the southern tip of Manhattan to 96th St and the 3 million people who work, live, and visit.

The steam system has a long history of supporting significant reductions in system-wide emissions through co-generation, converting to lower emitting energy sources, and efficiency upgrades to generation and distribution.

About 60 percent of the steam comes from steam-electric cogeneration. Cogeneration makes steam using the heat produced as a byproduct from electric power-generating facilities. That heat would otherwise be wasted. The steam system brings economic, environmental, and operational benefits to building owners and operators.

To learn more about the transition of the steam system, listen to a Current Thought Podcast here.

Brookfield Properties is proud to have worked with Con Edison to establish its district steam system across our Manhattan West development and we are encouraged by Con Edison’s commitment to decarbonize its generation process. We look forward to partnering with stakeholders across the private and public sectors to achieve a clean energy future for New York.

Con Edison’s distributed steam system is essential to New York City's livelihood. We hope that excess combustible gases from waste and wastewater treatment, which to date have been flared, wasting their energy potential, will be part of a comprehensive solution that incorporates various forms of renewable energy sources for district steam.

James Whelan, President of the Real Estate Board of New York

District steam is a critical energy source for New York City’s buildings, which is why REBNY commends Con Edison for taking steps to strengthen and decarbonize this important district system. Like all New Yorkers, building owners must have reliable, cost-effective, carbon free power and we look forward to continuing to work with Con Edison to make that a reality.

Urban Green looks forward to working with Con Edison and all stakeholders to evaluate decarbonization solutions to NYC’s steam system. This is an essential step to move more than 1200 large buildings to a clean energy future.

Vornado has long been a supporter of Con Edison’s district steam for its reliability as both a heating and cooling resource, and for the much-needed relief that it provides the electric grid during times of peak usage. Hearing that Con Edison steam has made a commitment to decarbonize its generation process is extremely encouraging, as it allows longtime steam customers to achieve our own Net Zero goals while continuing to utilize existing infrastructure without costly and disruptive retrofits.