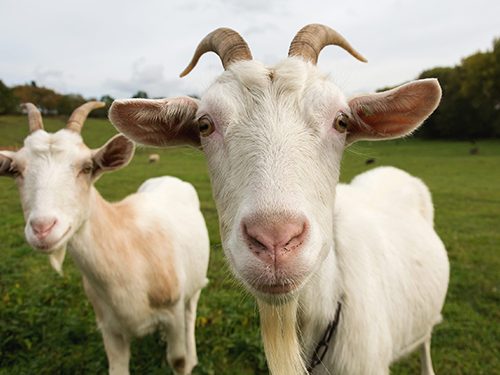 A herd of celebrity goats has been entertaining Zoom audiences for a small fee and helping the owners of Cronkshaw Fold Farm in Lancashire, England convert their operation to run on renewable energy.

The farm “has been offering up their goats to make spontaneous, up-close appearances in virtual meetings anywhere in the world,” the Washington Post reports. At a cost of about US$6 (€5) per visit, “the goats drop in on otherwise mundane virtual gatherings, including seemingly serious business meetings, birthday parties, baby showers, and high school math lessons. Out of nowhere, a goat will appear in the meeting with its name displayed on the screen.”

“It started as a joke. It wasn’t actually supposed to be a thing,” said Cronkshaw Fold owner Dot McCarthy. But after she posted the idea online, she woke up to 200 queries the next morning.

At first, “it was just to give people a laugh, and I thought, maybe we’ll get a few more egg and meat sales because people are on the website,” she told the Post. “But what actually happened was people were like, ‘Yes, I need a goat.’”

The news story quotes the online capsule biographies McCarthy has posted for seven of the 40 goats, each of them with their own very distinct personality quirks.

“While the main idea is to get some laughs during a grim time, the goat video calls have managed to keep the 500-year-old farm afloat,” the Post notes. Cronkshaw has facilitated more than 10,000 five-minute video calls in the last 11 months.

“Since April, the spontaneous service has brought in around $60,000, allowing McCarthy to continue paying her staff members. Plus, additional funds go toward her long-term goal of converting the farm to renewable power.”

MIT professor Harriet Rivko said she wasn’t surprised by the goats’ newfound celebrity. “Goats are very charming animals,” she told the Post. They’re intelligent and interactive, as long as they’re not eating something that you don’t want them to eat.”

McCarthy’s own messaging seems to acknowledge that she’s responding to a unique moment of herd mentality. “We know this is bonkers,” the Cronkshaw Fold website says, but “it’s 2021. Just Goat with the flow.”