Robin Duquette is CEO of Pyxidr, a firm dedicated to capturing value with data, analytics, and information technology through commercial optimization principles.Our current initiative is to put...

Solar and wind have become the de-facto technologies for attaining 100 percent clean-power targets. But their intermittency is such that we have to store energy for many hours if we rely only on these resources to cover 100 percent of the load. Ensuring solar and wind resources' adequacy with batteries is much more expensive than using some dispatchable low carbon resources like a natural gas combined-cycle retrofitted with carbon capture ("NG4C").

We have found that NG4C is more cost-effective than long-duration batteries for delivering 100 percent clean-power in California and Texas. It is also the case when assuming a modest investment cost of $60/kWh for battery storage and providing only 75 percent clean-power (we purchase the remaining 25 percent in the wholesale market).

This article shows that using a mix of solar, wind, NG4C, and short-duration batteries in California and Texas can deliver 100 percent clean-power at a reasonable cost compared to current wholesale price levels.

What does it mean to commit to 100 (or less) percent clean-power?

Committing to 100 (or less) percent clean-power is to meet the load (i.e., consumption) with 100 (or less) percent energy produced from low carbon resources. For example, the exhibit below shows that we are meeting 95 percent of the load over 24 hours with a combination of solar, wind, NG4C, and a battery discharging previously produced solar, wind, or NG4C energy. We meet the remaining 5% with purchases in the wholesale market. 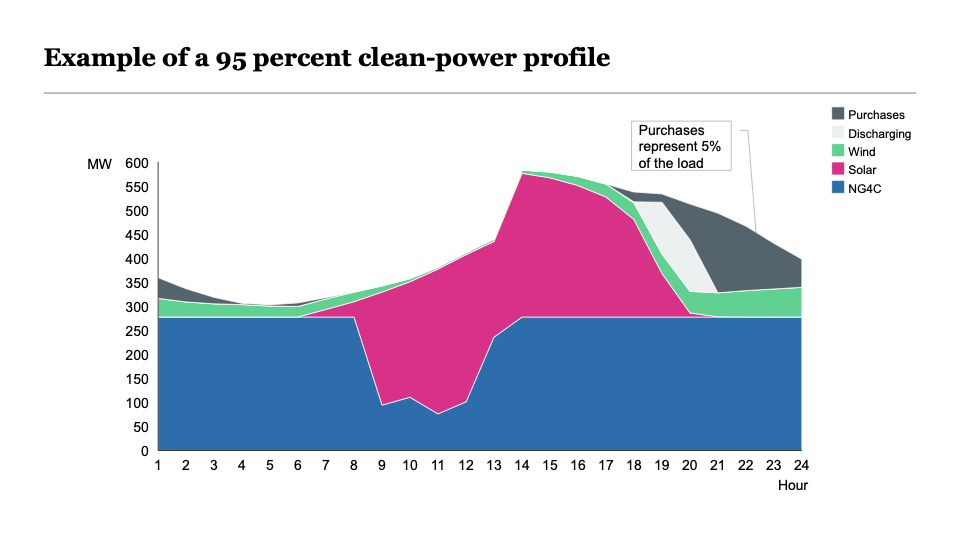 As we can infer, this definition is more stringent than compensating consumption with renewable energy without taking into account its profile. But the latter does not correspond to what system operators have to manage.

With this definition of 100 (or less) percent clean-power, an issue is the need to trace clean energy to make sure we produce it at the right time and location and coordinate the various resources to meet the load at minimum cost. We have an initiative that we call Flex Bank, aimed at providing a solution to this problem.

Why is 100 percent clean-power relevant today?

As several states in the United States and European countries have announced goals to achieve 100 percent clean-power in the next 10 to 30 years, more and more organizations are setting themselves ambitious short-term goals to switch to clean energy. Even though most organizations do not aim for 100 percent, an increasing share seeks to increase the percentage of clean energy in their consumption to 50 percent or more over time. These organizations want this because of customer preference for products or services with a positive impact on the environment, investors demanding greater responsibility on climate change, or employees valuing strong corporate environmental values.

Additionally, we would say that the sooner we provide a market for 100 percent clean-power, better incentives will be in place to deal with the intermittency and congestion associated with solar and wind projects. For instance, NG4C cannot compete against solar or wind for producing energy, but its dispatch characteristics make it an economical solution for modulating clean energy in some locations.

Why California and Texas?

California ("CAISO") and Texas ("ERCOT") both have a significant share of their installed capacity coming from solar and wind power, with still good potential to increase this renewable capacity in the future. Besides, the coasts of southern California (e.g., Los Angeles) and Texas (e.g., Houston) have gas-fired power plants, high emitter density, industries using CO2, and salt formations nearby, which all help to cut costs dramatically for Carbon Capture, Use and Storage ("CCUS"). 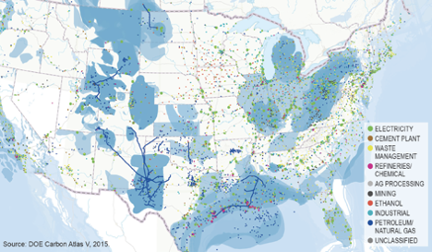 How valuable is carbon capture for achieving 100 percent clean-power?

We provide a brief description of our approach and cost assumptions in the next two sections. For now, be aware that we have used reasonable assumptions for carbon capture and a cost of $100/kWh for battery storage.

We have carried out our analysis between October 2019 and September 2020 because CAISO and especially ERCOT experienced fewer price spikes and, therefore, more suited to our study. In the presence of price spikes, any generating capacity is very profitable. We did not want our observations to be influenced by these spikes because they are not directly related to clean energy procurement.

In the most straightforward and broadest terms, retrofitting a natural gas combined-cycle ("NGCC") with carbon capture is just much cheaper than relying solely on solar, wind, and batteries for achieving 100 percent clean-power in CAISO and ERCOT. This exhibit presents the average cost related to various scenarios of clean-power. 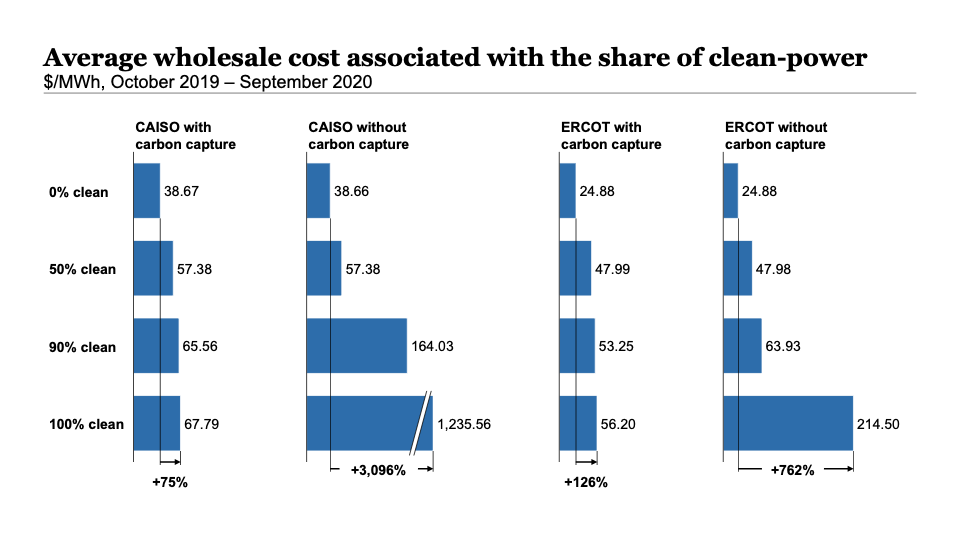 The zero-percent clean-power scenario represents the average cost to meet the load with market purchases in the day-ahead market. We observe using current power price levels to cost a premium of about $30/MWh to provide 100 percent clean-power when introducing an NGCC retrofitted with carbon capture in the mix. We can also adequately hedge the associated cost as its variability mainly depends on natural gas prices, and NG4C will often be on the safe side of the congestions.

The implied costs for captured CO2 are $92.1/tonne and $81.5/tonne for CAISO and ERCOT, i.e., well above the current price of California Carbon Allowance. Therefore, we are not yet retrofitting an NGCC with carbon capture for the sole purpose of abating CO2.

The following two exhibits present the installed capacity and the energy produced associated with each resource to provide 100 percent clean-power. If we rely exclusively on solar, wind, and batteries, we have to size the storage to move a large amount of energy, which is quite expensive. 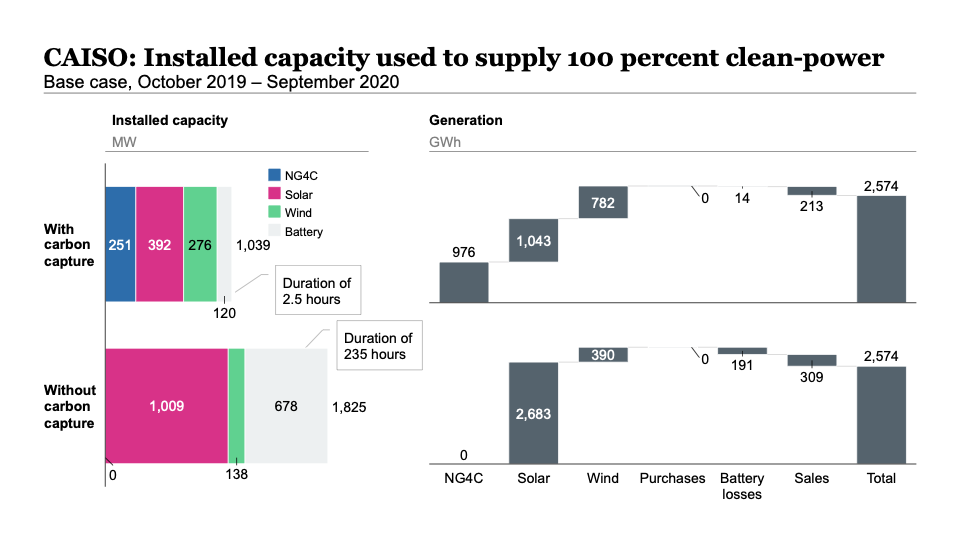 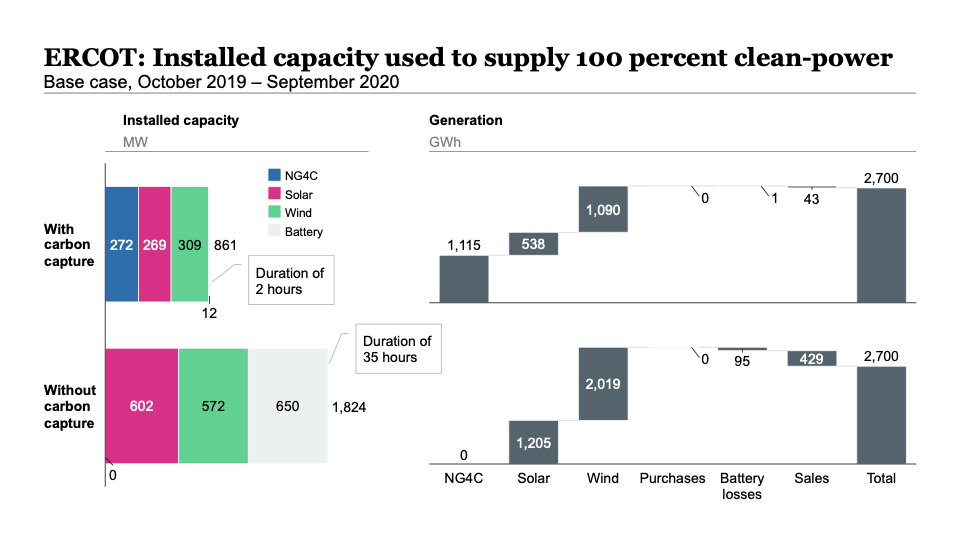 NG4C starts to be valuable relative to a battery when we require 70 (or more) percent of clean-power. If we assume a very cheap cost of $60/kWh for battery storage, NG4C is still valuable for about the same percentage. The next exhibit depicts the marginal value associated with NG4C under different shares of clean-power and battery storage costs. 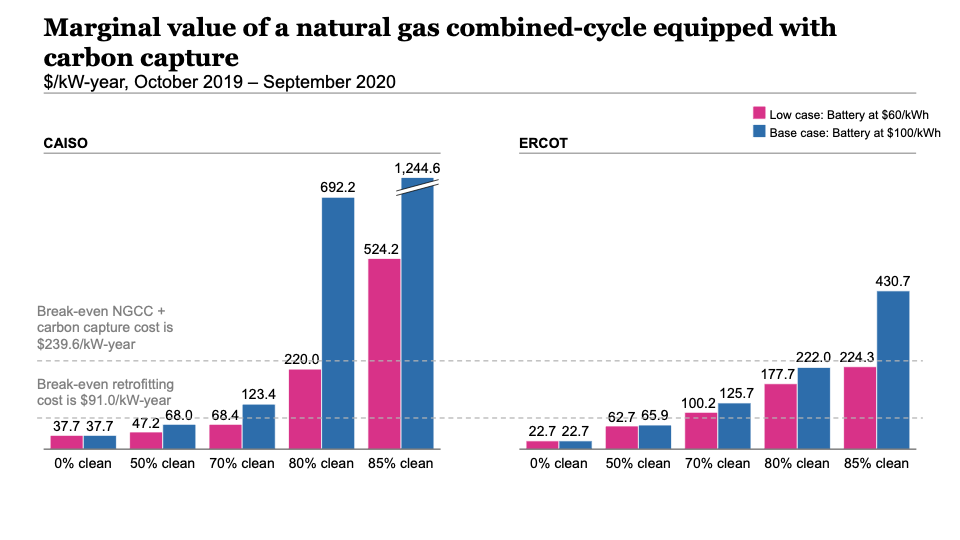 Consequently, NG4C is quite robust to future battery costs, and the carbon capture technology will undoubtedly get cheaper in the future.

We have developed a proprietary tool (which is part of an advanced analytics toolkit associated with our Flex Bank initiative) that determines the combination of solar, wind, thermal plant equipped with carbon capture, storage, and market purchases that minimizes the total cost of meeting an assumed load profile with a given percentage of clean-power. We allow market sales to mitigate the energy intermittency further, but we cap them to 20 percent of the total load.

The following exhibit shows the solar, wind, and load related profile for CAISO and ERCOT used in our analysis. 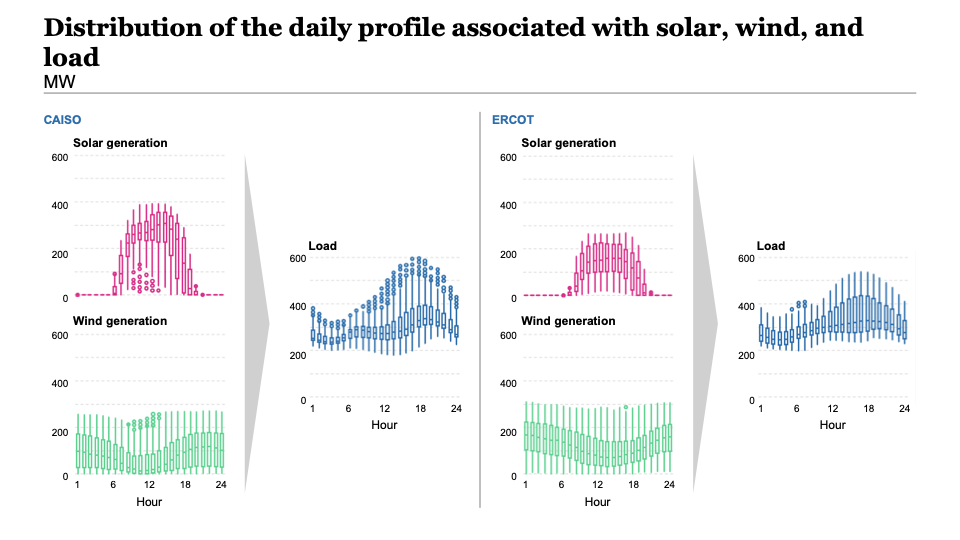 We have employed the load profiles associated with CAISO and ERCOT, such as the 99th percentile is 500 MW, to define the profiles used for our analysis. It is roughly comparable to an aggregator delivering clean-power to its customers.

The solar and wind production profiles for CAISO are those associated with the SP15 hub. And for ERCOT, these are the profiles respectively linked to the system and the West hub.

The following table summarizes our cost assumptions used in our analysis. 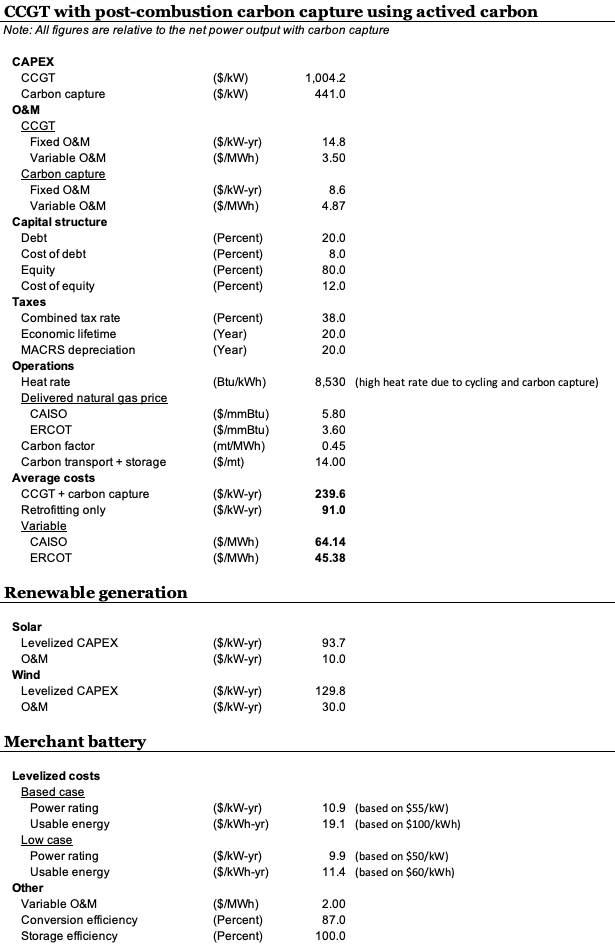 With this announcement the list of TX coal closures continues to grow.  Currently there is still about 17.4 GW of coal capacity left in TX and half of this capacity now has an announced closure date.What would it take to shutdown all of..