This follows the Coastal Commission’s unanimous approval on 7 April 2022 to proceed with offshore wind at the state’s other WEA at Humboldt, off California’s north coast.

The Bureau of Ocean Energy Management (BOEM) published its Proposed Sale Notice (PSN) on May 31, 2022, for what would be the first ever offshore wind energy leases on the west coast of the United States. The sale would span 373,268 total acres across five different proposed leases, three within the Morro Bay Wind Energy Area (WEA) off the central California coast and two within the Humboldt WEA to the north. If developed, these areas could result in at least 4.5 gigawatts of new wind energy capacity—enough to power more than 1.5 million homes.

BOEM would allow a bidder to bid for and ultimately acquire one lease in each of the two regions. BOEM proposes to utilize a multiple-factor auction that will credit bidders for financial commitments to an offshore wind workforce training program or to the development of the domestic supply chain. Another proposed credit would favor developer commitments to a community benefit agreement with a community or stakeholder group whose use of the lease area would be directly affected by the proposed offshore wind development. 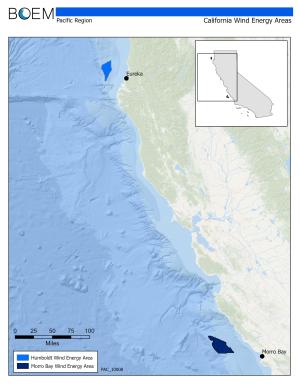