With some eyewatering figures being mentioned Brazil is showing signs of being ready for what Walt Rostow termed economic' take off' and in advance of any roadmap or framework the political dimension was announced in January and with a substantial 5GW scheme announced for the south this week.

The President of the Republic, Jair Bolsonaro, issued a Decree that provides for the transfer of the use of physical spaces and the use of natural resources in internal waters of the Union’s domain, in the territorial sea, in the exclusive economic zone and on the continent. platform, for the generation of electricity from an offshore company.

The Decree aims to fill the gap identified by public institutions, businessmen, specialists and organizations of a regulatory framework for the exploitation of marine electrical potential in Brazil – especially related to issues on the implementation and the concession model – constituting an important advance in the development of the wind source in Brazil. The proposal was the subject of numerous meetings and discussions between the Ministry of Mines and Energy and other actors during 2021, including Ministries with issues involved, the Brazilian Institute of Environment and Renewable Natural Resources (IBAMA) and national and international organizations.

Such regulation is also desirable and compatible with the transformations that the Brazilian Electricity Sector has been experiencing in recent years, especially due to the evolution of the electric matrix, accompanying the modernization of electric power generation technologies from renewable sources and with great power capacity, characteristics that are important to meet the growth in demand in the coming years.

The Decree defines how the procedures must be carried out, where the assignment requests can be submitted and what steps the entrepreneur must follow to carry out the undertaking.

Once the transfer of use has been obtained, it will be the contractual obligation of the entrepreneur to carry out the necessary studies to identify the offshore energy potential, and must comply with the criteria and deadlines defined in a specific act of the Ministry of Mines and Energy 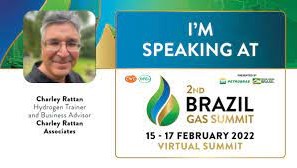 As with the UK the value chain is of critical national importance and I shared thoughts as to how offshore wind and it's new bedmate, hydrogen could fit into the wider picture

As the ministerial decree states, Brazil, in particular, has favorable characteristics for the installation and operation of enterprises for the generation of electrical energy in the sea. As well as 7,367 km of coastline and 3.5 thousand km² of maritime space under its jurisdiction, the country has an extensive continental shelf that gives it shallow waters along its coastline, benefiting from the incidence of two trade winds, present in the northeastern region of the country, of constant intensity and direction, one of the best characteristics for the viability of offshore wind farms.

I'm doing my bit and re-engaging with financiers and key stakeholders in the coming days. Feel free to join the community of the willing Hydrogen for Brazil