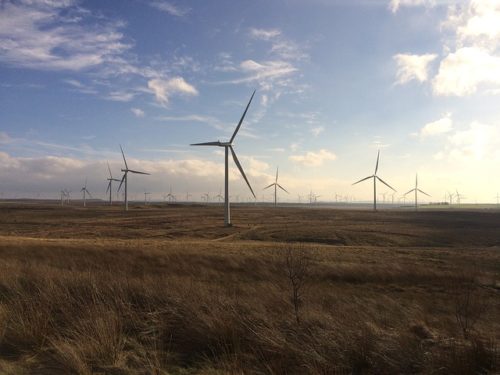 U.S. President Joe Biden’s recent pledge to protect 30% of America’s lands and waters by 2030 need not clash with its earlier promise to reduce emissions by expanding the country’s wind and solar farms—as long as those implementing renewable energy policy do so with an eagle eye on sustainability.

“Biden wants to balance infrastructure and conservation goals. But it won’t be easy,” writes Grist, noting that newly-minted first draft of the president’s “America the Beautiful” initiative “included few details about how the administration will achieve the so-called ‘30×30’ goal while also juggling its other key environmental priority: a massive expansion of solar and wind power.”

What the 22-page report does contain is a broad-strokes road map for conserving and restoring the land and waterways of the United States over the next 10 years while creating jobs, fighting the climate crisis, and resolving unequal access to the natural world. Grist says the report also sets “eight principles for steering the implementation of the 30×30 goal, including supporting tribal nations’ priorities, using science as a guide, and encouraging voluntary stewardship on private property.”

Despite loud claims to the contrary, Biden’s conservation plan isn’t a “land grab” of private property, Grist adds. It could, however, deal an entirely unintended blow to the president’s ambitious emissions reductions target.

Citing Princeton University’s recent Net Zero America study, Grist reports that, “by 2050, wind and solar projects are estimated to sit on roughly 596,000 square kilometres of country,” adding that that’s “a swath of land larger than Arizona and Colorado combined.”

But emissions cuts and conservation efforts are by no means mutually exclusive. Cornell University renewable energy ecology expert Steven Grodsky described measures that could advance the first without imperilling the second, like solar panels in landfills and on top of buildings, as well as measures that could advance both sets of goals together, like solar farms that double as pollinator habitats).

[Some observers also say the Princeton study may have underestimated the potential to boost energy efficiency across the U.S. economy. If that’s right, the country may be able to hit the administration’s renewable energy targets without quite covering a land mass the size of Arizona and Colorado—Ed.]

Grodsky called for a renewed research effort “to understand how renewable projects can be sited and built in a conservation-minded way”—and after that, he added, renewable energy developers will have to pay attention to the researchers’ conclusions.

“If you go in with a strategy that’s informed by the most up-to-date science and implement those strategies, then you’re less likely to have unintended consequences,” he told Grist.

The US generates about 2,400 TWh per year from fossil fuels. Modern solar farms in the south and west provide about 600 GWh per square mile, Modern wind turbines generate about 15 GWh each and take up about 0.05 acres each. So if the fossil fuel electricity was replaced by 35% rooftop solar, (easily done according to NREL studies), 25% utility scale solar, 30% onshore wind and 10% offshore wind then you would need about 1,000 square miles of solar farms (less than a third of the area used by golf courses) and the equivalent of 100,000 onshore wind turbines. The land actually occupied by turbines and access tracks will be only about 10 square miles, the rest will remain as farms, deserts, commercial forests etc. One single coal mine in the US covers 68 square miles and produces only about 12% of US coal.