The increasing share of wind and solar photovoltaic (PV) electricity in power systems requires efficient management – and, in some occasions, the reinforcement of transmission and distribution networks – to prevent congestion. As an alternative to expensive upgrades to the infrastructure needed for the grid-integration of variable renewable energy sources, like solar and wind, non-wire alternatives, also called virtual power lines (VPL) are being rolled out in several parts of the world.

To support the existing network, while enhancing the performance and reliability of the power system, VPLs include batteries connected at least at two locations in the grid: one battery at the supply-side, close to the renewable generation source, which stores surplus electricity production that cannot be transmitted to the demand side due to grid congestions (and which would otherwise be curtailed); and another battery placed at the demand area, which would be charged whenever transmission capacity is available, and demand is low. 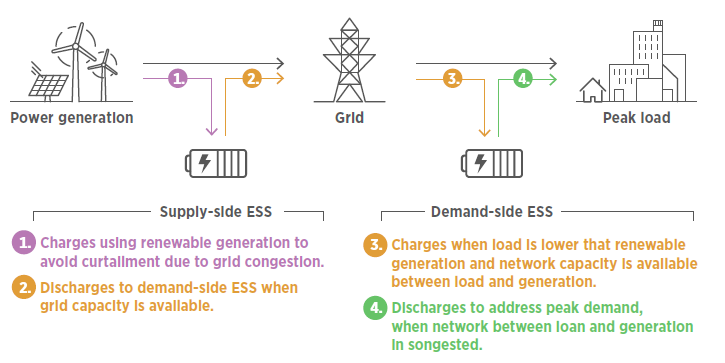 Seen differently, virtual power lines are one specific application of energy storage systems (ESS). Used as virtual power lines, utility-scale batteries (IRENA, 2020b) provide several potential benefits, such as adding electricity capacity to the grid much faster and, in some cases, at a lower costs comparing to conventional infrastructure reinforcement or expansion (see Table 1). In addition to congestion management, virtual power lines are also well-suited to providing a range of ancillary services (IRENA, 2020c). Batteries can provide fast frequency response, which could replace peaking gas power plants. They can also offer system inertia, traditionally provided by coal-fired plants, for which synchronous condensers have become the main requirement, and flexible ramping. However, the regulatory framework dictates whether batteries used as virtual power lines can also participate in the wholesale and ancillary service markets, where such markets exist.

To unlock innovative business models that make virtual power lines more economically attractive, energy storage systems should be permitted to provide a range of services including storage to reduce congestion, which would help to defer network investment, as well as ancillary and balancing services, such as frequency and voltage regulation. From a cost-effectiveness point of view, the optimal use of the battery itself should also consider the number of charges and discharges per day and the life span of the battery to provide such services. Allowing the stacking of multiple revenues is key to improving the business case for storage and maximising its social welfare.

Virtual power lines are starting to attract interest in several countries. There are already close to 3 gigawatts (GW) of batteries planned to be used as VPLs in different geographies, with projects ranging from a few megawatts (MW) to GWs. For example, the French Transmission System Operator (TSO), RTE, is implementing its first 40 MW pilot project named RINGO, with the goal of increasing grid integration of renewable energy and optimising electricity currents on its network. A German grid development plan produced by all four TSOs in the country, has proposed 1.3 GW of energy storage to ensure grid stability and lower network costs. In January 2019, the Andhra Pradesh Transmission Company, a publicly owned utility in India, proposed between 250 MW and 500 MW of energy storage to add capacity to its transmission network with an innovative cost recovery mechanism that includes allocating costs between renewable developers and distribution companies that have an obligation to serve load.

In the United States, Pacific Gas & Electric selected a 10 MW energy storage project as part of a portfolio of transmission solutions during its regional transmission planning process, the first such project chosen to provide congestion relief in US markets. In addition, in 2018 the PJM Interconnection market in the United States received proposals for multiple battery-based storage projects between 25-50 MW to help relieve network congestion issues. Similarly, in Australia, projects using battery-based storage as virtual transmission are being considered alongside traditional poles and wires to add capacity on key interstate transmission lines.

Table 2: Progress made so far by virtual power lines

Virtual power lines show that, if innovation in technology is accompanied by innovation in regulation, business models and system operation, energy storage systems can be deployed at scale and in a cost-effective manner to support the integration of very high shares of solar PV and wind energy in global power systems. IRENA’s report “Innovation Landscape for a renewable powered future” identifies 30 key innovations that can reduce the cost of integrating large shares of renewables in today’s power systems, with virtual power lines and utility-scale batteries being among them (IRENA, 2019).

Virtual power lines are starting to attract interest in several countries. There are already close to 3 gigawatts (GW) of batteries planned to be used as VPLs in different geographies, with projects ranging from a few megawatts (MW) to GWs

Are you seeing any trends or similarities in the regions / operators that are looking to adopt this strategy? What seems to be the uniting factor that makes them perhaps more open to such an innovative idea?

Virutal power lines are one possibility but to that I would also add the solutions from companies like Smart Wires. The bottom line is we can get much more out of exisiting and especially transmission lines which have low capacity utilisation factors...

This is interesting. A quick question though, is the placement only useful or could this be done at strategic points along the grid? if so, what criteria could be used to determine the battery placement points on the grid?

Good question. Thank you! Yes, the placement will be key, and for the innovation to apply effectively, the lines that are congested need to be indetified. VPLs include energy stoarage systems connected in at least two locations of the congested line: the first is on the supply side, close to the renewable generation source, which stores surplus electricity production that cannot be transmitted due to grid congestion. Such storage averts the need for curtailment. The other is placed on the demand-side and can be charged whenever transmission capacity is available. In this second case, the energy storage system is used to meet demand during periods when there is insufficient transmission capacity, using batteries charged during previous periods of low demand and free transmission capacity. More information available in this Innovation Brief: https://www.irena.org/-/media/Files/IRENA/Agency/Publication/2020/Jul/IR...