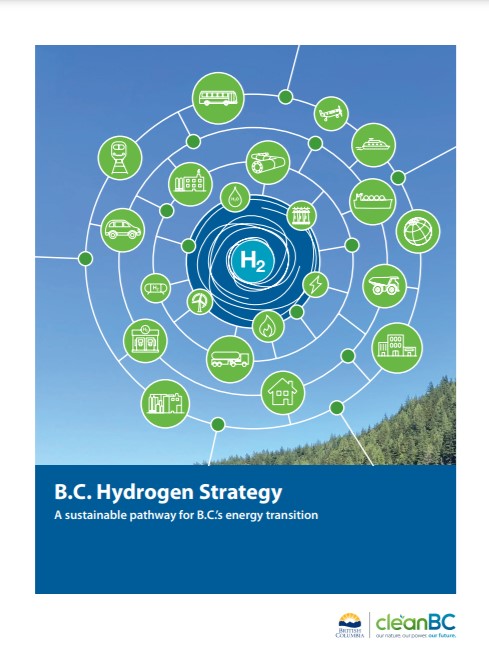 British Columbia is committed to achieve net-zero emissions by 2050. It is an ambitious target given that two-thirds of the energy we use for transportation, buildings and industry currently comes from fossil fuels. Meeting our CleanBC goals requires a determined effort to increase energy efficiency, electrify the economy and switch to low-carbon fuels such as biofuels and hydrogen.

When burned or used in a fuel cell, hydrogen produces no carbon emissions. Large-scale deployment of renewable and low-carbon hydrogen will play an essential role in reducing B.C.’s emissions. Independent estimates suggest that hydrogen has the potential to reduce annual emissions by 7.2 megatonnes by 2050 – equivalent to 11% of the province’s 2018 emissions.1

Because of its versatility, hydrogen is one of the only solutions for decarbonizing sectors of the economy where direct electrification is not practical, such as heavy-duty transportation and industrial heat. Hydrogen can be used in fuel cells to produce energy for transportation and stationary power systems, especially important for industrial sites and remote communities powered by diesel. When blended into the natural gas grid, hydrogen can displace fossil fuels to heat and power our homes and buildings.

Hydrogen can also be used for producing low-carbon synthetic fuels to reduce emissions in transportation and industry. Realizing the potential of hydrogen requires government, industry and researchers to work together. As part of CleanBC, the B.C. Hydrogen Strategy outlines the Province’s plan to accelerate the production and use of renewable and low-carbon hydrogen and be a world leader in the growing hydrogen economy. Executive summary

The strategy includes 63 actions to undertake over the short term (2020-2025), medium term (2025-2030) and long term (2030-beyond). These include: • incentivizing the production of renewable and low-carbon hydrogen; • developing regional hydrogen hubs where production and demand are co-located; • financial supports for deploying fuel cell electric vehicles and infrastructure; • expanding the use of hydrogen across different industrial sectors and applications; • promoting the adoption of hydrogen in areas where it is most cost-effective in terms of emission reductions; • creating the B.C. Centre for Innovation and Clean Energy to drive the commercialization of new hydrogen technology; and • establishing ambitious carbon-intensity targets and a regulatory framework for carbon capture and storage.

B.C. has already implemented robust policies to encourage hydrogen use in the transportation sector. B.C.’s carbon tax and low carbon fuel standard (LCFS) are reducing emissions while incentivizing the switch to renewable and low-carbon fuels. CleanBC committed to increasing the stringency of the LCFS by doubling the required reduction in carbon intensity of transportation fuels to 20% by 2030. Introduced in 2019, the Zero-Emission Vehicles Act requires automakers to meet an escalating annual percentage of new light-duty zero-emission vehicle sales, including hydrogen fuel cell electric vehicles. Hydrogen is expected to play a larger role for mediumand heavy-duty vehicles by supporting larger payloads and range.

Occasionally I come across a document that is overwhelming in scope and information-content. This requires me to adjust how I post papers based on this document if it falls within the scope of subjects that I normally write about and contains..

Study after study finds that

Mitigating climate change is important, really important, and the sooner, the better. The first major step in this process is converting our electricity to 100% greenhouse gas (GHG) free generation. This is because all other major producers of..

John commented on ...
The Golden State’s Future – Welcome to Lithium Valley
I came across a minor additional piece of information on this lithium recovery project.

Michael commented on ...
Humanity Vs. the Second Law of Thermodynamics
Thermodynamics is a relatively complicated subject for the average individual. I think a more practical thermodynamics understanding lies with:

Matt commented on ...
USEA Virtual Press Briefing: Electric Utilities and The 2050 Dilemma
It was an honor to participate in a small way to hear from these great industry leaders.

Audra commented on ...
Humanity Vs. the Second Law of Thermodynamics
Schalk - as always, great and insightful article.  I am with Matt some of this should be taught in K-12 schools.   I highly recommend all of our...
Energy Central Jobs
Featured Jobs
More Jobs