Australia – A Hydrogen Powerhouse … in the Making! 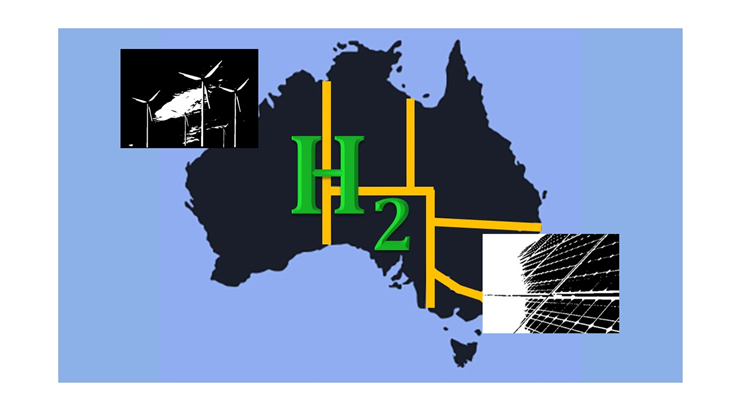 “Lucky country! – You’ve done it again!” Australia has a knack of getting lucky. Or is it that Australia makes its own luck? Regardless of how one sees it – Australia is well on its way to becoming a global HYDROGEN POWERHOUSE. With Hydrogen - a commodity that the world is lining up for now, Australia is all set to cash in

For decades Coal sustained the Australian economy. Then came Natural Gas, cleaner than coal and in great demand. And soon there will be HYDROGEN – 100% clean and in demand

What is motivating Australia’s quest to be a global Hydrogen supplier? Two things – market pull and government push

Pressure is mounting on economies of the world to meet their respective commitments under the Paris Accord on Climate Change to reduce net GHGs to zero. The target may seem a distant 2050 but there are intermediate milestones along the way, significantly in 2030, that are forcing countries to find clean, green fuels to replace dirty fuel in order to meet these targets, fast!

HYDROGEN is a key energy vector that figures very highly in these quests, owing to its impeccable green credentials. With humongous projects in the pipeline for manufacture and supply of Hydrogen and Hydrogen-related fuels, Australia will soon be ready to stake its claim in the global top tier of Hydrogen powerhouses

Hydrogen will re-write the global energy map. Depending upon how one approaches, conservatively 17% (Statista) to optimistically 25% (BloombergNEF) of the global energy demand is expected to be met by Hydrogen by 2050

At $2 / kg of H2,, considered the holy grail target, this is equivalent to USD 400 BILLION in 2050. Key price drivers like advances in electrolyzer technology and increasing scale of Hydrogen production are trending in the right direction to achieve the holy grail of “H2 under $2” 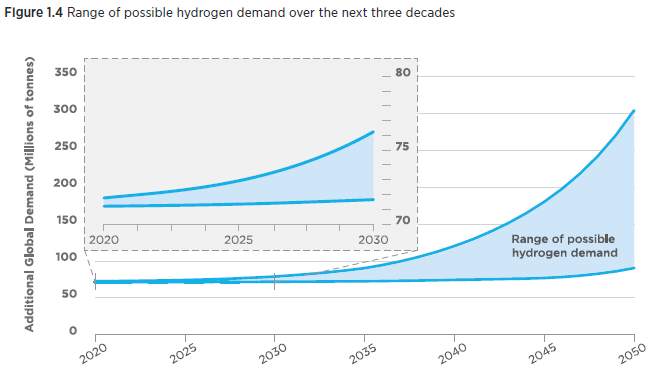 Driving Australia’s export demand will be chiefly Japan, which expects to use 10 million tons of Hydrogen per year by 2050. Add, Korea demand which is expected to be nearly 2 million tons by 2030. Plus Germany and other Asian economies too will figure high in the list

If recent number of capital raisings on the Australian Stock Exchange related to Hydrogen and Hydrogen-fuel related projects is any indicator, then it clearly indicates that corporate Australia is in full swing with regards to Hydrogen investments. Here is a sample: (Disclaimer: see at bottom)

In November 2019, Australian Government released its National Hydrogen Strategy. This envisioned Australia as creating a clean, green, innovative Hydrogen industry and positioning Australia as a significant exporter by 2030

A key element of Australia’s approach will be to create hydrogen hubs – clusters of large-scale demand - eg at ports, in cities, or in regional or remote areas - to provide the industry with its springboard to scale. Hubs will make the development of infrastructure more cost-effective, promote efficiencies from economies of scale, foster innovation, and promote synergies from sector coupling

The popular saying goes – “well begun is half done”. It aptly applies to Australia. With its resources, and skills and backed by a well-intentioned government, Australia has setup itself to take advantage of increasing global momentum for clean Hydrogen and turn into a major energy export. This will potentially generate thousands of new jobs and billions of dollars in economic growth between now and 2050, whilst simultaneously helping to reduce GHGs emissions in Australia and the world

What is motivating Australia’s quest to be a global Hydrogen supplier? Two things – market pull and government push

This is great framing, Sandeep-- we've seen many technologies have either that push or pull but still fall short, but an emerging space that has both happening simultaneously can overcome some more challenging hurdles, for sure.

Do you think there are specific lessons from Australia's early days in this space that supporters in other countries can/should learn and apply to their regions?

Regardless of the reason, I believe the coming Hydrogen theme can be a great leveler. Countries that have been heavily dependent upon imported fuels to drive their economies have an opportunity to become fuel creators and exporters. Sun and Wind are everywhere and countries like Chile, Kazakhstan and some countries in North Africa are great examples where steps are being taken to marshal these resources for Hydrogen production for own and export purposes

Regardless of the reason, I believe the coming Hydrogen theme can be a great leveler. Countries that have been heavily dependent upon imported fuels to drive their economies have an opportunity to become fuel creators and exporters

This is a tremendous point-- how much was the 20th century driven by which countries had fossil fuel reserves and which did not? If the hydrogen economy can even approach a fraction of that influence, what country wouldn't want to position itself to be ready to take advantage of that-- especially when not dependent on luck of the draw of whether those energy resources just happen to be under their feet?

Sandeep, I don'I want to burst your hydrogen bubble but most experts agree that hydrogen is 8x more energy intensive to make and use and store than Solar PV. H2 is just an energy carrier and not an energy source. Read the view of H2 from one of the richest and inventive men, Elon Musk.

So in the long run I think Australia will see it is making a poor choice.

What about where hydrogen can provide opportunity to store energy from excess solar? There are some things hydrogen can do that traditional energy storage in batteries cannot

We have seen in many instances - perhaps the first co-incidentally occurring in South Australia in 2018 (?), then in UK in Dec 2019 and even in Latvia in Jul, 2020 - where Solar and Wind produced so much energy during daytime that spot prices of electricity went negative! There were no takers! It is in these instances grid guys and Solar & Wind owners are all better off diverting this extra energy into Electrolyzers to produce H2. When your main input is free or really cheap there is certainly a business case. Green H2 is all about that anyway. It is an arbitrage opportunity - pure and simple - make when low, sell when peak

Anyone undertaking to produce H2 ought to have offtake contracts in place prior. When writing such contracts there will naturally be an assumption of the input cost (cost of Solar/Wind). So the question who be best able to exploit the situation is dependent upon the offtake agreement the producer enters into. That way the field is open to both types of entities, Solar/Wind guys getting into H2 production as well as IHPs (Independent H2 Producers - my term :-)

Jim, while making green Hydrogen we are NOT competing with Solar PV. Problem emerges when one faces excess Solar (and Wind), say, excess over PPA contracted quantities that the grid wouldn't want. Only then this excess is diverted to generate H2. H2 generated may be stored locally in tanks, or compressed and shipped out or pumped into gas grids. Batteries are ok for storage too but only when dealing with small amounts. Just a case in point, the amount of energy the largest battery in the world today, Elon Musk's Tesla, near Adelaide, South Australia stores up to 129 MWh. Now this amount of energy in equivalent H2 terms is a mere 221 m3 at 350 bar (see my blog Hydrogen by Numbers). Finding this space locally is trivial, compared to Tesla's Big Battery that is spread over hectares! SA Big Battery Myth Busted