Louis M. Michaud has 44 years of experience in the process and power industry, He was a leading process control engineer for a major petrochemical company for the last 24 years of his career. The...

The atmosphere is an engine heated from the bottom by solar radiation and cooled from the top by infrared radiation back to space. Mechanical energy can be produced when heat is carried upward by convection because the work of expansion of heated air is greater than the work required to compress the same air after it has been cooled. Upward heat convection is responsible for the circulation in natural draft cooling towers, boilers, tornadoes, and hurricanes. 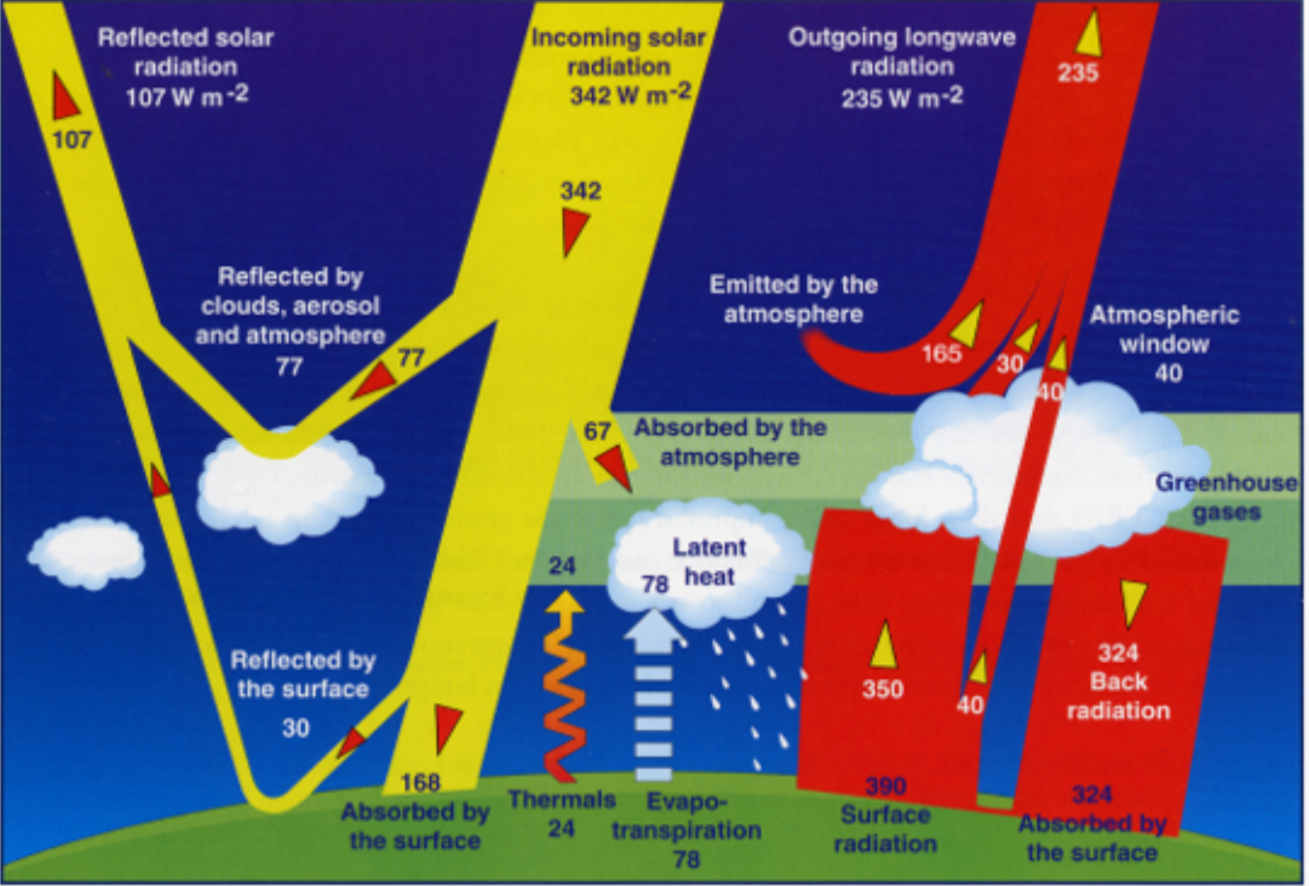 The existence of tornadoes and hurricanes demonstrates that upward heat convection can produce concentrated mechanical energy which can be transmitted to grade. It should be possible to control a naturally occurring process. Electrical utilities and generation equipment providers are invited to consider participating in the development of the Atmospheric Vortex Engine (AVE). Developing the AVE would be an appropriate activity for the power industry. The purpose of this post is not promotional; it is to make the power industry aware that control of atmospheric upward convection could provide energy and to start discussion. The process, protected by now expired patents, could become an important source of clean electrical energy. 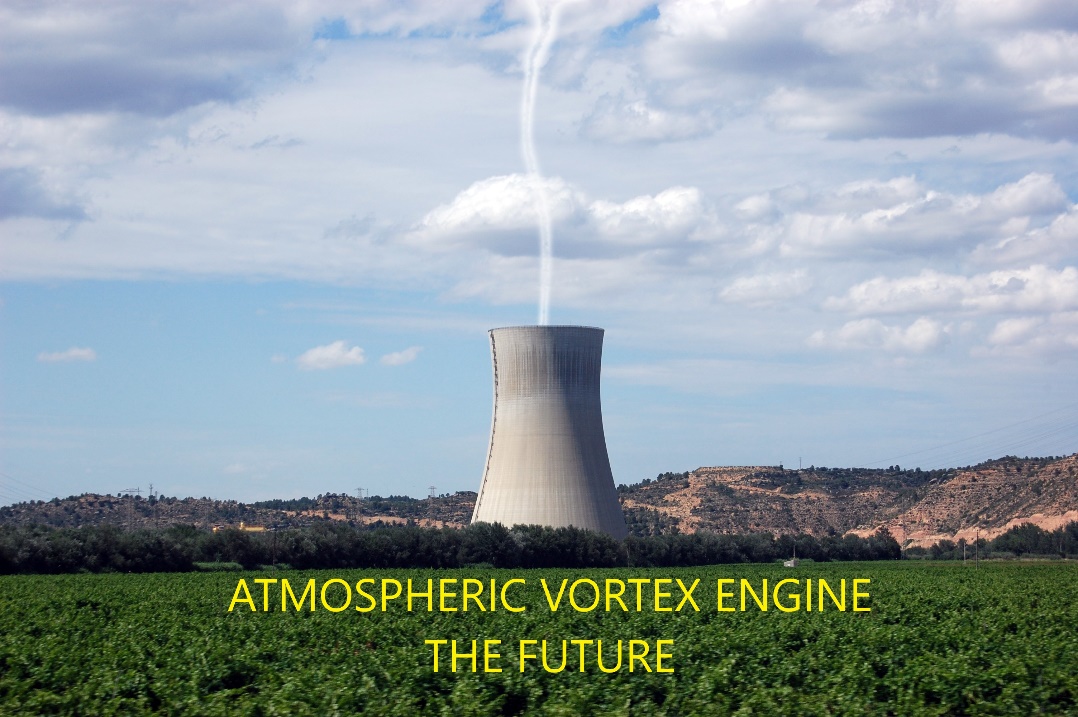 The AVE uses a controlled tornado‑like vortex to capture the mechanical energy produced by atmospheric upward heat convection. A vortex engine would consist of an open top cylindrical tower; warm humid air enters the tower base tangentially via deflectors or via a rotating perforated screen. The energy is produced in turbines located at grade.

The cylindrical tower could have a base diameter of 300 m and a height of 200 m. The vortex could be 50 m in diameter at its base and could extend to a height of 14 km. An AVE could generate 50 to 1000 MW of electrical power. The heat source can be low temperature waste heat from thermal power stations or naturally produced warm/humid air. The tower could be the size of a large natural draft cooling tower.

An AVE would have an area of less than one hundredth of the area of a photovoltaic plant of the same capacity. There is no need for solar collectors. A temporary heat source such as steam is used to heat the air to start the vortex. The intensity of the vortex is regulated by manipulating the heat source, the air flow, and the tangential velocity of the air entering the tower base. The power is dispatchable.

Ideal work when a mass of air is raised is equal to the reduction in its enthalpy minus the increase in its potential energy. For 26 °C air with 90 % relative humidity raised 14 km, the reduction in enthalpy and the increase in potential energy could be 145 and 140 kJ/kg respectively. The difference, the ideal work of 5 kJ/kg, corresponds to a velocity of 100 m/s. Ideal work increases rapidly with rising air temperature and humidity. Ideal work can be transformed from one form to another and can be transmitted from where it is produced to turbines located at grade. 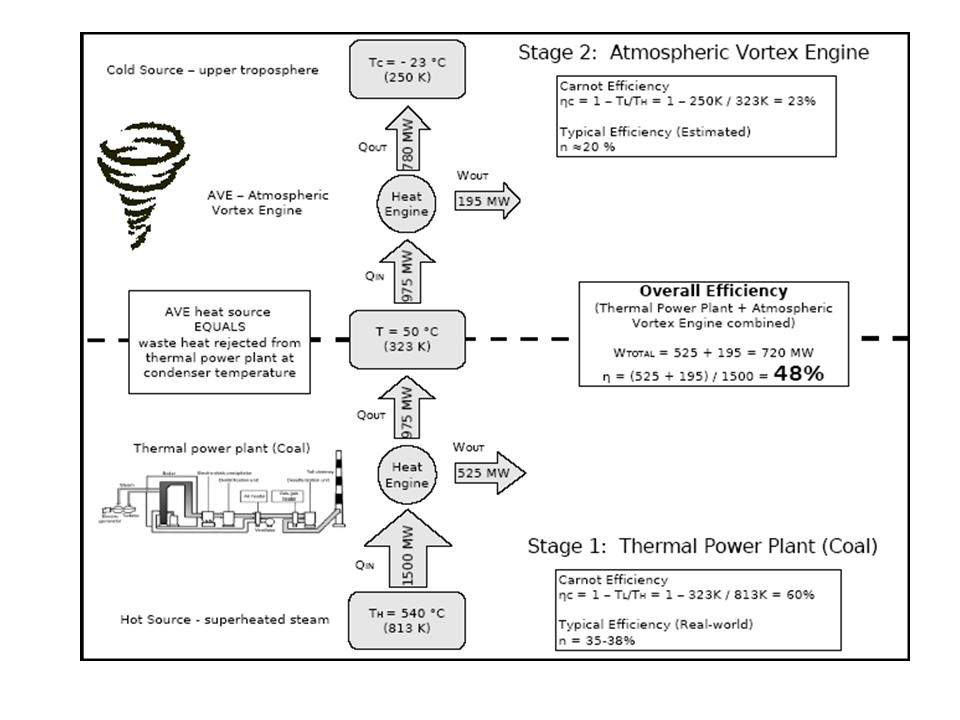 AVE’s could provide large quantities of energy, could alleviate global warming, and could contribute to meeting carbon dioxide emission reduction goals. The AVE has the potential of providing precipitation as well as energy. There is reluctance to attempt to reproduce a phenomenon as destructive as a tornado. Controlled tornadoes could reduce hazards by relieving instability rather than create hazards. A small controlled‑tornado firmly anchored over a strongly built station need not be a hazard.

AVE development is more appropriate to electrical utilities and to generation equipment suppliers than to academic or research organizations. Utilities are familiar with power production, thermodynamics, and process control. Utilities have access to steam, waste heat, cooling towers, generation equipment and power distribution network. The air at the bottom of the atmosphere is in a metastable state. A start-up energy source is required. AVE’s must be large because the air must be raised at least 0.5 km to start to condense its vapor content and to release its latent heat content. The vortex must be at least 5 km high to produce significant power. The AVE could increase the power output of a thermal power plant by converting 20% of its waste heat to work. The power increase is the result of reducing the temperature of the cold sink from the temperature at the bottom of the atmosphere (+20 °C) to the temperature at which the atmosphere radiates heat to space (‑15 °C).

The AVE could be adapted for use with any thermal power plants, whether coal, natural gas or nuclear. The main requirement for the AVE is a large steady supply of low-grade heat. The temperature of the saturated air coming out of power plant cooling towers is higher than that of the warm water responsible for the energy of hurricanes. The heat content of 26°C sea water is sufficient to sustain hurricanes and waterspouts. Waste heat input requirements could be reduced when the surface air is warm and humid.

The process could be developed with relatively little engineering effort. The technology is akin to that of cooling towers and of thermal power plants. With appropriate resources, Engineers with experience in the power industry could easily and rapidly develop the process. Thermal power plants occasionally release steam to the atmosphere. Starting an AVE is like releasing steam, but with a spin.

Initial development work would concentrate on producing stable vortices. Under favorable conditions, it should be possible to produce a vortex with a station 30 m in diameter and a self‑sustaining vortex with a station 50 m in diameter. Minimum heat input could be 50 MW. Learning to control large vortices under most weather conditions will be an engineering challenge. The vortex need not be vertical and could rise with a slant. 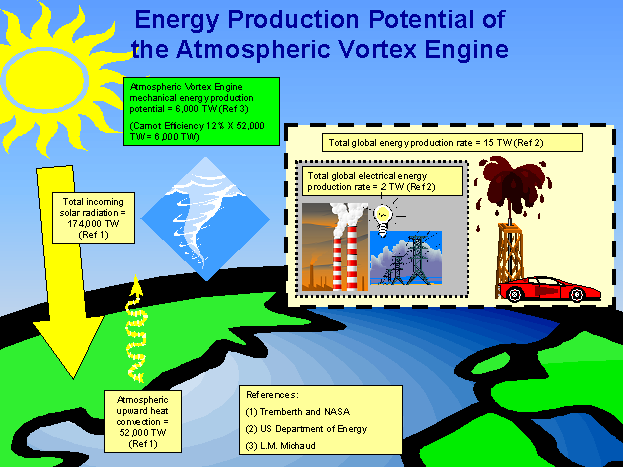 Developing the process will require determination and engineering resources. Developing new high-capacity energy sources is costly and will require the participation of power companies. There will be difficulties to overcome, but they should be no greater than in other large technical enterprises. There are many design options.

The tower would prevent the developing vortex from being disturbed by horizontal wind. Vapor to air mixing ratio and ideal work both decreases rapidly with the level of origin of the air. The ideal work of ambient air at the elevation of the top of the tower is less than that of surface air and is unlikely to be enough to sustain the vortex if it is blown away from the tower. Techniques would be devised to prevent vortex drift away from the tower. Development need not be hazardous. Initial prototypes could be in remote locations. Initial prototypes could be in warm, humid low wind regions. Initial testing could be carried during periods of stable atmospheric conditions under which self‑sustaining vortices cannot form. An unused natural draft cooling would be an asset.

Thermodynamic Basis
The Atmospheric Vortex Engine has the same thermodynamic basis as natural draft cooling towers in which the draft produced by the buoyant rising air eliminates the need for fan power. Efficiency is proportional to height which is limited by structural engineering considerations. Centrifugal force in a vortex acts like a physical tube. A vortex can extend much higher than a physical tower.

Here is a link to a YouTube video showing how low tangential velocity can affect convection.
https://www.youtube.com/watch?v=sIKrdIMz-EM&t=14s
The video clearly shows that the energy source is the buoyancy of the rising air and not the low tangential velocity at the rotating screen. The vortex must extend higher than the visible flame. 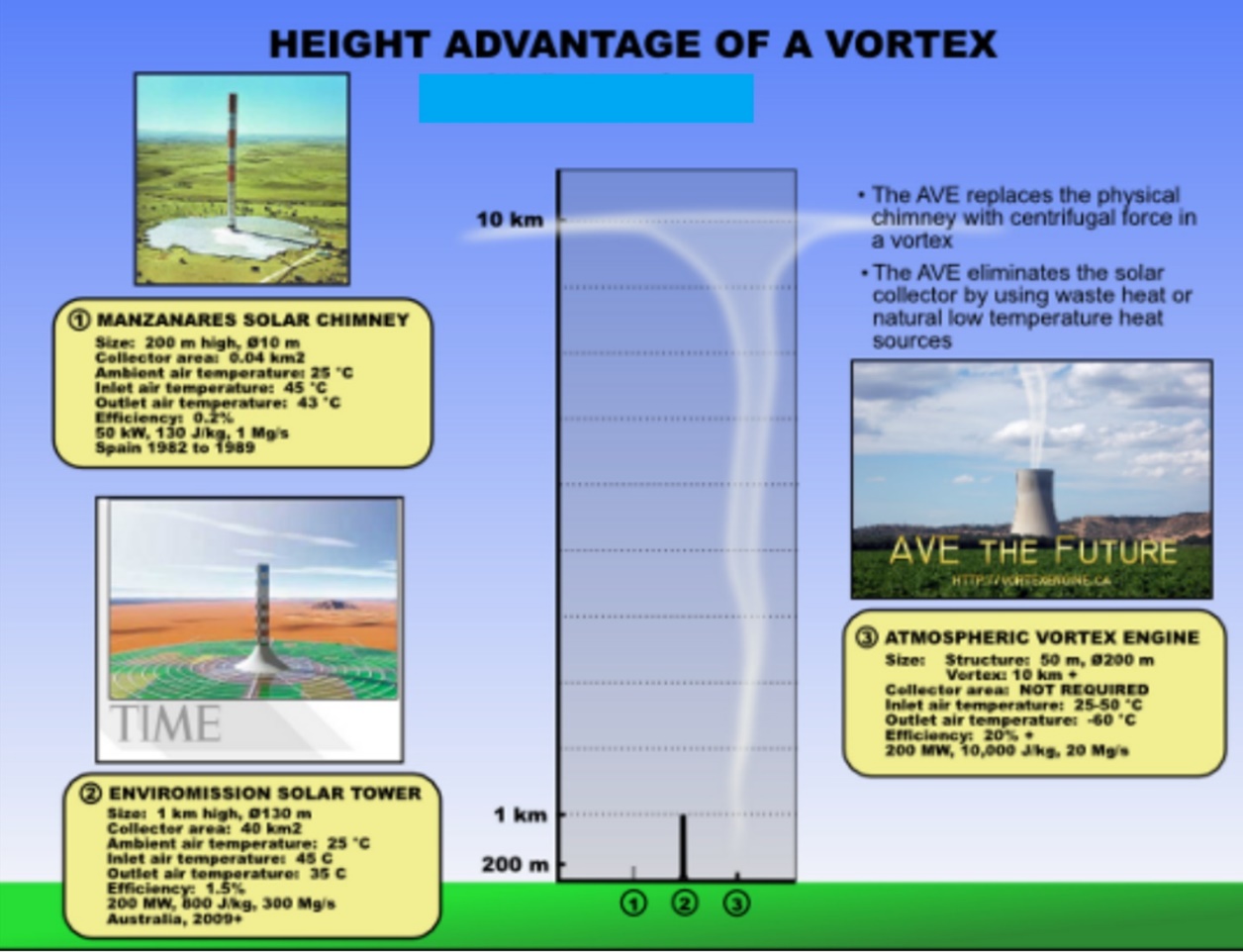 The AVE has the same basis as the solar chimney. The 50 kWe Spanish solar chimney proved that the work produced by the expansion of rising warm can be transmitted down to a turbine located at ground level. The efficiency is proportional to chimney height. The efficiency of the 200 m high Manzanares solar chimney was 0.5 %. In a vortex, centrifugal force prevents ambient air from mixing with the rising air. Solar‑chimneys are uneconomical because the chimney would have to be over 2 km high to match the efficiency of photovoltaic. The energy of storms can be brought down via a vortex and be captured.

The average upward convective heat flux at the bottom atmosphere is 150 W/m2, one sixth of this heat could be converted to work while it is carried upward by convection. The heat to work conversion efficiency of the atmosphere is approximately 15% because the heat is received at an average temperature of +15 °C and given up at an average temperature of ‑15 °C. The average work produced in the atmosphere is therefore 25 W/m2. The mechanical energy production potential of the atmosphere is over 6000 TW, the total electrical power work produced by humans is 3 TW. The power production potential is 2000 times the current world electrical power production and far exceeds other energy sources. The mechanical energy produced in a large hurricane can exceed all the energy produced by humans in a year. Three thousand 1 GWe AVE’s could provide current electrical energy generation. 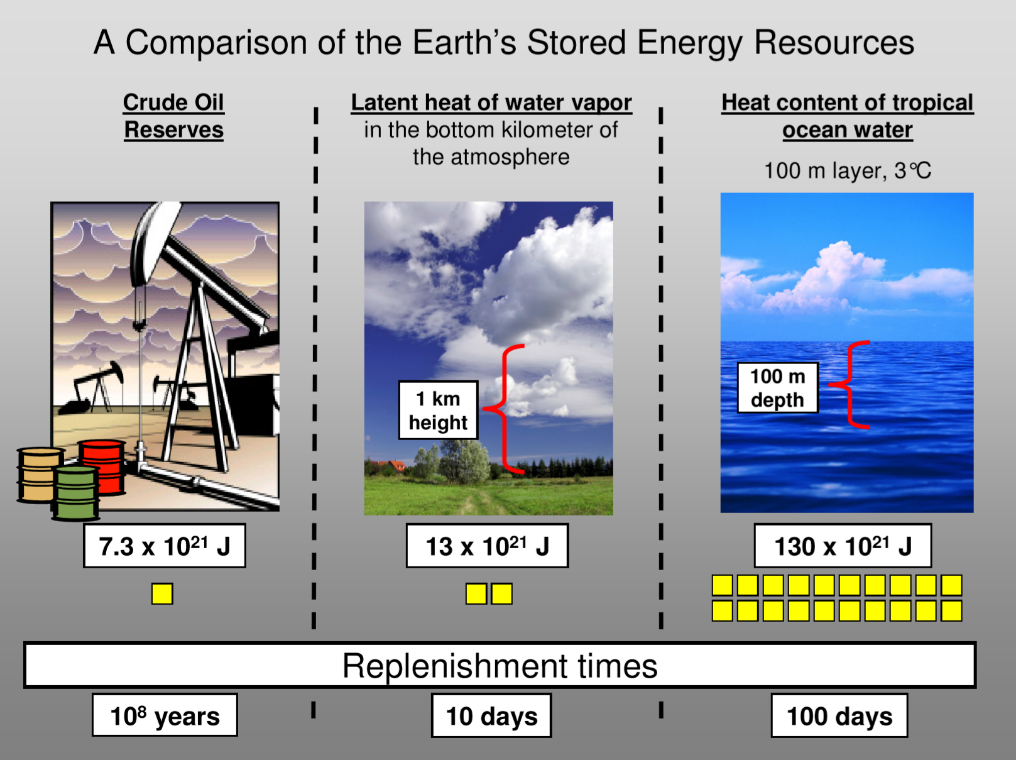 AVE maximum tangential velocity could be 30 m/s. AVE average upward velocity could be 10 m/s. The upward flow in a vortex with a base diameter 50 m could be 10,000 kg/s. A specific work of 5,000 J/kg at a flow of 10,000 kg/s corresponds to a power production of 50 MWe. Friction losses are small because shear in laminar vortex flow is much smaller than in turbulent flow. The vortex transfers the mechanical energy down to the Earth's surface where it is captured by turbines. Like in a piping system, the mechanical energy is transferred to wherever the flow is restricted which in a power plant is at the turbine.

The thermodynamic basis of the AVE is in accord with accepted understanding of how energy is produced in the atmosphere. Atmospheric scientists call the mechanical energy produced when a unit mass of air is raised Convective Available Potential Energy (CAPE). The heat content of the rising air could be enhanced by spraying the air with warm sea water. There is no need for energy storage; the heat already is stored naturally in warm/humid surface air and in warm sea water.

Controlling where mechanical energy is produced in the atmosphere offers the possibility of harnessing solar energy without having to use solar collectors. Waste not your waste heat; use it to produce clean power.

Energy Central 2006 post: “The Potential of the Atmospheric Convection Engine -- Capturing Energy in the Atmosphere”.
https://energycentral.com/c/gn/potential-atmospheric-convection-engine-capturing-energy-atmosphere