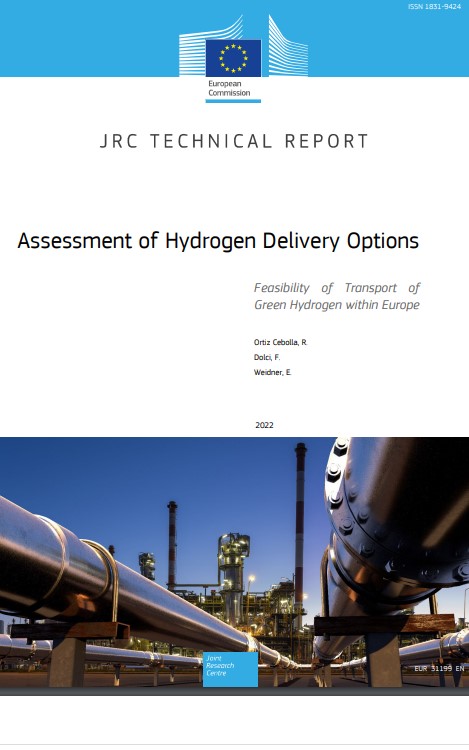 There are several technological challenges to be overcome to enable competitive delivery of large amounts of hydrogen over long distances. • Significant technical improvements over the current state of the art are necessary for the technologies involved in the hydrogen delivery chain. Lowering as much as possible the energy demand for packaging/unpacking technologies is a key issue.

Support will be needed from the public sector, as there is still a lack of clear business cases for green hydrogen, and industry is probably not able to bear the full cost of the considerable R&D and infrastructure effort. 53 This option was not considered in this study, as such a network would not be purpose built for such low volumes, and moreover challenging to implement.

Additionally, a distributed network would likely be based on repurposing of pipelines in our opinion. 72 •

Further research and development should be supported on key issues such as improving the energy demand for liquefaction, enabling transport of bulk LH2, lowering the dehydrogenation temperature for LOHC and reducing cost and energy demand for ammonia cracking. This work should be complemented by techno-economic studies, to reduce the uncertainties in the assumptions for costs and energy demand of packing/unpacking plants. • Upscaling of several orders of magnitude also present a challenge for the industries involved, as the technologies still need to be validated at the scale required by the RePower EU Plan.

De-risking this investment through EIB loans, or additional co-funding on-top of schemes such as IPCEI or EU structural funds may be needed to reach the required scale. •

As a first step, studies are needed to investigating the technical limits for scaling up, as it is not clear yet what the maximum upper limit for capacities of conversion plants, compressors or ships is. This work could be carried out by consortia composed of research centres and industry partners, and possibly supported by the Clean Hydrogen Partnership or national funding schemes.

A technical assessment of optimisation margins for the technologies involved in hydrogen delivery would be useful, which could be addressed in a similar manner as the up-scaling studies. • The possibility of flexible operation of conversion/packaging plants in order to profit from favourable low electricity prices should be investigated, in order to bring down costs.

This can also help to lower the environmental impact, as renewable electricity is likely to have the lowest environmental impact. In parallel viable large-scale electricity and/or hydrogen storage solutions will have to be pursued in order to guarantee the smooth operation of conversion plants. • Since a major cost component for hydrogen transport through pipelines is the construction cost of new infrastructure, actions aimed at clearly understanding the techno-economic potential for repurposing natural gas pipelines should be supported. There are efforts underway at industry level, often funded through national schemes.

The Clean Hydrogen Partnership has issued a call topic in the AWP 2022 [261] which will help address challenges at materials/component level, if a project is funded. More work is needed though on grid operation and other relevant aspects in order to guarantee a safe conversion of existing infrastructure for the transport of hydrogen. The JRC is planning to conduct experiments on the compatibility of pipeline materials with hydrogen in its high pressure gas testing facility [262]. •

Research on the potential hazard for the society and the environment (e.g. toxicity, flammability) of hydrogen packaging solutions is needed due to their presence in new settings. This research should lead to the development of adequate technological solutions and the elaboration of safety regulations. • Modelling of the cost and availability of renewable energy in different geographical locations (within and outside Europe) is of paramount importance for understanding the economic feasibility of hydrogen transport over long distances. JRC has published a report on the assessment of the extent the currently carbon-intensive hydrogen production in Europe could be replaced by water electrolysis using electricity from RES [263], this work should be expanded to a global level.

A study on storage needs for various scenarios, linked to the variability of RES, would also be useful. This action will have also clear implications in terms of energy diplomacy. • A well-developed tool such as the Carbon Border Adjustment Mechanism is necessary in order to assess the actual carbon footprint of imported hydrogen carriers. The full transport value chain should be included, if accurate conclusions are to be drawn

Partnerships are vital if there is any chance to decarbonize the world’s economies and the US can lead by example. And in this vein, funding for basic and applied research and development is crucial for bringing new technologies and practices to..