Robin Duquette is CEO of Pyxidr, a firm dedicated to capturing value with data, analytics, and information technology through commercial optimization principles.Our current initiative is to put...

ERCOT (i.e., Texas) is home to many wind projects under a merchant model, and some of them had to hedge their energy price to secure financing. However, it is far more complicated to hedge wind power generation than dispatchable energy. For instance, the Arctic blast that threw Texas in deep freeze led some wind producers to massive losses because of their hedging program. Without the hedges, they would have triple their cumulated 12-month margin.

Two reasons make hedging wind power generation challenging in ERCOT. One is the “covariance risk” associated with wind, i.e., a negative relationship between its generation and price. This risk is present in many markets where intermittent renewable energy represents a significant share of the generating capacity. Second, ERCOT is an energy-only market, i.e., there is no organized market mechanism to secure long-term capacity. Therefore, the value of capacity shows up in energy price spikes – the more often the price spikes, the higher the incentive to build generating capacity. It is beyond the scope of this article to discuss the pros and cons related to this approach.

We use the ERCOT West zone and the recent events in ERCOT to illustrate the challenge of hedging wind power generation.

What is the covariance risk?

The following graphic illustrates the spot price distribution as a function of wind power generation in ERCOT West. We have juxtaposed a hypothetical hedge consisting of P80 (i.e., 80% chance on average that our wind power generation exceeds that volume) baseload sold at $35/MWh in the ERCOT West hub. It is possible to sell into other hubs that are more liquid (e.g., North or South) but at the expense of a basis risk that further exacerbates the overall risk exposure. 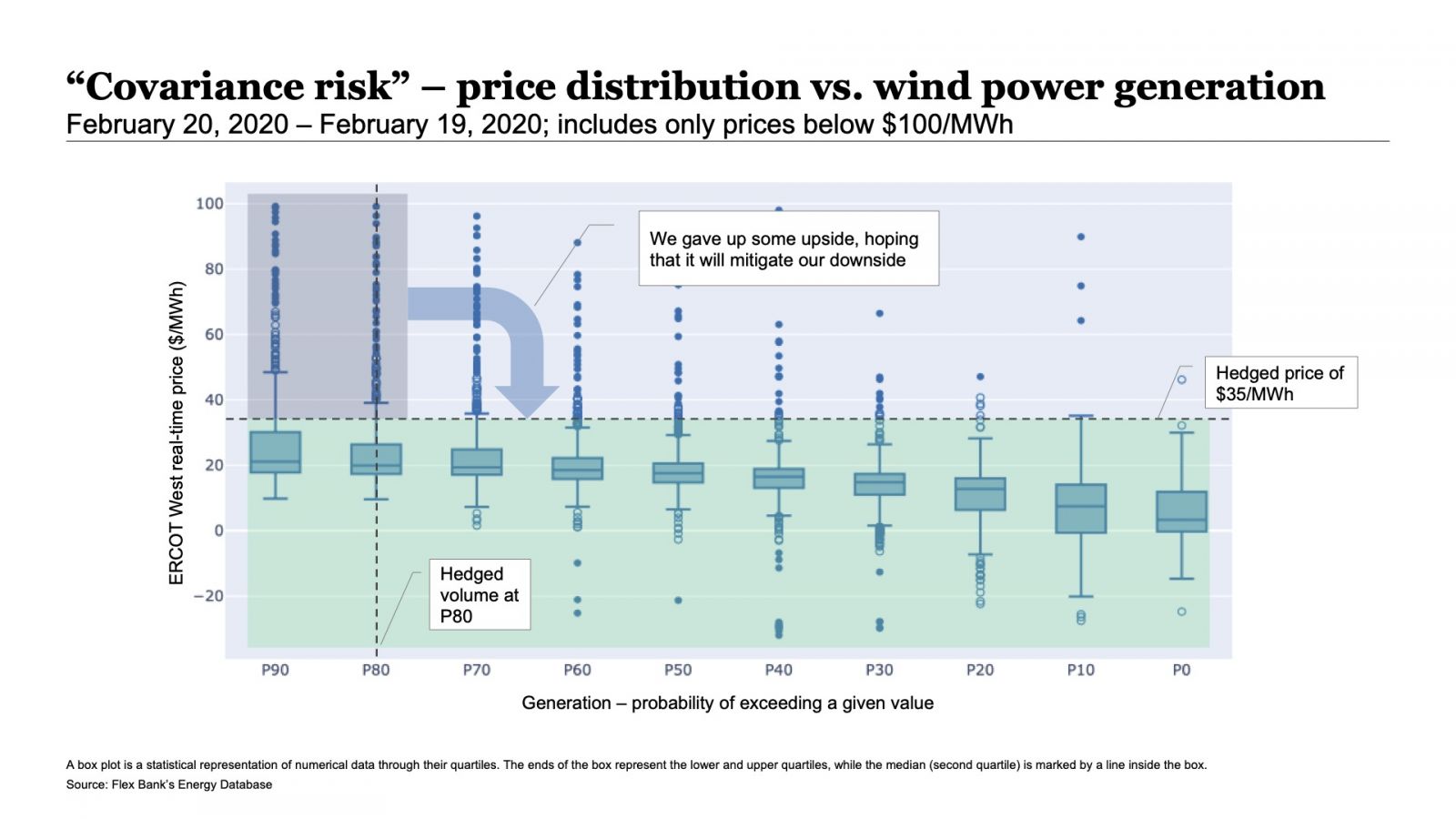 We can easily see on average that prices decrease as wind power generation increases.

As illustrated here, this hedging strategy represents more a speculative position than a synthetic hedge as we bet on limited price spikes when wind power generation is below P80. It is not always the case in ERCOT because wind power generation represents a considerable share of the generating capacity. Therefore, when there is little wind, price spikes are more likely to occur. The Arctic blast is a clear illustration of this phenomenon, as depicted in the following graphic. 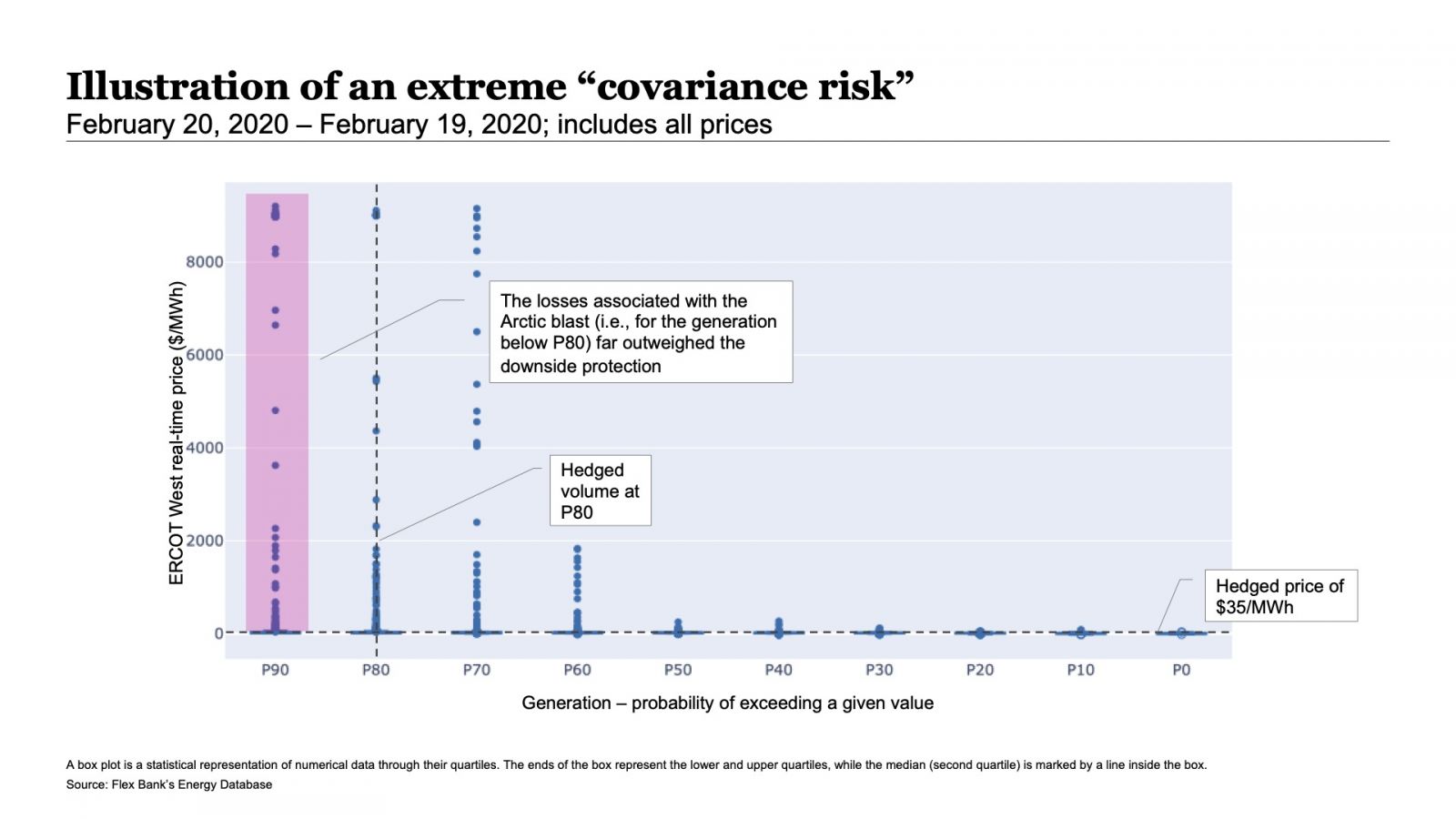 What has been the financial impact of the Arctic blast on the assumed hedge? 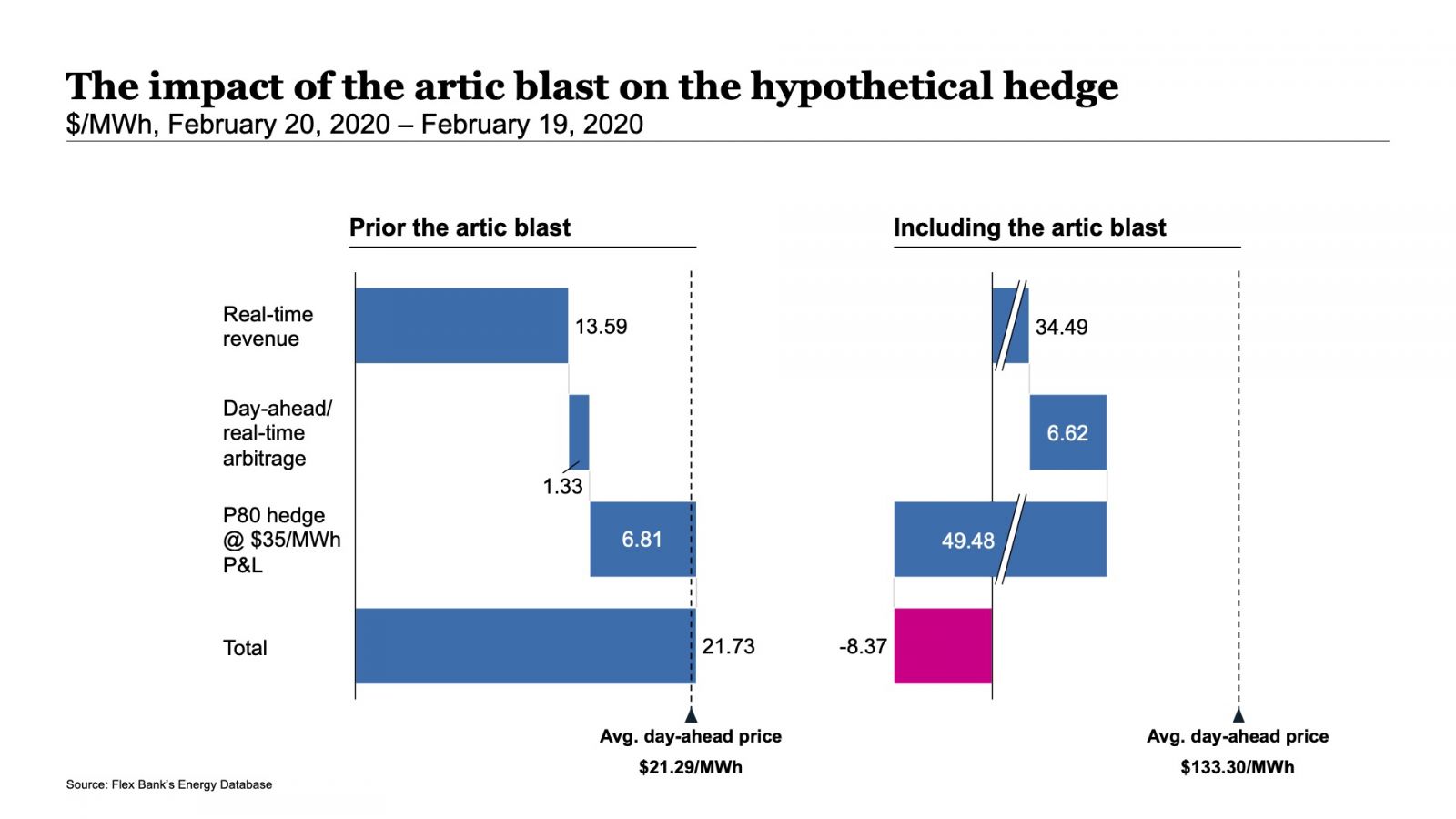 There are three observations to note:

How should we hedge then?

The very first step is to determine the discount associated with the covariance risk and what will drive this discount in the future. Unfortunately, a task that requires heavy analytics as the intricacies related to intermittent renewable energy are complex to assess, even more in a nodal market approach.

We can use the assessed discount to figure out the amount of capital we are willing to invest into a static hedging program (a kind of a “put option”) to protect us against low prices. We can also use this capital to set-up a commercial function that will dynamically hedge our exposure like any sophisticated trading house will do.

In some cases, the anticipated discount may trigger an investment in energy storage that will (partially) offset the renewable merchant risk.

In some cases, the anticipated discount may trigger an investment in energy storage that will (partially) offset the renewable merchant risk.

Thanks, Matt, for your comment. It is clear that more intermittent renewable energy creates an incentive for more energy storage in markets that do not have access to hydropower. However, dispatchable clean energy (e.g., CCGT combined with CCS) is another alternative to mitigating the "covariance risk."

It'll be interesting to see how those two options 'compete'-- both in investment dollars and also integration into the grid. No doubt policy and incentives will play in. Is there room for them both to succeed, or do you think we'll see one triumph over the other?

This is the question I have tried to answer in this article: Carbon capture can be much cheaper than batteries to meet 100 percent clean-power targets. My judgment is batteries are cheap for providing capacity and existing CCGTs combined with CCS are cheaper for profiling intermittent clean energy than 4h+ duration batteries (even at $100/kWh).

Hedging is just another form of gambling. The strategic interests of the public should not embrace hedging/gambling.

Kind of reminds me of when derivatives were all the rage. A number of municipalities flatly refused to take on such risk, in spite of all manner of assurances from Wall Street that there was hardly any risk. Predictably, the self-serving financial experts were full of crap.