Shannon Flynn has more than four years of experience in the technology industry, and two years writing about IT topics. She currently manages content at ReHack.com and writes about green...

On March 31, 2021, Apple announced in a press release its plans for sustainable energy changes in the coming months and years. As part of this announcement, the big tech company stated that it will ramp up its battery-based energy storage capacity in its solar farm, California Flats in Monterey County. The supplementary news came a few days later that, enabling this storage expansion, Tesla is providing many of its signature “Megapack” batteries.

According to Apple’s announcement, the new project will allow California Flats’ 130-megawatt (MW) installation to store up to 240 megawatt-hours (MWh) of energy. The company states that this amount of storage is enough to power over 7,000 homes for 24 hours.

Tesla rolled out the Megapack batteries in 2019 and has since seen success with them, with different sized batteries able to provide more storage than others. Apple will be using the 60 MW model, purchasing enough of them to power the massive solar array in northern California.

While neither company has commented yet on the purchase, the major details have already emerged. Apple traditionally works with lithium-ion batteries and hasn’t announced any plans to work on larger-scale energy-storing batteries. The partnership with Tesla then fits nicely with Apple’s needs and its future decarbonization goals.

The power these batteries will provide will put Apple on track to reach its carbon-neutrality goal. The big tech company aims to run on, and work with partners that use completely renewable energy, drastically reducing its overall carbon footprint.

Together, Apple and Tesla will now create one of the biggest battery-based energy projects in California, the United States, and throughout the rest of the world. This project comes alongside Tesla’s other battery storage ventures, like in Texas, where it plans to establish a 100 MW energy project with its Megapacks.

Tesla and Apple have historically avoided working together, which makes this new deal one to watch. As Apple uses Tesla’s Megapack batteries for energy storage, you’ll likely see more innovations and sustainable dynamics like this one emerge within the tech and energy industries.

While Apple already began its move to renewable energy sources like solar and wind, storage has been the main obstacle. Without proper energy storage, renewable energy — at least at the scale of a company like Apple with such high energy demands — is less efficient. Thus, Tesla’s batteries give Apple a way to move forward with more sustainability and energy efficiency.

The batteries show a significant way to use newer technologies for renewable energy production and storage. With them, other companies can follow in Apple’s footsteps and use battery power with renewable energy to generate electricity and provide power for their entire operations.

As more companies get on board with this dynamic, using Tesla’s batteries or similar innovations, the tech industry can become a leader for environmental change. It will become an industry that integrates naturally with the energy industry, creating clean grids to provide power for businesses and residents alike.

Apple’s bulk purchase of Tesla Megapack batteries will influence others in the tech and energy industries. With such a powerful team, the path to sustainability is now more clear. Renewable energy with battery-powered storage is attainable and becoming more practical. This dynamic is heating up — and for other companies to stand out, they’ll want to join the movement.

"The power these batteries will provide will put Apple on track to reach its carbon-neutrality goal."

Shannon, batteries don't "provide" power - they store electrical energy generated using other sources. in this case, Apple's batteries will be storing electricity from the grid, not from the solar farm to which they're adjacent (they're put there for appearance only).

Lithium-ion batteries are not 100% efficient, either - they waste anywhere from 20-40% of the energy used to charge them as heat. In California, that translates to between 3 and 6 tons of added CO2 emissions for each charge cycle.

So no, these batteries are not putting Apple "on track to reach its carbon neutrality goal". They're disingenuous marketing the company will use to greenwash the massive carbon footprint of their data centers - pretty much, the story with anything connected to renewable energy.

The 240 MWh of storage that Apple is implementing will be less than 1% of the storage going live across the Western Grid over the next few years.

However, Apple is helping to pave the way for other corporations to include storage in their own renewable PPAs. The more storage we get out there the cheaper it will get.. cheaper storage will mean more storage etc.. There is gonna be a LOT of storage on the Western grid by 2030.

Note: CAISO just passed 13GW of solar generation around noon today and that does not include rooftop solar.  With solar more than doubling out West over the next decade there will be plenty of cheap midday generation available to charge all that storage.

The Western Grid will be close to coal-free by the end of the decade and the fuel mix 60-70% Zero Carbon.

In other words much lower emissions. Good job Apple. 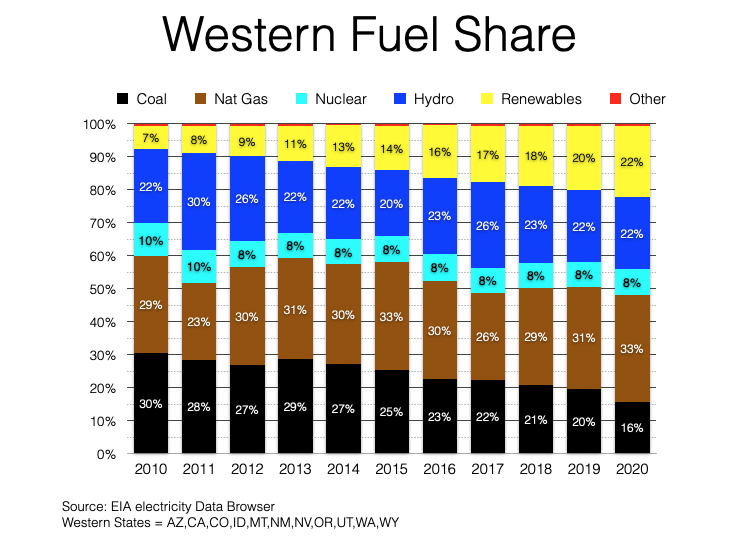 Handwaving and virtue signaling. Do the math. An all-electric American energy economy would have average demand of about 1,700 GWe. Many have calculated that to have firm power (99.97% available is the industry definition) from wind and solar requires 400-800 watt hours' storage per average watt of demand. At today's price and reliability, from Tesla's web pages, the cost would be 4-6 TIMES TOTAL US GDP EVERY YEAR!

If it's really important to eliminate carbon emissions, nothing but nuclear work. Fortunately, it's the safest thing humanity has ever done.

Here is the math.

Down 16 TWh in the last decade.

So coal was down 101 TWh in the last decade.

Because of the large decrease in coal and only small increase in NG - CO2 emissions out West dropped substantially in the last decade. With ZERO help from nuclear.

In the coming decade the same thing will happen - coal will drop to near zero with NG being flat and renewables will make up the the 120 TWh of lost coal generation as well as 30-50 TWh of potential total generation growth from electrification.

Nuclear generation in 2030 for Western states will at best be flat with current generation.  More likely it will continue to decline.  In other words the Western US will see substantial CO2 reduction again this decade with ZERO help from nuclear.

You can pretend that nuclear "works" all you want - but the math shows it's not working.

"In the coming decade the same thing will happen - coal will drop to near zero with NG being flat..."

...but magically remains "flat" over the next one. And though over the last decade the sun went down every night, and the wind often didn't blow at all...

"renewables will make up the the 120 TWh of lost coal generation..."

...in the next decade the sun will magically shine all night long, and the wind will blow constantly, to replace the steady electricity coal produced.

That's not "the math", that's magic. You can pretend magic works all you want, but the sun never shines at night and the wind often doesn't blow at all.

Worse, both provide too much electricity when it's not needed, costing electricity customers in California alone $317 million / year in curtailment charges (2020). And with curtailment rising 65%/yr, by 2029 curtailment alone will cost $47.5 billion/yr (with a "b"). Just to get rid of it. Of ZERO benefit to customers. Enough for two new, 2-GW nuke plants every year.

NG up 15% over the last decade...but magically remains "flat" over the next one.

Perhaps the following will make things clearer. Probably not.

Here is NG Capacity for Western States since 2014. 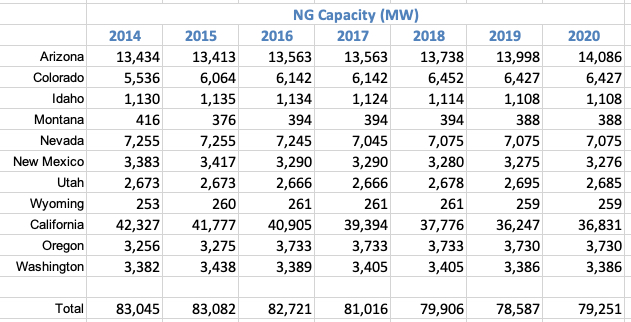 Note that total capacity is actually down - so the extra generation in 2020 vs 2010 is from increased capacity factor. You can only take that so far.

According to EIA there are about 3GW of new NG capacity additions in the next few years and 6GW of retirements. So no help for NG there.

Meanwhile on the Wind/Solar side - here are the capacity numbers since 2014. 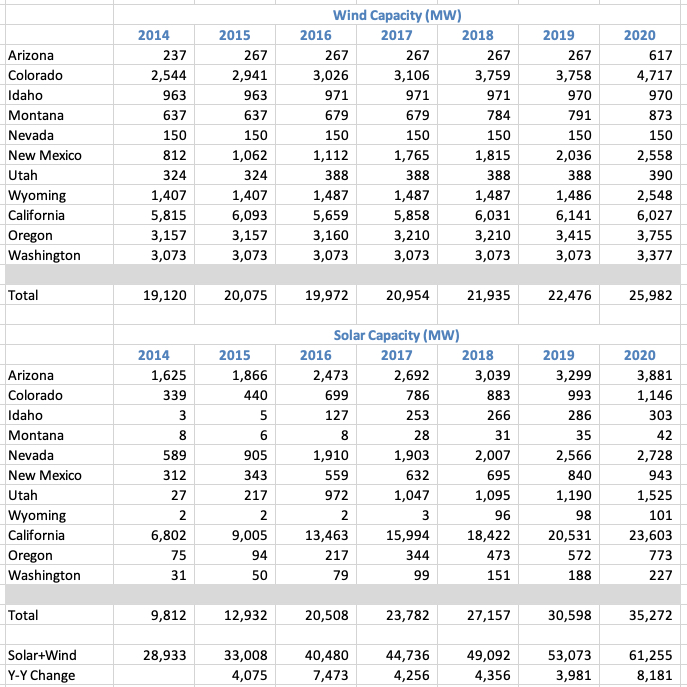 Note: the 8GW increase in capacity in 2020. What is different now vs back in 2014?  Wind and solar are both substantially cheaper and we now have storage as a complement.

If Wind/Solar increases at a faster rate than I anticipate then they could replace coal AND lower NG generation by 2030. No magic needed.

Also, curtailment is an opportunity not a problem.

Hope that clears things up.