Ammonia as a storage solution for future decarbonized energy systems 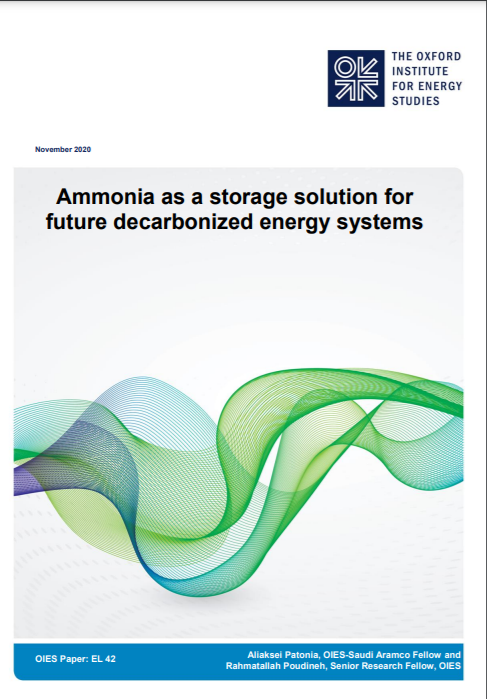 Storing large volumes of energy for prolonged periods of time in a transportable form can significantly assist decarbonized energy and power systems. Specifically, apart from offering the possibility for connecting energy sources with consumers, periodic and seasonal transportable storage can balance the energy system at times when climatic conditions are unfavourable.

This could allow for a more efficient utilization of renewables in the energy system and facilitate the decarbonization of the entire energy sector. Out of all the currently available types of energy storage solutions, only some electrochemical, mechanical, and chemical options allow for the preservation of energy for periods exceeding weeks and months. Despite possessing impressive volume and duration characteristics, mechanical energy storage solutions (such as pumped hydro and compressed air) are less attractive than electrochemical (li-ion and flow batteries) or chemical storage (natural gas, hydrogen, and ammonia) when transportation of stored energy is needed.

On the other hand, at the current stage of technological development, transportable batteries with significantly lower storage duration appear to be substantially less advantageous than most of the chemical options in terms of storage capacity, energy density, as well as deployment costs. That is why chemical storage options represent a promising solution for the long-term large-scale preservation of energy in a transportable form. Natural gas, hydrogen, and ammonia are notable candidates among chemical energy storage solutions. Natural gas has a number of advantages over hydrogen and ammonia, but it has a serious drawback as it is a fossil fuel. Unlike natural gas, hydrogen and ammonia could potentially be generated carbonfree.

Hydrogen has a lower volumetric energy and higher vapour pressure than ammonia. These characteristics create additional difficulties for its preservation and transportation, by making its handling more complicated, expensive, and less safe. On the contrary, despite representing a toxic substance whose ‘green’ production technology is not fully established or scaled, ammonia is a 34 The contents of this paper are the authors’ sole responsibility. They do not necessarily represent the views of the Oxford Institute for Energy Studies or any of its Members. relatively rapidly deployable and easy-to-handle substance that does not produce any carbon emissions in the case of direct combustion of if used for ammonia or hydrogen fuel cell. As a result, for a decarbonized scenario, ammonia, if produced in a green way, is a promising substance for storing transportable energy in large volumes and for a long period of time.

Ammonia best fits in the energy system as an energy vector of hydrogen. Additionally, as a hydrogen carrier, ammonia represents a more economical way of delivering hydrogen over long distances than the conventional way of transporting hydrogen in compressed or liquefied forms. In this sense, green ammonia producers could also benefit from the integration of their product into the hydrogen energy economy of the future.

Apart from the intra-sectoral alignment of different elements of the energy industry across territories and geographic areas, spreading the use of ammonia as a means of longterm large-scale energy storage could allow for cross-sectoral integration, which would offer new benefits to other sectors (such as transport). Despite the unique features of ammonia, its use in the energy system has been very limited. Indeed, about 80 per cent of the global use of ammonia is related to the fertilizer industry and only less than 1 per cent is utilized for energy-related purposes. Thus, the integration of ammonia into the energy system offers a broad space for further improvement. However, the conventional method of producing ammonia, based on fossil fuels, is an impediment to its growth in the energy system. Specifically, in most cases, at the first stage of the ammonia production process (utilizing natural gas to produce hydrogen through steam–methane reforming) is cheaper than using electrolysis.

The second phase (nitrogen production via air separation or pressure swing adsorption) incurs similar costs for both feedstocks (natural gas and electricity). The final stage of ammonia generation (based on the Haber– Bosch process or electrolytic/electrochemical synthesis) again puts the odds in favour of natural gas, due to the low overall prices of this fuel and maturity of the technology. Nevertheless, a set of endogenous and exogenous factors can tip the balance in ‘green’ ammonia’s favour. In particular, in places where climatic conditions allow for ultra-low-cost green electricity (such as that produced from wind or solar PV installations), small-scale ammonia synthesis can compete with conventional ammonia facilities of the same scale. This is currently limited to specific places, but with further technological progress, the production of ‘green’ ammonia by small-scale facilities could become well-spread internationally. Also, the possibility of decentralized ammonia production through distributed generation would lower transportation costs and thus potentially offer a cheaper product. There are other factors that could facilitate the development of the green ammonia industry in the future. Specifically, apart from the likely growth in global demand for ammonia, government incentives for decarbonization (through introducing emission restrictions, carbon taxes, subsidies, or tax breaks for investors) can boost green ammonia production. In sum, ammonia represents a promising solution for the dilemma of long-term large-scale energy storage.

As such, with the potential to integrate different elements of the energy system, it could become a decisive element in the global effort to reduce carbon emissions and enhance overall decarbonization strategies. However, at the current stage of technological development, green ammonia production appears to be economically efficient only if conducted on a small-scale basis in specific geographic regions, where weather and climate conditions favour ultra-low-cost electricity generation. Therefore, there is a need for policy and regulatory support to encourage large-scale deployment of this storage solution. Furthermore, the rules around energy storage, as well as its very definition, need to be updated and clarified so that innovation and deploy

Charley, here you cite the "Oxford Institute of Energy Studies" (OIES), an organization sponsored exclusively by oil and gas interests. Would it be save to assume the energy required to manufacture ammonia will be provided by fossil fuels - and like hydrogen, will only increase carbon emissions?