Since the first market originated more than two decades ago, Independent System Operators (ISOs) and Regional Transmission Organizations (RTOs) have saved customers billions of dollars by avoiding the development of unnecessary overlapping infrastructure, by optimizing generating assets, and by operating real-time competitive non-discriminatory wholesale electricity markets.  ISOs and RTOs do not own generation and transmission assets – they conduct planning, balance the supply and demand of power in real-time, manage the markets, and maintain reliability.  During 2019, the seven U.S. ISOs and RTOs spread across the United States accounted for about 70% (2.6 billion MWh) of all power consumed in the country. 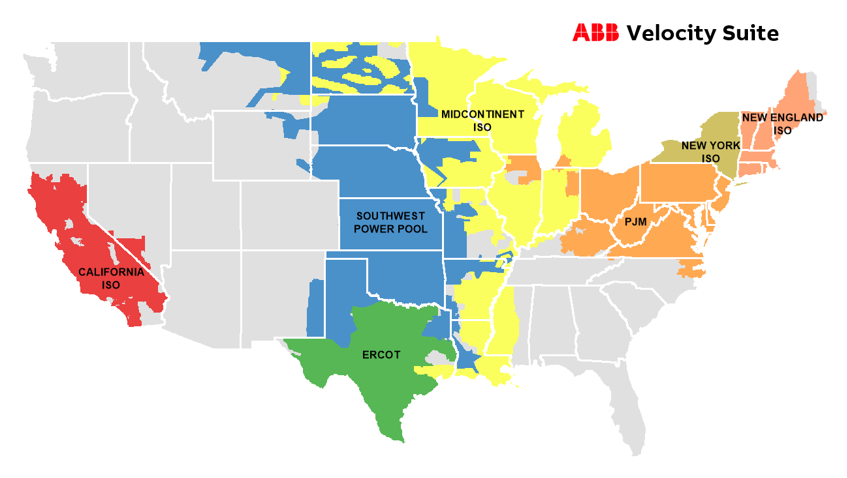 So far, growth in variable renewable resources like solar and wind have developed in resource-rich markets across the central states and California.  Wind has dominated these markets with total electricity production in 2018, accounting for 231.7 million MWh, but in recent years, solar has become a large contributor as well.  In 2018, utility-scale solar across the seven market footprints totaled 40.6 million MWh, with nearly 72.4% generated in the California ISO.

The electricity production from wind and solar resources, the average annual percent growth from the two fuels, and the percentage of all power from zero-carbon resources is presented in the chart below.

Three markets on a fast pace

Over the past several years, three of the seven major organized wholesale power markets in the United States have made huge strides introducing utility-scale wind and solar resources.

Two of the three, the Electric Reliability Council of Texas (ERCOT) and the California ISO (CAISO) have mostly single state footprints, while the third, the Southwest Power Pool (SPP) covers grid operations across 14 central states from the Gulf region to the Canadian border.

ERCOT represents about 90% of all power demand in Texas.  Electricity production from wind and solar has increased at an average annual growth rate (AAGR) of 18% during the past decade.  In 2018, wind accounted for 95.7% of the 72.3 million MWh generated by wind and solar resources in ERCOT.  Ten years ago, in 2009, wind and solar within the ISO accounted for roughly 18 million MWh – only one-quarter of today’s output. 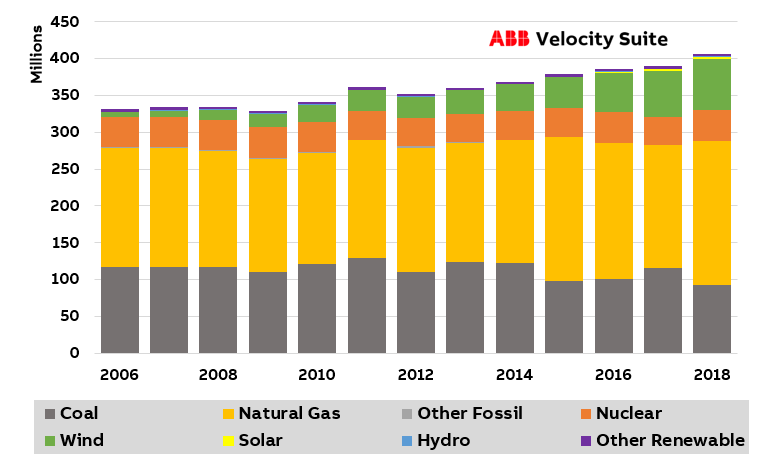 The CAISO footprint covers most of California and a small portion of western Nevada.  During 2018, wind and solar accounted for 22.1% (44.3 million MWh) of all power generated in the market. During the past decade, wind and solar have grown at an AAGR of about 22.9% and utility-scale solar power represented 66.6% of the solar/wind resource pool. In 2009, solar and wind power in CAISO contributed only 6.3 million MWh
– only about one-seventh of 2018’s output. 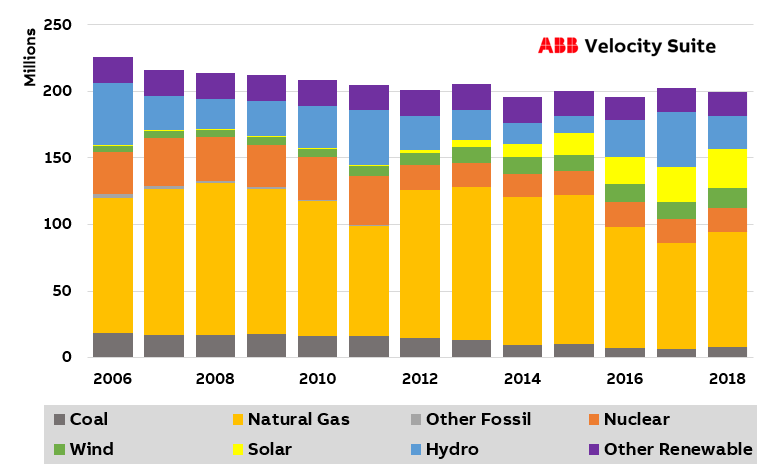 The SPP market showed the largest increase in wind and solar power of any organized market in 2018 – the two resources represented 21.4% (66.3 million MWh) with wind accounting for nearly all (98.9%) of the total.  During the past decade, wind and solar have grown at a robust AAGR of about 25.3%.  Ten years prior, in 2009, solar and wind power in SPP contributed only 9.8 million MWh – only about one-seventh of 2018’s output. 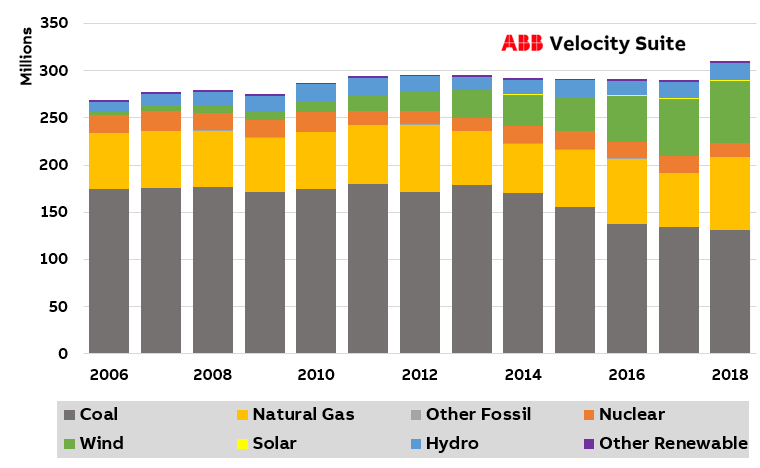 The SPP market showed the largest increase in wind and solar power of any organized market in 2018 – the two resources represented 21.4% (66.3 million MWh) with wind accounting for nearly all (98.9%) of the total.  During the past decade, wind and solar have grown at a robust AAGR of about 25.3%.  Ten years prior, in 2009, solar and wind power in SPP contributed only 9.8 million MWh – only about one-seventh of 2018’s output.

To a lesser extent than the three leading regions in variable renewable electricity production, the Midcontinent ISO (MISO) organized market has also shown significant growth in wind power in recent years.  In 2018, wind and solar accounted for about 7.6% (54.3 million MWh) of total electricity production in the region, with wind representing about 96.4% of the two resource’s contribution.

So far wind has been the dominant contributor to variable renewable energy growth across most regions.  The only exception is in California where utility-scale solar holds a much bigger piece of the renewables pie.

Twenty-four years ago, in 1996, the Federal Energy Regulatory Commission (FERC) issued two orders that would change how electricity is generated, transmitted, and distributed across North America.  Order 888, issued in April of 1996, promoted wholesale competition through open-access non-discriminatory transmission service and created the legal mechanism to recover stranded costs by public utilities and transmission owning companies.  The Order defined the purpose of an independent service operator (ISO) as an entity that manages the generators, high-voltage power lines, and the power markets within the defined system’s footprint.

Order 889 amended the rules of Order 888 by establishing and governing the Open Access Same-Time Information System (OASIS) that provided open access to transmission capacity, prices and other information which enabled open access on a non-discriminatory transmission service.  The order further defined how independent power producers and power marketers would have fair access to the transmission grid.  And then in late 1999, FERC issued Order 2000 which amended its regulations under the Federal Power Act (FPA) to form Regional Transmission Organizations (RTOs).

The designation of RTO requires numerous additional characteristics and functions to be met in order to hold official RTO status.  The seven organized markets in the United States serve as ISOs or RTOs, and in some instances, both.  The markets coordinate generation and transmission across wide geographical areas that sometimes exist primarily within a state’s borders (e.g. CAISO, ERCOT, and the NYISO), but often across multiple states and even Canadian provinces. The organized system operators forecast load and schedule generation to assure reliability is met in case a power line or plant is lost to the grid. Participants in the markets buy and sell power on a day-ahead or a real-time spot market basis. The goal of an ISO/RTO is to provide customers with the lowest cost electricity by optimizing the array of generation resources and the transmission grid, and most importantly, organized power markets work to achieve reliability parameters.

The 7 organized power markets in the United States include:

Over the past several years, three of these regions have added a tremendous amount of renewable capacity, and in so doing, have led the growth in solar and wind development across each market footprint. 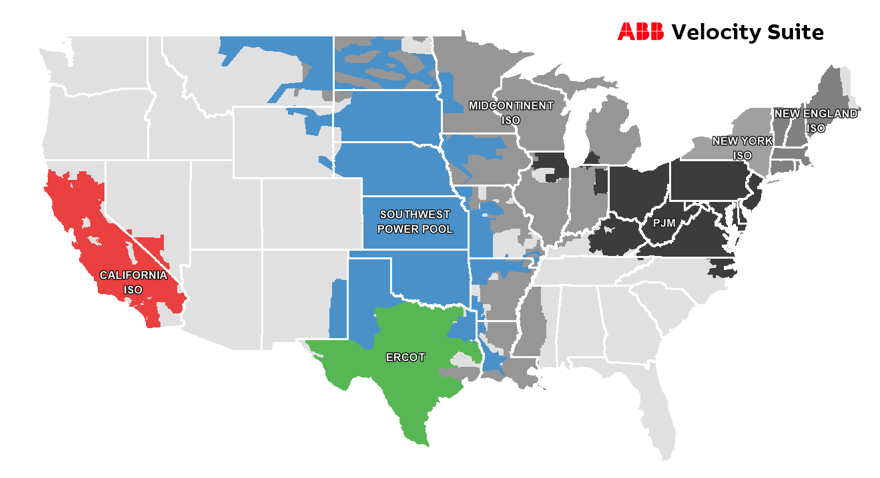 SPP  – 18 million people served across 14 states within RTO’s footprint and manages about 60,000 miles of high-voltage transmission.

The New York ISO (NYISO) is the leading market in terms of zero-carbon electricity production, where 57.3% of all power in the New York market is derived from nuclear, wind, solar, hydro, and other renewable fuels.  CAISO is the second-largest market for zero-carbon resources, where 52.8% of all power generation is zero-carbon.   In terms of volume, the PJM Interconnection is by far the largest zero-carbon electricity producer among all organized American markets – in 2018, 335 million MWh was produced – nuclear alone accounted for 85.1% of that total.

Driven by declining costs and federal, state, and local support, both utility-scale solar and wind development are expected to gain additional market share during the next several years.  There are currently about 10,000 MW of wind and 18,500 MW of solar capacity either under construction or testing across the country and expected online within two years, this according to project data compiled by the ABB Velocity Suite research team. With that level of renewables construction ongoing, expect the organized power markets to continue growing their solar and wind electricity production numbers during the years to come.

Definitely interesting to see wind's peak penetration despite relatively minimal energy storage capabilities. How do you think further investment into that storage capacity could affect the rest of these numbers?

The growth of wind in ERCOT has been amazing but the real key going forward is going to be solar/storage.

Looking at generation on ERCOT yesterday in chart below you can see that Solar is starting to "heat up".  By 2021/2022 the daily solar generation number will be above 100,000 MWh.

This will destroy the remaining coal in TX. 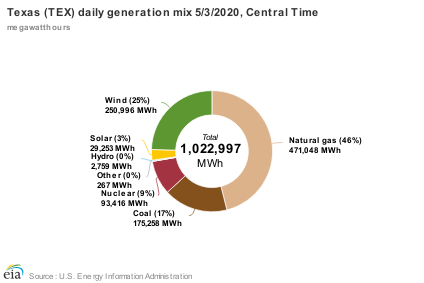