Based on the 12-month period of reporting, from November of 2019 through October of 2020, electricity production by coal, renewables, and nuclear converged to account for approximately 20% (each) of United States electricity production.  During the period, driven by the pandemic, power demand dropped by 3.7%.  For the first time, nuclear surpassed coal. At the same time, renewables, driven by increased wind and solar output, converged to nearly equal the electricity output of both coal and nuclear. At the same time, natural gas topped 40% for the first time, continuing its rapid displacement of coal in the overall fuel mix. 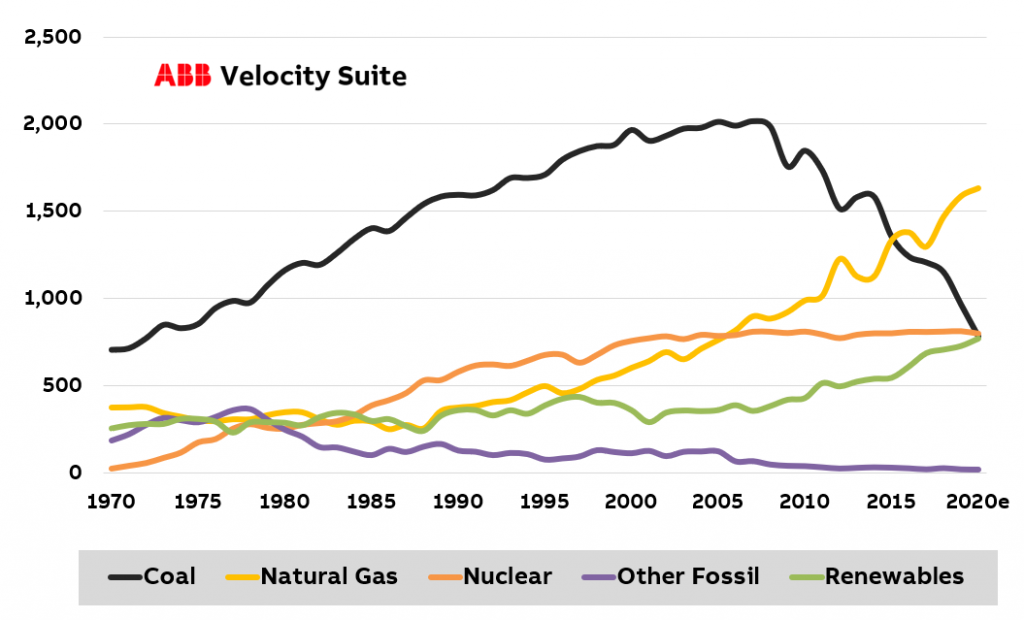 Driven by stay-at-home work orders, the sale of electricity to residential customers during the period increased by nearly 1%, while commercial and industrial power sales fell by 5.7% and 7.4%, respectively.

These trends will continue in 2021, as natural gas continues to displace coal in the fuel mix.  Meanwhile, the trio of wind, solar, and energy storage will surge upward with continued support from ever-improving cost parity and recently enacted tax credit extensions that make renewable investment extremely profitable.  The Hitachi ABB Power Grids’ Velocity Suite team is tracking more than 45 GW of natural gas, wind, and solar (GWS) projects currently under construction, testing, or in early-stage site preparation.  Wind leads the way with more than (16.8 GW), solar (15.9 GW) follows, and natural gas (12.8 GW) rounds out the expected build-out.  The GWS expansion shows no sign of slowing down, so expect renewables to surge past both coal and nuclear in the years to come and for natural gas to continue to play an integral part in balancing a grid quickly becoming dominated by wind and solar resources.

What "trio" of wind, solar, and energy storage?

Kent, as much as some would like to imagine huge batteries as the perfect solution to the perennial problem of solar and wind intermittency, the vast majority of grid storage facilities are built on-premises at CCGT gas plants. They're being used to store gas-fired electricity generated at night to help meet the next day's peak consumption.

In practice, energy "generated" by batteries is only recycling gas generation - and increasing carbon emissions in the process.

"Energy storage (batteries and other ways of storing electricity, like pumped water, compressed air, or molten salt) has generally been hailed as a “green” technology, key to enabling more renewable energy and reducing greenhouse gas emissions.

But energy storage has a dirty secret. The way it’s typically used in the US today, it enables more fossil-fueled energy and higher carbon emissions. Emissions are higher today than they would have been if no storage had ever been deployed in the US."

Batteries have a dirty secret

If there is successful trio involving storage, it would be "natural gas, storage, and consumer naïveté".

Hmm, I didn't know that, but it makes sense. Any grid storage facility requires access to the grid, and colocation with an existing generation facility is an efficient way to do it. Proximity to a source of power for charging the batteries minimizes transmission losses.

The arrangement doesn't have any direct effect on the fraction of total demand that will be supplied by wind and solar resources. Those will supply whatever they can supply, and the rest will be supplied by other resources. Storage in proximity to CCGT doesn't change that, but it does have system benefits. It allows efficient CCGT units to supply more of overall system load, at the expense of less efficient peaking units.

In practice, energy "generated" by batteries is only recycling gas generation - and increasing carbon emissions in the process.

No, it's recycling whatever mix of generation went into charging the batteries. It doesn't increase carbon emissions, beyond the limited extent to which round trip losses increase the total generation load. It will reduce carbon emissions, to the extent that it provides an alternative to curtailment when production from wind and solar resources exceed regular load.

Agreed I could understand this to be the case-- but I'm actually curious to see the numbers behind it, or is this more of an anecdotal statement? Would love a source-- I don't see specific numbers from Bob's linked article, and it's also been over 2 years since it's written so I'm curious if the numbers have tilted in any way during that time

"No, it's recycling whatever mix of generation went into charging the batteries."

Again, in practice - most grid-scale storage facilities are being charged directly from the output of gas plants, to be able to arbitrage generation from periods of minimal demand to peak-pricing periods.

"It will reduce carbon emissions, to the extent that it provides an alternative to curtailment when production from wind and solar resources exceed regular load."

That's what renewable folks tell us. In practice, storage is currently insignificant - a speck on the radar.

On Aug. 15 2020, the day the lights went out in California, the maximum contribution of all storage in the state was 80 MW for a period of ~10 minutes, just before noon. At the time, demand was 35 GW - 440 times all the capacity California batteries had to offer. It provides no appreciable alternative to curtailment.

Why were batteries discharging, instead of charging in the noonday sun? I don't know. But more than likely, a cloud went over the sun, or the wind drifted off, and stored electricity was necessary to maintain grid stability - the only thing grid-scale batteries do well, and only necessary thanks to irregular, intermittent, unreliable renewable output from wind and solar farms.

"It doesn't increase carbon emissions, beyond the limited extent to which round trip losses increase the total generation load."

It would seem that way, wouldn't it? But it's not just round trip losses. Storage decreases overall system efficiency:

"To avoid increasing emissions, it’s not enough that the energy stored is less carbon-intensive than the energy displaced. It has to be a lot less carbon-intensive. Hittinger put it to me this way in an email: assuming storage efficiency of 80 percent, 'for storage to break even [on carbon emissions], the source of charging energy would have to be 20% cleaner (emissions/MWh) than the thing that you are displacing when the storage is discharging (on average).' That’s just to break even."

I sound terribly pessimistic, don't I? But it's not me, it's the second law of thermodynamics: entropy always increases. I.e., a convoluted, complicated, arbitraged, balanced/unbalanced, intermittent energy system will always be less efficient than meeting demand with supply. Always.

Bob, thanks for your comment.  A lot to think about.  Solving the intermittency problem will be center stage this year and over the next several years.  Battery storage is being planned for almost all utility solar projects.  It'll be interesting to see how well it works once there is scale.  In any event, driven by yet another surge in coal plant closures, the natural gas footprint will only become larger.  Later today I am posting a story on the surge in gas, wind, and solar in recent years . . . just trying to present the facts.  thanks again for your comment.

Thanks for your reply, Kent.

"Battery storage is being planned for almost all utility solar projects."

Though a common assumption is that "tandem" solar/storage projects are storing only energy generated by the adjacent solar farm, the economics don't make sense. In that arrangement, both solar farm and batteries are unprofitable for an average of 89% of every day (global average capacity factor for PV solar is 11%).

Much more profitable would be charging batteries directly from the grid. When arbitraged, energy from batteries can be profitable at any time of day or night, in any weather. However, it's even dirtier than the current grid mix, with up to 407 kg/MWh of additional CO2 emissions.

I've reached out to 8-Minute Energy, developers of the highly-touted Eland Solar and Storage facility near Los Angeles, for verification all energy stored in its batteries will be generated by the sun - but none has been forthcoming. Electricity customers deserve verification, of course, because selling recycled, dirty grid energy as "clean" constitutes consumer fraud. If that's their plan, 8-Minute will have a class action lawsuit on their hands.

It's very encouraging to see renewables growing so fast. Their low cost and advanced Battery Storage.

The reliance on old outdated Nuclear and short supply Natural gas. They like other fossil fuels are finite with NG coming mostly from Fracking. That has a very short life.

I would hope to see more hydro from upgrading old dams and even some large geo thermal plants in the near future.

"I would home to see more hydro from upgrading old dams and even some large geo thermal plants in the near future."

I would too, Jim. But guess what? Both large hydropower and nuclear were deliberately excluded from participation in California's landmark energy legislation (SB-100), requiring our state's electricity to be 100% carbon-free by 2045.

With the urgency of addressing climate change, why would anyone want to take two of the most reliable, zero-carbon sources of energy off the table? Here's why: California energy policy is not about lowering carbon emissions, it's about selling more natural gas, solar panels, and wind turbines.

Bob, Thanks for that insight. It's sad to say but most of the policies are based on $$$$ not saving the world and even caring about it. I don't know how to change that age old problem.

Jim, I've given a lot of thought to that very topic without coming to any solid conclusions. I do believe, however, that allowing any signficant societal problem to be solved by self-interest - competition - is a recipe for disaster. Whether it be segregation, immigration, climate change, air / water pollution, pestilence, plague, national security, personal security, etc. (the list goes on), the solution to public problems can only be found in public policy - government must take care of the problems which affect us all.

Whether they're big or small, solving them requires leadership - a leader with determination, compassion, and persistence. As an example, Franklin Delano Roosevelt was prototypical. FDR took the interests of a battered American public under his arm and ran with them. Without letting anyone stand in his way, he negotiated some of the most progressive legislation in (at the time) world history.

Whether Joe Biden is capable of rising to that level remains to be seen, but I believe his age is an asset. Self-interest tends to soften with age, as we come to appreciate our limited time on Earth, and when it happens to a leader it's usually good for everyone.