On Wednesday at 5:54 PM last week, the location marginal price for wholesale electricity in New York City shot up to $5,130/MWh - or in consumer terms, $5.13/kilowatthour.

• More than 25 times as expensive as normal for this time of year
• At that rate, a consumer with a typical 2-ton central air conditioning system would be paying $36/hour for electricity at the hottest time of a summer day.

The reason? The threat of a thunderstorm threw real-time markets into a tizzy. And without Indian Point's reliable power lighting the way for city workers to drive home, the New York Independent System Operator had to buy whatever was available, at whatever price (needless to say, New York solar was non-existent). 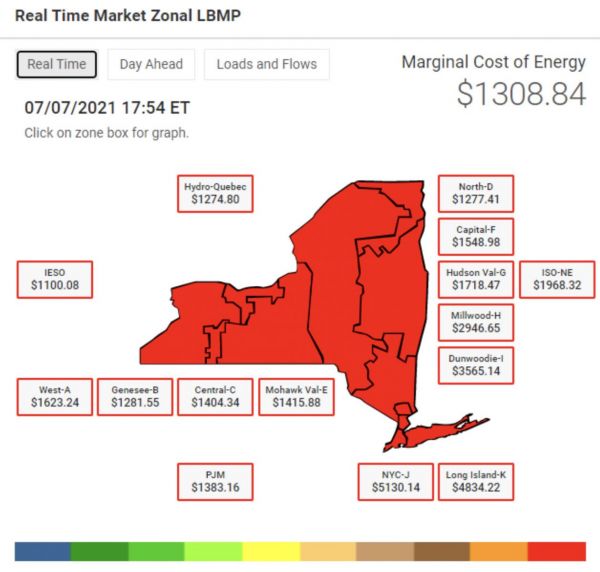 I would be more interested in a comparison with a similar situation (i.e. a thunderstorm during this time of year) while Indian Point was open-- is it 25x higher then that price because the plant would have just been tapped into, or would there still have been a spike (albeit a smaller one)?

Good question, Matt. Because every day is different - different weather, power mix, demand - it's impossible to say exactly why the price was so high at that moment.

NYISO breaks the LBMP (Locational Based Marginal Price) down into three components, however, and even though they don't show the price at the time of the demand spike (5:46 PM) the cost of congestion at 6:00 PM (-495.11) was 70x what it was on the same day in 2019. I skipped 2020 because Unit #3 at Indian Point was still in operation.

The formula NYISO uses to determine the marginal cost of congestion takes various factors into account, but compares what the price "would have been" for electricity if there were no binding grid constraints at a given moment, to the real-time price at the same moment. Then it uses the ratio to calculate the part of the cost that can be attributed to grid congestion.

Binding grid constraints are automated limits put on transmission over paths in real time to prevent overloading them. There was a 500kV path from Indian Point to NYC before April of last year that is no longer serving load, so demand must be served from other paths that weren't designed to handle it.

The existing grid was designed with radial topology - power plants at the center of webs of transmission radiating outward. Many "distributed energy" advocates don't realize it was designed that way for a reason: it's the most efficient way to transmit electrical energy to the greatest number of people. It's why they can't just plop down a solar or windfarm in the middle of nowhere and hook it up to the wires next to the highway - electricity doesn't work that way. Yet they're quick to blame the "aging" or "crumbling" grid for the deficiencies of their own intermittent, unpredictable sources of power.

The marginal cost of losses is the value of electricity lost as heat from resistance in the wires. I have no idea why losses are represented as a positive number and congestion is negative.