The German solar industry has been very successful in driving high solar penetration rates for the country as it leads the world with 32% of the country’s electricity consumption produced by solar in 2016. This energy transition to renewables is called Energiewende.

Some German farms produce solar energy at high, 20-year guaranteed feed-in tariffs that bring in 40% of the earnings from the farm’s operation.

Is the German solar industry a model for the rest of the world to follow, both technically and financially? 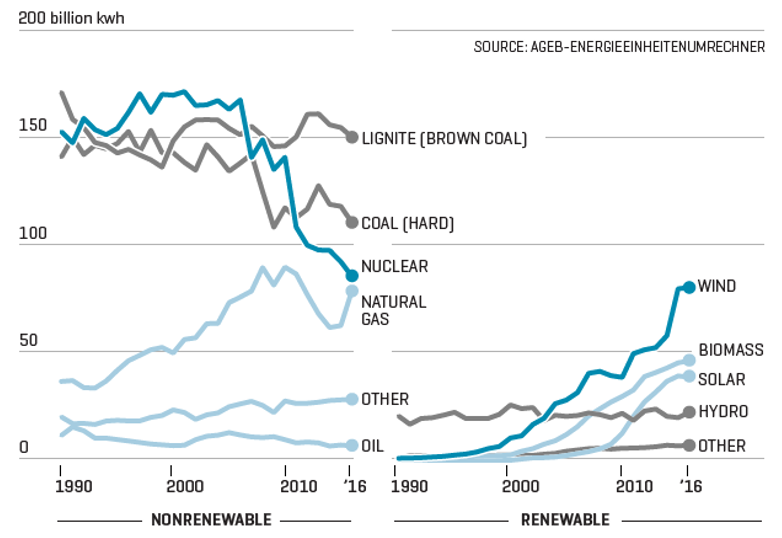 Technically, the transformation of the German energy industry has been impressive, however, Germany spent 25 billion euros ($26 billion) on renewable energy in 2016, most of which, 23 billion euros, consumers paid through a surcharge on their electricity bills.

The solar surcharge was the biggest reason that the amount the average German household spent on electricity rose to 1,060 euros in 2016 ($1,102), up 50% from 2007. That was an annual compounded increase of 4.6%. Over the same period of time, the U.S. electricity price rose 1.3%, or only 28% of the German electricity price increase.

Germany has become the world’s largest solar market, however its sunniest areas receive only as much sunshine as Seattle, Washington, while Berlin sits at roughly the same latitude as Calgary.

The same “duck curve” phenomena that has occurred in California in the U.S. has occurred in Germany, (see my May 2017 post, “Grid Reliability With Increased Renewable Energy”). With decreasing solar energy prices and increasing solar supply due to the feed-in tariffs, wholesale German energy prices have dropped forcing many gas-fired and nuclear plants into uneconomic operational modes.

While the emissions record has been impressive up to 2015, Germany may have a very difficult challenge in meeting the target of 40% below 1990 levels by 2020. As German solar subsidies and surcharges have produced more solar energy, low prices for German coal and low wholesale energy prices have encouraged the power generators there to use more native lignite.

40 GW by 2040 by Germany is a sign of intent for offshore wind in the next two decadesDraft law lifts maximum bid, adds second component to avoid drawCabinet to decide Wed, stakeholders call for adjustmentsHydrogen (non-grid) fields to be..

Thanks for sharing, Gareth.

Kentucky is notorious for continuing to clutch to the coal industry, so seeing this development is encouraging.