In a post a few months ago (link below), section 3.2, I suggested that one of the solutions for cost-effectively combining wind and storage may be battery energy storage systems (BESS) based on flow batteries.

Several recent advancements in flow batteries have been made that lend hope to an expansion in their role of augmenting renewables. This paper will explore these advancements.

Wind is subject to longer periods of reduced energy (low wind speeds) than photovoltaics (PV) are subject to reduced insolation, and the energy content of the former is less than the latter. Thus ideal battery energy storage systems (BESS) to supplement PV will often not have sufficient duration to fill in the low-energy events for wind.

The energy-containing components of flow batteries are electrolytes that are held in tanks external to the energy-producing "stack", and pumped through the stack to produce energy (thus the term "flow batteries"). Providing energy for a longer duration simply means larger electrolyte tanks. This allows them to supplement the deep and long-duration loss of energy that result from low-wind periods.

The new information that tipped me off to flow battery advancements was an excellent article in Science. I've placed a link to a version of that article which is available to the general public below.

There is one flow battery technology that meets most functional requirements for a competitive BESS: vanadium-based chemistries. However there is a major problem. Vanadium is not a rare metal, but current production is rather low and sources are limited. Vanadium is mined mostly in South Africa, north-western China, and eastern Russia. In 2013 these three countries mined more than 97% of the 79,000 tons of produced vanadium.[1]

China is building the world’s largest BESS based on vanadium flow battery technology. As of the beginning of 2018, site work was in progress on a 200MW/800MWh BESS in Dalian, China. At that time most of the components from which the BESS will be assembled are completed in the manufacturer’s nearby factory.

This battery is currently the largest planned chemical battery in the world, and part of a Chinese government investment to spur the technology.

This BESS is being manufactured by Rongke Power. Dalian Rongke Power Co., Ltd. (Rongke Power) was established in Dalian High-tech Zone in 2008. It is jointly established by Dalian Bolong Holding Group Co., Ltd. and Dalian Institute of Chemical Physics, Chinese Academy of Sciences

The BESS in Dalian will offset 8% of peak demand to enhance grid stability and support black-starts. This BESS is expected to come online in 2020 (image below). 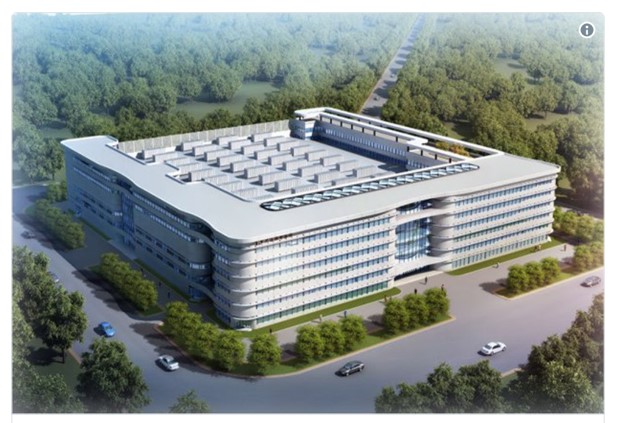 This BESS is expected to have a lifetime of about 15,000 cycles, with no degradation during the first 20 years.[2]

The short term problem with vanadium chemistry flow batteries is that vanadium currently sells for $14 per pound, but the price of vanadium has increased more than 130% over 12 months and more than 500% since January 2016.[3] This is in part due to its demand for flow batteries.

In the long-term the markets will adjust. As pointed out above, vanadium is not a rare metal, and current sources will be supplemented by somewhat more expensive sources, production will increase, and the prices will stabilize with reasonably predictable demand.

Organic compounds provide promising chemistries for flow batteries as there is great flexibility in how they can be designed, but they have a number of issues. The most serious of these is that they degrade over time. However, there has been rapid progress on this front lately, and a group from Harvard University have created a molecule that loses only 3% of its charge-carrying capacity per year. This probably still is not sufficiently stable for a commercial product, but it demonstrates rapid improvement from prior chemistries.

New organic chemistries based on iron are even more promising. Tianbiao Liu, from Utah State University in Logan, has designed a flow battery that uses a neutral pH electrolyte. This team started with an iron-containing electrolyte (ferrocyanide) that has been tried in earlier designs. In previous ferrocyanide batteries, the electrolyte was dissolved in water along with sodium or potassium salts. The salts provide positively charged ions that move through the cell to balance the electron movement during charging and discharging. Ferrocyanide isn't very soluble in those salt-solutions, limiting the electrical storage capacity of the battery.

So Liu and his colleagues replaced the salts with a nitrogen-based compound called ammonium that allows at least twice as much ferrocyanide to dissolve, doubling the battery's capacity. The resulting battery is not as energy-dense as a vanadium flow battery, but it otherwise has strong capabilities. In a mid-October issue of Joule, Liu and his colleagues reported that this battery shows no signs of degradation after 1000 charge-discharge cycles, equivalent to about 3 years of operation. And because the electrolytes have a neutral pH and are water-based, a leak is unlikely to produce environmental problems. See the image below for additional design details. 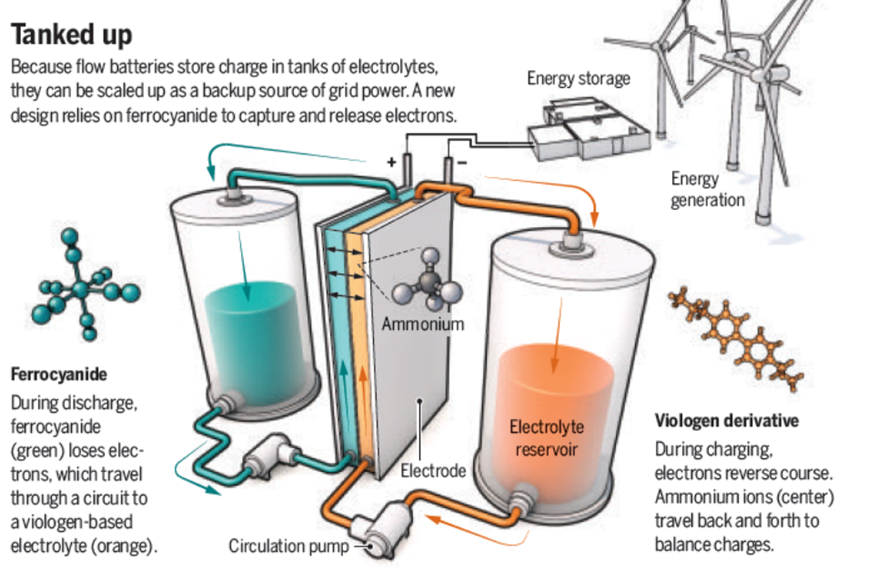 There are still many design issues to be worked out with the above design, and there are other promising designs. For instance another design created by research team led by Leroy Cronin, a chemist at the University of Glasgow, uses electrolytes made from metal-containing organic compounds called polyoxometalates. This technology stores far more energy in the same volume than other designs. In the 10 October issue of Nature Chemistry reported a polyoxometalate flow battery that stores up to 40 times as much charge as vanadium cells of the same volume. The downside for now is that these electrolytes are highly viscous and thus more challenging to pump through the battery.