Dr. Mukherjee is an experienced electrical power engineer and academic teaching professor. He brings over 25 years of experience working with electric utilities, universities and established...

At last month’s American Wind Energy Association’s WINDPOWER Conference, Mott MacDonald has the privilege of presenting a poster on our work in adaptive capacitor switching in wind energy generation. As a follow up, we also wanted to share our findings and insights with the Energy Central community.

Why are capacitors needed in wind farms?

Wind farms are typically required to be able to operate within a power factor of +/- 0.95. In order to achieve this range of operation, switched capacitor banks are used to supply bulk reactive power to the system when the generators approach their reactive power limits.

This example wind farm could come with 5 miles of 795 kcmil ACSR transmission line that connects the collection station to the point of interconnection (POIC). As a result, the reactive power compensation is located at the collection station and includes, for example, two 14 MVAR switched capacitor banks, which are connected to the 34.5 kV bus. The generators are then operating in a voltage control mode.

What can adaptive capacitor switching do for this example wind farm?

To develop an algorithm that adapts to changes in the operating state of the wind farm, a few simple equations will need to be developed to predict the behavior of several key components of the system: 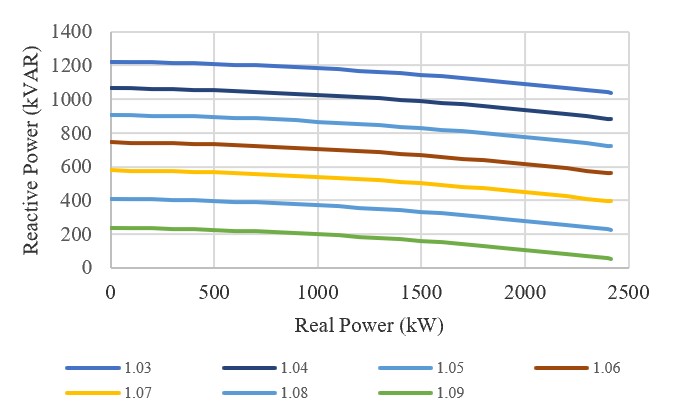 Then you plot the reactive power capability of the generators at 0 kW output in comparison to the voltage at the generator to get the following: 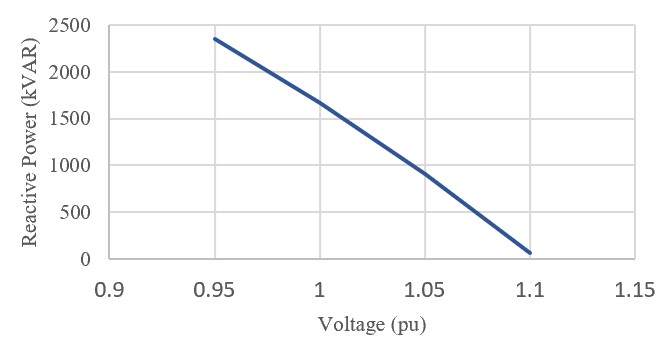 These analyses allow us to determine what the reactive power capability limit of the generator is at any normal operating point. 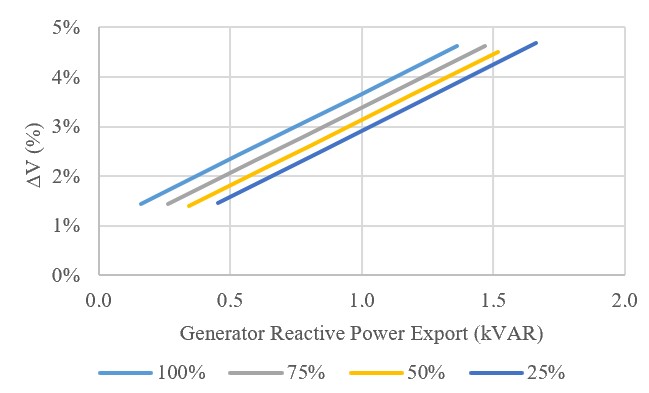 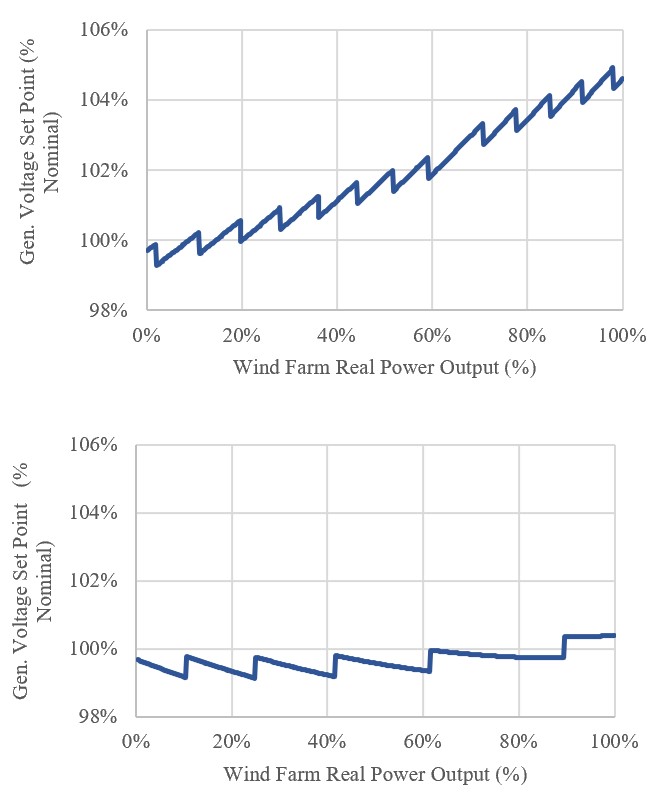 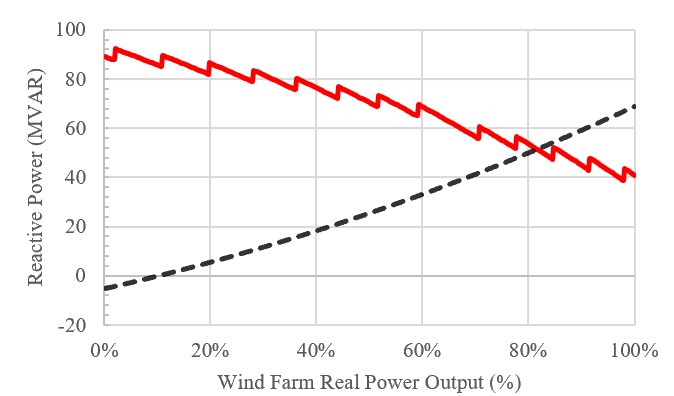 The reactive power capability equation can be updated to include the number of generators online by repeating the load flow tests used to develop the voltage sensitivity function with various numbers of generators disconnected and recording how the function constants change: 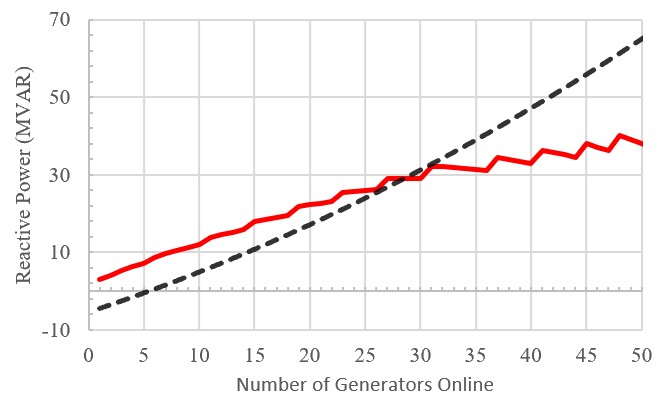 By fitting a linear function to the 70% capability limit line and performing a sensitivity analysis based on the number of online generators, the following equations adapt to operating conditions of the system: 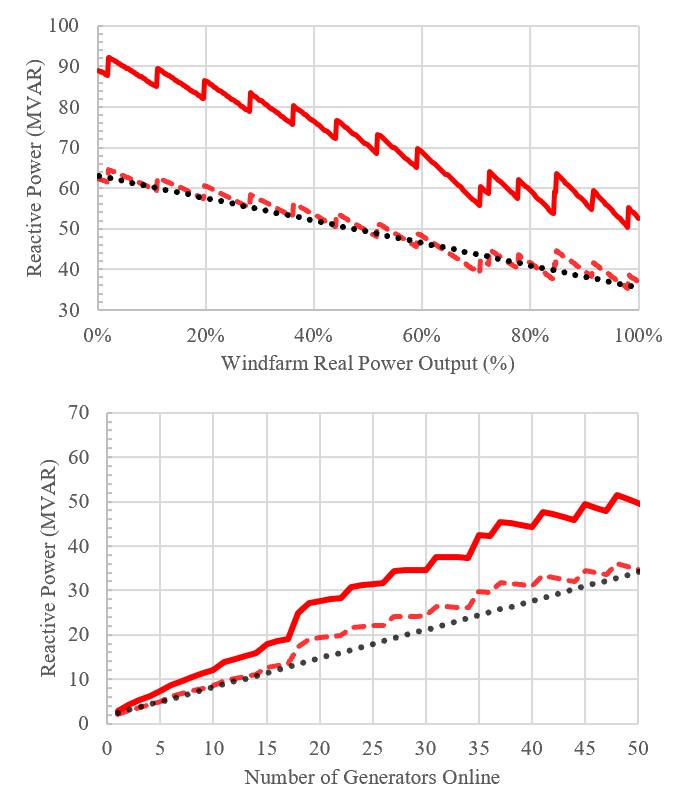 The dashed blue line below shows how the reactive power demand from the generators will decrease when the capacitors turn on during a ramp up in real power event, and capacitors are closing:

The dashed green line shows how the reactive power demand from the generators will decrease when the capacitors turn on during a ramp down in real power event, and capacitors are opening:

The purpose of this capacitor switching study was to develop an algorithm that adapts to the changes in a wind farm to ensure the generators can always meet their reactive power requirements.

The adaptive switching algorithm developed in this study optimizes the use of the switched capacitors for all operating conditions and prevents repetitive switching as the generators react to the capacitors reactive power generation.

Exploring the Potential Impacts on Birds and Bats from Taller Turbines

WHAT’S BLOWING IN US WIND POWER

BloombergNEF Analysts' Outlook on the US Offshore Wind Market

Call for Articles: What's Blowing in US Wind Power