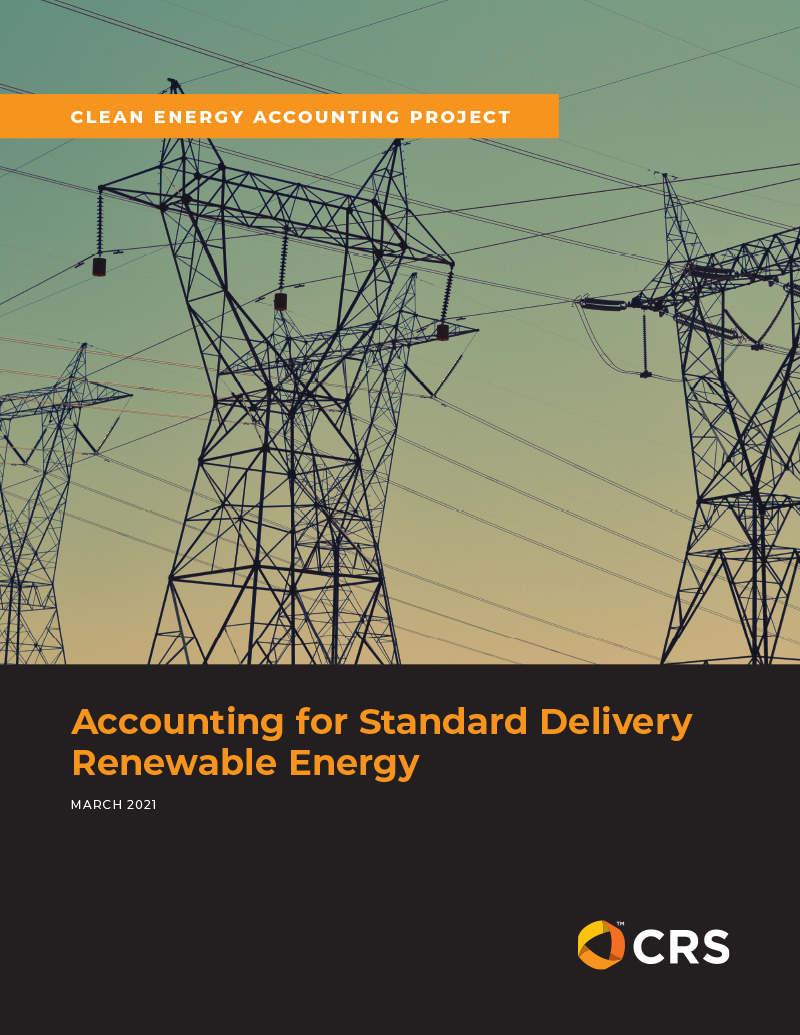 Michelle McGinty is the Program Outreach Manager, working to get the word out about the benefits of Green-e® certification and other program initiatives at CRS. She initially developed an...

Inconsistent approaches to accounting for Standard Delivery Renewable Energy—renewable energy that is not actively procured—have led to confusion for companies actively managing electricity and greenhouse gas emissions targets. In 2020, CRS facilitated a series of virtual workshops through its Clean Energy Accounting Project (CEAP) to identify areas of consensus and quantification best practices. This report is an outcome of that discussion and is intended to advance credible and consistent renewable energy accounting and claims.

The report details the strong consensus that consumers can claim to be using Standard Delivery Renewable Energy when renewable energy attributes and other requirements for credible renewable electricity usage claims are substantiated using credible data. It proposes a framework of credibility criteria and quality considerations that may be used to evaluate data sources available to customers, and explains how to integrate this information into renewable energy reporting. The report also provides guidance on how to report active procurement and Standard Delivery Renewable Energy together when calculating renewable energy use. Recommendations are offered for the next steps necessary to fully and accurately account for renewable energy use.

Thanks for sharing, Michelle-- can you expand on what existing entities or organizations might already be using this framework of credibility criteria, whether directly through this process or in frameworks they've created internally that reflect these principles?

Matt, thanks for asking. The proposed criteria are based on and consistent with existing guidance provided by RE100 and the Greenhouse Gas Protocol’s approach to accounting for indirect emissions from purchased electricity. As a result, companies conforming with those programs may be using this framework already by default. However, we welcome feedback on the proposal and engagement on the next steps proposed in the document, which include describing how to demonstrate conformance with the proposed criteria and prioritizing data quality considerations when multiple data sources are available. You can learn more/engage with the Clean Energy Accounting Project here.

Thanks for the additional information, Michelle!

Michelle, from any scientific or accounting perspective: that the "clean energy attributes" of generation can be captured in the form of a paper certificate (a "REC"), which can then be sold to a coal plant and used to clean an equivalent amount of dirty energy, is patently fraudulent.

Two entites are being allowed to take credit for generating the same clean energy; neither is taking responsibility for the emissions generated by the coal plant. Why this astoundingly obvious deception is not only tolerated but promoted by renewables developers is obvious: it assigns each megawatthour of energy from their solar farms twice its environmental value. Known as "double-counting", it's used as a basis for subsidies, meeting renewable energy targets, and any number of other illegitimate purposes, and was first documented by the Federal Trade Commission in 2007. When clean energy advocates protested the practice, promoters quickly came up with the artifice of "retiring" RECs and keeping elaborate records thereof, but only after they had already been counted twice.

Years ago a problem arose in California: how would energy generated by the coal plant then "cleaned" be categorized? If compared to financial receipts, there would be too much free energy - the numbers wouldn't add up. So the California Energy Commission invented a special category called "null" energy which wasn't added to the total. It was never generated, it was just there on the books. Its emissions had vanished into thin air.

I kid you not.

Solar energy is unavailable at night. To get around this fundamental deficiency, RECs were invented as a way to make clean energy generated during the day count as clean energy generated at night. Now that its been recognized as a fraud, solar/wind developers, either from ignorance or sheer mendacity, have proposed the idea huge batteries can be used to store energy used during the day, then recycle it at night. They've even constructed huge battery installations next to solar farms - none of which are actually charged by solar energy from the farm, but from a grid connection.

Like many other clean energy advocates you seem to be genuinely concerned about climate change, and perhaps you were unaware. But renewable energy attributes can't be "substantiated using credible data" when the concept itself is a scam.

How to close a super electric power contract?
News round-up, Monday, February 6, 2023
We asked for wishes, you answered: Send leaders into space, free electricity, dignity
How to reduce carbon emissions from trucking and logistics ?