From the newsletter of Dr. James Hansen, adjunct professor directing the Program on Climate Science, Awareness and Solutions of the Earth Institute at Columbia University, and colleague Makiko Sato.

As the best scientists do, Hansen and Sato here acknowledge the effects natural phenomena which have nothing to do with the primary focus of their work, but might be falsely attributed to it. For the next ~2 years, global temperatures will be raised not only GHG forcing (heating), but by a natural uptick in solar irradiance which fluctuates over a 10-13 year cycle.

"The immediate suspect is human-made greenhouse gases and amplifying climate feedbacks, but that explanation does not work.  Yes, the growth rate of the greenhouse gas (GHG) climate forcing has experienced a disturbing uptick in the past several years (Fig. 2), starkly inconsistent with global pledges to reduce emissions, creating an enormous burden for today’s young people.[1]  However, there is another variable forcing that is being measured accurately: solar irradiance.

There is no significant trend in solar irradiance during the past half-century, but there is a solar cycle (10-13 year) with a full amplitude of about 0.25 W/m2 with annual changes within a range of about ±0.03 W/m2.  This cyclical solar variability is unimportant for long-term climate change, but it is important for interpretation of the global warming acceleration that has occurred over the past five years.

In the past five years global temperature has jumped well above the trend which has been stable at about 0.18°C per decade for the past half century. This deviation is too large to be explained by unforced climate variability. 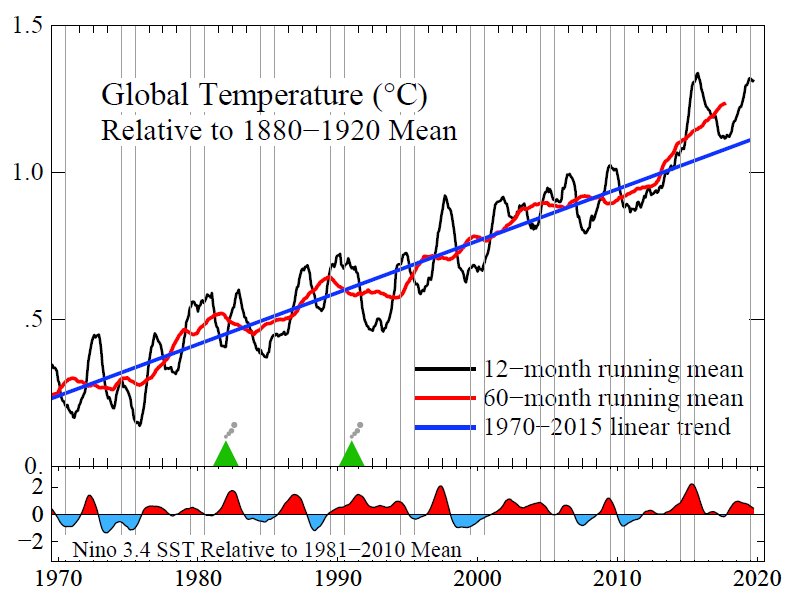 Jim commented on ...
The Provision of Energy without Fear -Decision Time
The paper was very interesting. But it just seemed to list reasons we won't have enough energy so we need Nuclear Energy.