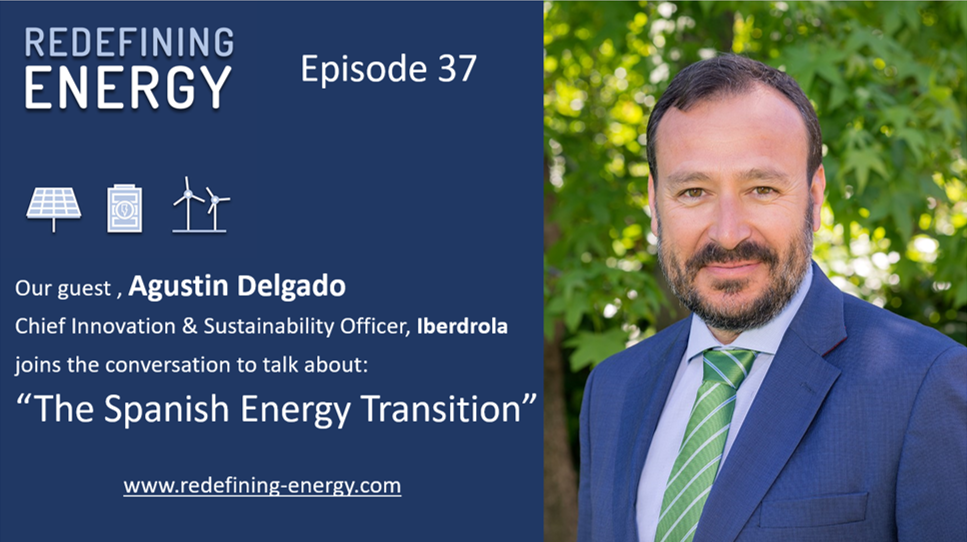 Episode 37: Spain is a country blessed with natural clean resources, water, wind and sun, but also prong to boom and busts when it comes to the Energy Transition.  Thankfully, Spain’s Energy Transition is also managed by no non-sense very competent professionals. It is our pleasure to welcome Agustin Delgado, CTO of Spanish giant Iberdrola, a company more valuable than RWE and E.ON combined. With Agustin, Gerard Reid and Laurent Segalen review Spain’s plan to massively decarbonise, and use mostly market forces and proven technologies to achieve this goal. Running a clean grid at 70% is within reach, thanks to a savvy combination of Solar, Wind and Pumped Hydro, while Battery Storage and CCGT will be used to balance the market. This will allow the retirement of coal and nuclear while electrifying transport and buildings. A great vision, but a pragmatic and totally doable. Spain is definitely back as a Clean Energy champion, and Iberdrola leads the charge.

Running a clean grid at 70% is within reach, thanks to a savvy combination of Solar, Wind and Pumped Hydro, while Battery Storage and CCGT will be used to balance the market. This will allow the retirement of coal and nuclear while electrifying transport and buildings. A great vision, but a pragmatic and totally doable.

Such an inspiring story to be able to tell-- I hope other countries are taking notes!

"Within reach"? France was using an 80%-clean grid powered by nuclear energy to heat buildings and power high-speed rail thirty years ago!

Taking the same savvy approach today would allow Spain to retire all of its solar, wind, pumped hydro, battery storage, etc., etc., and reclaim all of the excessive land they used. More importantly, it would free their country from dependence on foreign natural gas and other fossil fuels.

Why does Spain believe it can use pre-Enlightenment forms of energy to compete in a 21st-century world - especially one challenged by climate change?

Dear Bob, you are a nuclear expert.

I expect nothing of you but to defend your industry, even facing the hardest financial realities. Spain will reach 70% renewables with 100% private investments whereas EDF is currently begging the French Government for 56bnUSD to prolong the life of its ageing plants. With a market cap of 30bnUSD (Bloomberg) and an unfunded liability of 50-100bnUSD for decommissionning its old plants (Source: French Parliament special Commission 2019, confirmed by the "Cour des Comptes" - General Audit Office), EDF doesnt have the means to pursue the Nuclear adventure. Hence, the french taxpayer is on the hook.

For a lot of nuclear supporters, return on investment or even profitability are concepts which do not apply to their industry. Spain, as most countries around the world doesnt have the luxury to enjoy a total lack of capital discipline.

I graciously admit that, for the few countries who dont have other choices (huge loads, dense population, lack of resources), nuclear makes sense (NE Asia, NE US, Central EU), but nuclear has to be a choice of last resort due to its extravagant costs rather than a choice by default, as trumpeted by the Nuclear Industry ad nauseam.

Thank you for commenting. Always a pleasure

Laurent, I always find it amusing when I'm accused being on the take of some "nuclear industry." Where is this imaginary industry? Do you really believe GE, Hitachi, and Mitsubishi earn significant revenue selling nuclear reactors? They're too busy marketing big screen TVs, gas turbines, and cars to bother with something that doesn't fall apart for 80 years.

But do let me know if you uncover job opportunities, even if they're not lucrative. I can think of no profession more worthwhile than promoting a technology that offers such lasting value, to both the public and the environment.

A refrain I've heard for the last fifty years. There is exactly one country in the world that derives >40% of its electricity from solar and wind -  Denmark - and it's the most expensive electricity in the world. Time to make clean electricity available for the rest of us.

"EDF is currently begging the French Government for 56bnUSD to prolong the life of its ageing plants."

Electricité de France, a private-public consortium, is the French Government.

"For a lot of nuclear supporters, return on investment or even profitability are concepts which do not apply to their industry."

Personally, I wouldn't take pride in the fact my business was able to bilk captive ratepayers more effectively than others. Your statement might be rephrased as "For a lot of environmentalists, long-lasting, zero-carbon nuclear plants offer the best value to electricity consumers for providing reliable electricity and fighting climate change."

"...nuclear has to be a choice of last resort"

Your opinion has been duly noted. Ecomodernists, however, who freely accept that relying on the wind and sun for energy made sense 300 years ago, believe nuclear is the first choice for providing reliable, clean energy in the 21st century.

To avoid wreaking havoc on electricity grids serving the public, I've suggested wind and solar enthusiasts build 100% renewable grids to pursue their dream. But they haven't been receptive to the idea. Why do you think that might be?

In episode one of Energy Enablers, Siemens Smart Infrastructure's Matthias Rebellius discusses the role digital products can play in advancing the energy transition.

IaaS and PaaS Drive Cloud Deployments
Port of Long Beach pitches 'largest offshore wind facility in US' for California 25GW goal
Maybe simplification is the key to digitization?
What do we need to make Hydrogen a reality? | APPG, All Party Parliamentary Group on Hydrogen