A recent study has shown that Japan has 14 times more solar and offshore wind resources than needed to supply 100% renewable electricity. It also has vast capacity for off-river pumped hydro energy storage to balance variable solar and wind.

Low-cost solar photovoltaics and wind offer a reliable and affordable pathway to deep decarbonization of energy, which accounts for three quarters of global emissions. However, large-scale deployment of solar photovoltaics and wind requires space, and may be challenging for some countries with dense population and high per capita energy consumption.

A recent study investigated the future role of renewable energy in Japan as an example. The study comprised an hourly energy balance model of a hypothetical 100% renewable Japanese electricity system using representative demand data and 40 years of historical solar and wind meteorological data.

Offshore wind is important in regions such as Japan, Korea, the Philippines, northern Europe (bordering the North Sea) and northeast USA. These regions have high population density but access to vast areas of windy seas. Co-location of solar with agriculture is also important. “Agrivoltaics” involves shading around 10-20% of crops and pasture with widely spaced solar panel rows. While some crops such as rice respond negatively, many others respond positively or are neutral to the shading. The solar electrical output amounts to a second cash crop for the farmer, similar to co-location of wind turbines in farmland. In Southeast Asia there is vast capacity for floating solar on calm tropical seas.

Solar and wind are being installed at scales above 200 GW per annum and doubling every 3-4 years. Prices continue to fall and are converging upon global norms, as is usually the case with very large industries.

In our study of Japan, we found that the levelized cost of electricity from a solar/wind dominated system is in the range US$86-110/MWh. These costs can be compared with 2020 average wholesale prices on the spot market in Japan of US$102/MWh. Cost of balancing 100% renewable electricity in Japan (included in the preceding figures) ranges between US$20–27/MWh.

In summary, Japan can be self-sufficient for electricity supply at competitive costs.

Andy, Thanks Japan is showing the way for all the other countries. I hope all the other leaders want to show they are as smart and follow their lead. A few are trying but just don't put enough importance on being over 100% renewable. I have done it on my home . I made ever company I worked for much more efficient but they just don't get much done on their own. What will make them wale up and get moving on their own ?

We can certainly expect the fossil fuel importing countries to lead the way on decarbonizing their electricity (rather than coal giants like Australia and Germany).  However, Japan is far behind their non-fossil producing peer, such as France, Sweden, and Switzerland.  The common theme is that countries that embrace nuclear energy have easily decarbonized their grids, whereas countries that reject nuclear remain addicted to fossil fuel, all the while making promises of grand renewable visions.

However, Japan is far behind their non-fossil producing peer, such as France, Sweden, and Switzerland.  The common theme is that countries that embrace nuclear energy have easily decarbonized their grids,

Let's not forget another country which has embraced nuclear - Brazil.  Plus, unlike France, Sweden and Switzerland nuclear has not declined in Brazil in recent years. 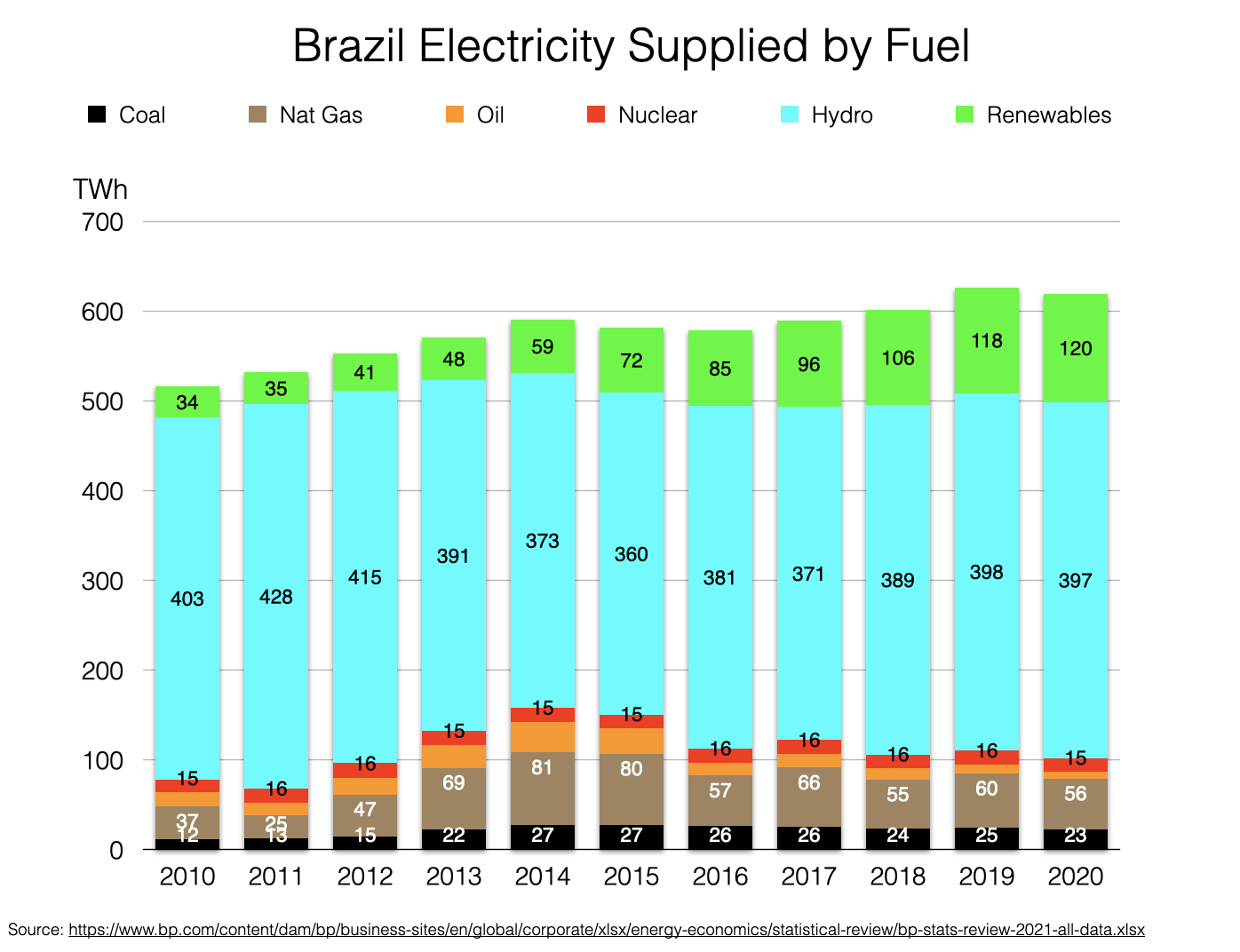 Facts on the ground: according to the World Nuclear Association, global nuclear generation declined over the past decade.