Energy storage is sometimes talked about as a holy grail solution to renewable energy intermittency. The simple reasons are that the sun doesn’t shine at night, and sometimes the wind doesn’t blow. Fair enough, and true.

Others assert that battery storage, seemingly the fastest-growing, practical, and dispatchable technology is just too expensive, inefficient, and can’t be scaled to the extent needed to fully back up renewables. This latter group also seems to be enormously and perhaps inordinately fond of nuclear energy, decrying that we’ve only built one new unit in years, notwithstanding the enormous cost overruns, years of delays and reputed corruption involved in the faltering, four-unit Vogtle plant in Georgia, which is years behind schedule with a tab now said to be up to at least $20 billion. They also assert that the lack of safe, sufficient, and “permanent” nuclear waste storage isn’t actually a problem. Yet the newest reactor to go into commercial operation in this country is Tennessee Valley Authority’s Watts Bar Unit 2, which began operation in June 2016 and before that, one built 24 years ago.

To be sure, cost could be a critical factor. For example, NRG Energy wrote off $481 million in 2011 after permanently halting its South Texas Project with TEPCO and Toshiba. Nuclear plants can cost upwards of $5,500-$8,100 per kW, roughly eight times what a combustion turbine costs and nine to ten times the cost of a combined cycle gas turbine plant—and that’s when completed on time and on budget, which evidently never happens.

Then, there are concerns about security and the ability to evacuate population centers in case of an attack, certainly a partial holdover from 9/11, but also out of concerns about an accident (think Chernobyl, Three Mile Island, and Fukushima). These push back against new nuclear plants, and for many of the same reasons have resulted in closing existing plants, such as New York’s Indian Point plant on the Hudson, where one reactor was closed in April of this year, and the other is to be closed next April.  Yet elsewhere, things are different. According to Power Technology, between 2020 and 2026, 48 nuclear reactors will be built around the world with China in the lead, followed by India and South Korea.

So, I’d like to focus on two storage technologies, one getting very little press, and the other in a conceptual yet workable stage, which presents enormous and fascinating potential. In the meantime, we typically hear about batteries, pumped hydro, and compressed air.  Batteries, of course, are of obvious and intense interest because they make electric vehicles (EV) possible, and because of the market interest and popularity/notoriety of EV leader Tesla and its quirky and iconoclastic founder, Elon Musk. Among his many companies, today what’s getting more attention is his private, civilian space exploration and vehicle launch company, SpaceX.

Battery technology itself, beyond those for EVs, continues to make major advances. Battery storage companies in Q1 2020 raised $164 million in venture capital money, and lithium-ion batteries still lead the way, with lead-acid and flow batteries battling it out. But “some” say that life limitations, safety concerns, cost, regulatory and recycling concerns will limit the growth of even the most promising li-ion batteries. However, the EIA is much more bullish, predicting significant percentage increases over the next few years that could cumulatively reach more than 4,500 MW in just five years. But when the installed base is today still relatively tiny, even major percentage increases may not amount to world-class numbers.

So, I’d like to look at two other technologies, being discussed but often lost in the frenzied, overhyped suggestion that batteries are the only way forward for backing renewables, for emergency/backup power for home solar installations, and for commercial and industrial factory rooftop and parking canopy solar as well as community solar fields.

The first is molten salt, which in its great simplicity is simple thermal storage. In general, it requires salt as a medium to absorb and retain heat, which can then be used to boil water to create steam and drive electric turbines. But it has the added benefit of being available for use directly for heating applications such as district energy systems, which can provide hot water, steam, and can also be converted to cold water using steam through absorption chillers. Molten salts are typically made up of 60% sodium nitrate and 40% potassium nitrate.

Molten salt systems, for the most part, are connected directly to steam turbine generators that either complement or replace fossil fuel-driven boilers. Since molten salt temperatures can exceed 600C (1,100F), they can be applied to boilers rated all the way up to supercritical. The typical two-tank molten salt system uses molten salt as the heat storage medium but also as a heat transfer medium, and includes both a hot and “cold” storage tank.

A thermocline system on the other hand, uses a single tank that separates hot and cold salt via a vertical temperature gradient, using the buoyancy differential force that prevents mixing. In this system, salt flows out of the cold side, is heated by the heat exchanger and flows into the tank’s hot side. To discharge, salt flows out of the hot side, transfers heat to the turbine, and then flows back into the tank's cold side. Using a single tank reduces costs and complexity.

Molten salt is currently the most common method to store heat in large concentrating-solar plants (CSP) with capital costs only a fraction of battery systems. And just this month (June 2020), a molten salt receiver was installed in the world’s tallest Solar Power Tower in Dubai.

The other energy storage technology I’d like to mention is very different in significant ways, and is built on the production and use of hydrogen, ironically from nuclear generation. It is not in wide use, but it’s certainly more than conceptual in nature and represents a vast departure from virtually every energy storage system in use.

Hydrogen (H2) can be produced by a number of methods, including the generation of power from nuclear fission reactors that are in wide use worldwide, and according to the World Nuclear Association and US EIA, represent about 20% of the existing supply of electricity in the United States and 10% worldwide. While hydrogen is by nature highly explosive, and must be created, handled, and stored with care, its great benefit is that it can be combusted without producing any CO2. Here, the concept is simple: hydrogen is produced on one end via an electrolyzer, and electricity produced on the other, with the H2 pipeline itself as the actual storage mechanism in between.

This method could effectively, over time, replace the vast majority of the existing bulk power grid, currently transmitted by expensive, intrusive, and high-maintenance conductors with an average age of 40+ years. Currently, best estimates from the Edison Electric Institute are that there are more than 600,000 cumulative miles of transmission lines, more than a quarter-million of which are high-voltage (>240 kV).

In addition, Exelon, with support from DOE’s Office of Energy Efficiency and Renewable Energy, INL, Argonne National Laboratory, and the NREL are supporting a project to install a hydrogen electrolyzer at one of Exelon Nuclear’s boiling water reactors to “demonstrate ‘dynamic production’ of hydrogen from nuclear power.” This generated hydrogen can be put into the existing pipeline system and sent directly to existing fossil generating plants where it can used as a feedstock for combustion turbines and combined-cycle generators. All major gas turbine manufacturers offer, or are developing gas turbines that are capable of burning high volumes of hydrogen mixed in with natural gas. Hydrogen can also be used as feedstock for hydrogen-powered vehicles, district energy/heating, and in a number of commercial and industrial applications, as depicted here by the US DoE (Source H2@Scale): 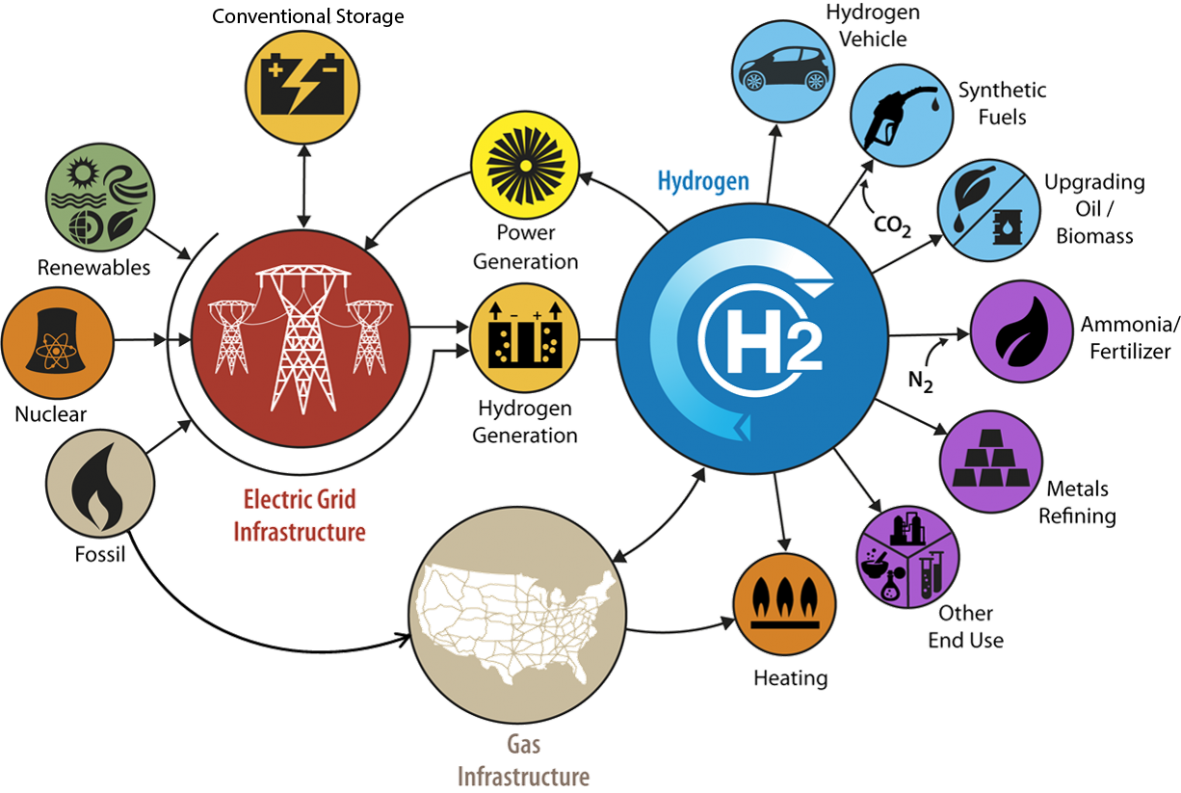 There is one complication: while combusting hydrogen produces no carbon dioxide, it does produce nitrogen oxides that will require pre- or post-combustion controls.

Naysayers aside, energy storage will continue to move forward to advance, if not a “Green New Deal,” certainly a “Greener” one. And molten salt and hydrogen can play an important if not central role in getting us there.  #   #   #