Energy and Utilities industry is rapidly evolving due to changes in underlying technologies. The industry has not just adopted the new and emerging technologies but it has also created new ecosystems / business models. The customers are constantly evolving with industry - intially by consuming technology presented by the industry, then contributing into the evolution cycle and of late they are the ones driving change. We will provide a perspective on changing dynamics of the Customer of Energy & utilities industry.

In the last few decades, there were technological advancements mostly in the FTM (Front of the Meter) areas like Generation technology updates, Transmission technology updates, Grid Modernization etc. However, in the last decade due to technology advancements in renewable energy resources and storage solutions, the BTM (Behind the Meter) related solutions are evolving rapidly. This has led to increased number of interconnected devices and improved customer engagement in the industry. Traditional energy Customer (Consumer) is changing the industry landscape by participating in producing electricity using renewable sources (like Wind & Solar). This change is causing cascading effects on the grid.

The end customer is shifting its position from far right towards center of the energy cycle (Generation thru consumption). With the substantial improvements in the availability and cost effectiveness of BTM storage, solar / wind generation; consumer of utilities is turning into producer. This changed persona is fondly referred to as ‘prosumer’ (term first used in 1985 for Producing Consumer) and further progression of the prosumer to ‘prosumager’ for one who not only produces but also have storage.

In next section we will have more closure look at each of these personas within the industry and more importantly we will discuss their characteristics.

We will be discussing the following customer personas in this document:

Like all industry facets, all evolutions taken place around the central theme of consumer.  When one of the greatest inventors Thomas Edison invented electric grid, he had consumer in mind. While technology has changed multifold since the invention, still the most influential persona is consumer as all the key inventions are done with an end goal of improving experience of consumer.

Consumer refers to those who continue to buy all electricity from the distribution network and pay more or less the regulated bundled rates at any given time. These consumers, while not entirely thrilled with their current supplier (in many cases), may nevertheless be sufficiently motivated and/or have attractive options to move away from the status quo.

There is substantial difference between consumer from last few decades to that of today. The primary difference is in the level of awareness and engagement with the industry. Today’s consumer is not just looking for stability and secure delivery of power however he/she wants to be engaged with the provider for key events and in many cases likes to be provided with options for the type of energy that is supplied to him/her. This engagement and awareness is one of the most important driving factors for a consumer to start looking for renewable energy options in the beginning and later this can lead to self-sufficiency.

Combined these forces, the industry is undergoing tremendous changes and it is evolving around these factors. To fulfill ever increasing demand for renewable energy sources, regulators are promoting a more interactive and decentralized model in which consumers may also play a role as prosumers, however this transition from Consumer to Prosumer is slow and a gradual process.

The word “prosumer” is derived from two words “producer” and “consumer” and refers to those who invest in self-generation, thereby reducing or virtually eliminating their net electricity purchase from the provider. In today's supply chain network, the producer or supplier is generally at one end of the network, and the consumer or demand side is at the other end. Often there is limited communication between the two entities, though in the last few decades the necessity of this linkage has been recognized and fields such as “demand-side management (DSM)” have been born. Though DSM enables the creation of bidirectional “information flow” between the two entities, the physical flow between them is still one directional, i.e., the demand side is a consumer, and the supply side is a producer. Most prosumers, however, will remain connected to the distribution network and dependent on the grid for balancing their variable generation and load.

As described in Consumer Section, due to climate challenges and favorable policy framework by policy makers, traditional consumer who was dependent on the grid for all energy requirements; now started to produce / or looking to produce energy for its consumption through renewable sources (Solar Panel or Wind). Similarly, Electric Vehicle owners are leaning towards installing solar panels. Additionally, some local government policies are mandating new homeowners to be equipped with renewable energy sources. Production of the renewable energy is dependent on multiple factors like local climate, location, cost etc. therefore prosumer will still be partially dependent on the grid for reliability and stability. To manage this partial dependence of prosumer on grid, there requires a different kind of ongoing communication which was not required with traditional consumer. Additionally, prosumer and utilities require different type of calculations for financial settlement. 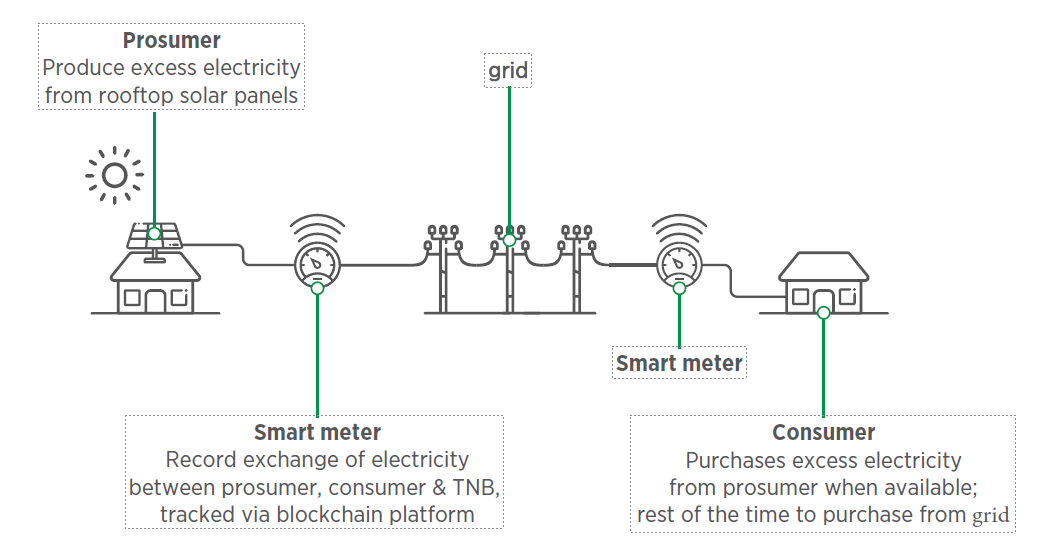 The term “Prosumager” was coined by Richard Green, at the workshop “Future of Utilities – Utilities of the Future”, convened by Fereidoon Sioshansi at the 39th International Conference of the IAEE (International Association of Energy Economics). In his presentation “ProsumAGE in the electricity market”, Green defined it in the following way:

Prosumager refers to those who may go a step beyond prosumer by investing in distributed storage, making them even less dependent on the distribution network because they can store some of the excess generation for use at later times.

Prosumager++ refers to customers who may trade or share their energy generation and consumption imbalance with others. Such peer-to-peer (P2P) schemes may become feasible through intermediaries and/ or aggregators offering platforms where trading and sharing can take place. These more exotic options are currently in their infancy but are beginning to be introduced on pilot scale. It is just a matter of time before they will eventually become widespread.

In last decade, there were many changes in the energy storage system (ESS), driven by factors like climate challenge, availability and affordability of large-scale batteries and increase in deployment of renewable energy sources. Due to these factors, there were substantial increase in installation of ESS in households. Energy Consumer from the last decade who started generating energy for self-consumption now have an option of installing ESS to not only to become self-sufficient but going a step forward and start trading the energy. There are many initiatives across the globe around Peer-to-Peer energy trading, though these initiatives are still at a very small scale but they are gaining popularity.

Smart Charging or Bi-Directional Charging in Electric Vehicle will have positive impact on transition of Prosumer into Prosumager or Prosumager ++. Few utilities along technology companies are also actively working on VPP (Virtual Power Plant) which will allow easy integration of ESS / EV into power grid. 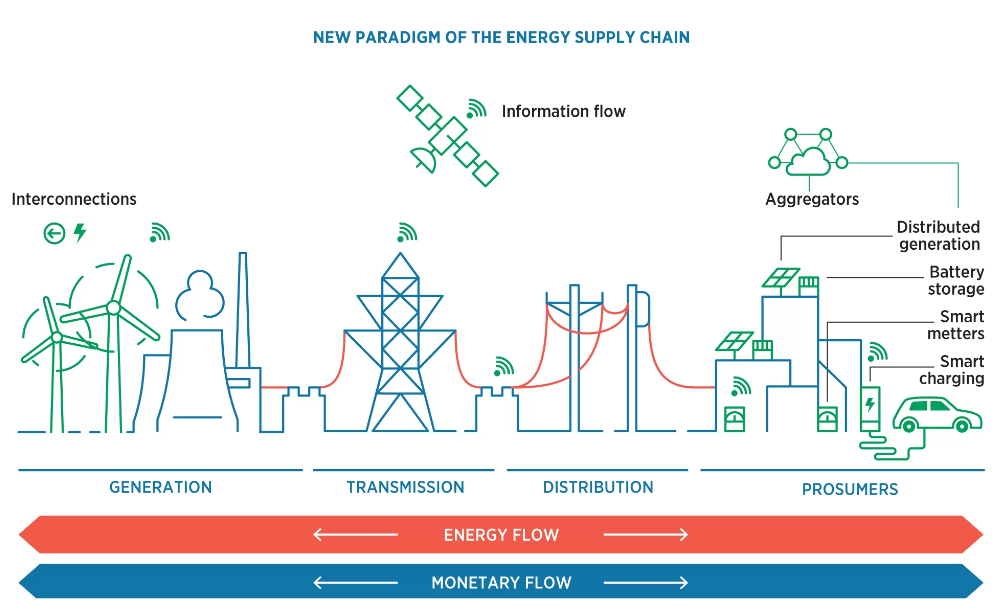 Following are few emerging trends in Prosumager/Prosumager ++ Territory within the industry:

P2P Energy Trading: Peer-to-peer (P2P) electricity trading is a business model, based on an interconnected platform, that serves as an online marketplace where consumers and producers “meet” to trade electricity directly, without the need for an intermediary. P2P electricity trading platform allows local distributed energy generators to sell their electricity at the desired price to consumers willing to pay that price.

This electricity is usually transacted between users (buyers/sellers) of the platform that also become members of the platform, for example by paying a pre-determined monthly subscription fee. Just like an open market economy, suppliers seek the highest possible price, keeping their costs and profit in consideration, and consumers choose the lowest price possible based on their needs and preferences. Where the supply and demand offers – that is, the sell and buy bids – are matching, a trade occurs. 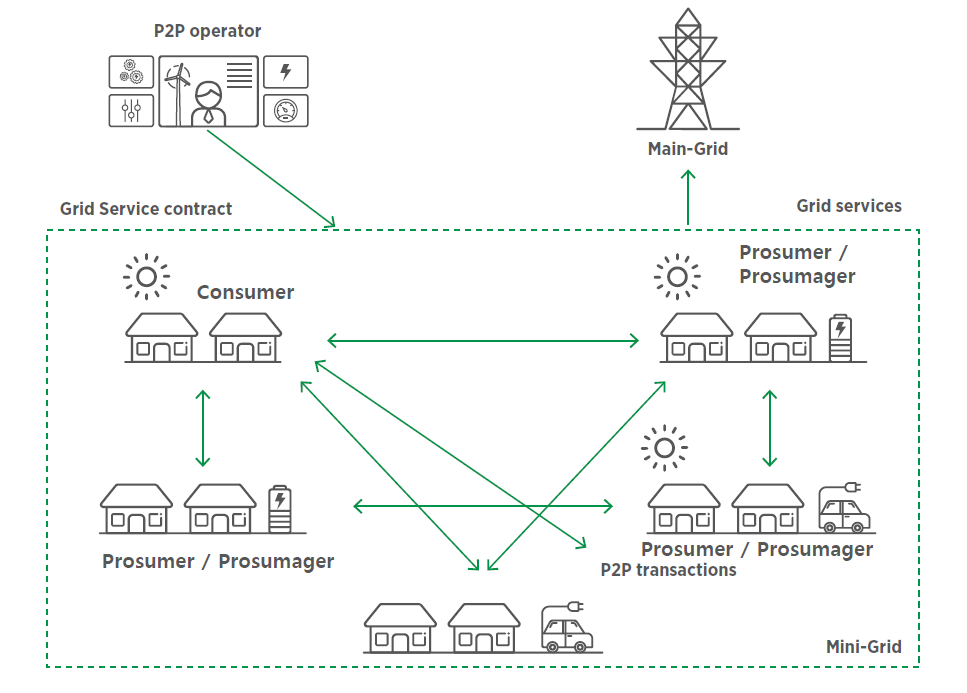 Environment Energy and Utilities industry is adopting to new realities powered by climate challenges. There were technology advancements in FTM (Front of The Meter) components and services like – Grid Modernization, Transmission Upgrade, Distribution System upgrades etc. Even there were/are technology upgrades at the Meter (like AMI), however in last few years the advancements are in the BTM (Behind the Meter) components. Most of the BTM upgrades driven by customer and it will be so for most part of the decade. Few advantages and dis-advantages of consumer to Prosumer/Prosumager transition are as below. 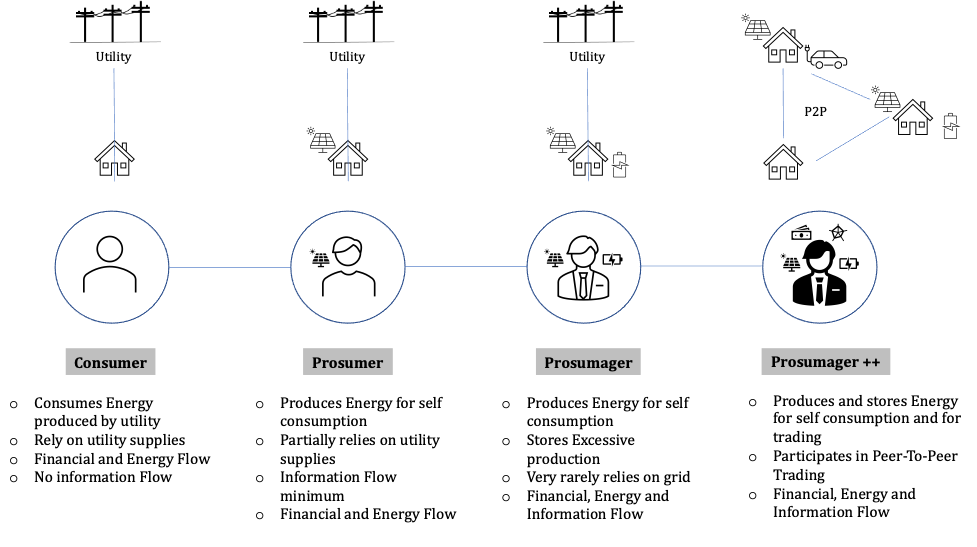 This article was co-authored with Sandeep Dayal.

In our research, we have used information and data from following sources:

Are there other industries out there going through such a 'customer type' shift as utilities? I'm wondering what lessons there might be to be learned from them!

However, in reality, most utilities' AMI are unable to cope with high amount of data processing and bandwidth requirement from the sensing nodes (Smart Meter) up to the backend system (Meter Data Management System). In P2P Energy Trading use case for example, the matching algorithm by leading platform providers runs every 30 minutes, and it will require additional 5 to 10 minutes of processing time to fully match between buyer and seller in the platform. The processing time is proportionate to the number of participants in the platform. Hence, to conduct such computation within utilities' AMI requires extensive augmentation which of course, involve higher cost.

That is why in most P2P Energy Trading projects, including the ones with P2P as part of Virtual Power Plant platform modules, measurement and verification are conducted using separate smart/digital meters, which communicate directly to P2P/VPP Platform. The measurements (half-hourly is the minimum requirement) from utilities' AMI are merely consolidated on laggard basis (manually or automatically) in the P2P/VPP platform for weekly/monthly settlement among participants, platform providers and utilities.

As a disclaimer, the above example merely considers automatic matching among P2P participants. Factors such as participants behavioural patterns, price signals, electrical network constraints, ability to provide flexibility service back to the network, etc. are not considered. These are the factors that may further divide customer personas as the benefits that could be achieve will be more than just having lower energy cost.