Consultant in education and training, previously worked in the oil exploration, renewable energy and electricity supply industries. Keen interest in demand side management with 15,000... 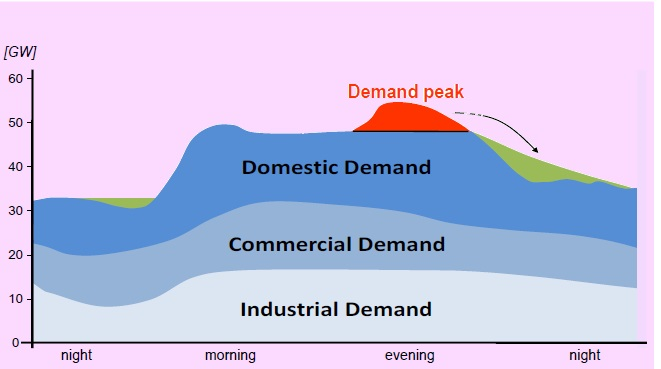 In UK there is little effective demand side response from the domestic sector. This is despite massive investment in smart meters, and a domestic sector that is the overwhelming cause of the peak electricity demand that occurs on winter evenings.

Currently the onus falls on industry to counterbalance domestic peak demand. The cement industry is a good example, where production has been largely shifted to off-peak times to take advantage of time-of-use tariffs, with the extra cost of paying workers for unsocial hours etc.

Getting domestic consumers to shift their consumption out of peak times has been put in the too difficult box, with OFGEM, the UK regulator, making no serious effort to motivate suppliers to do anything about it.

However, there is some good news.

About ten per cent of domestic consumers do already time-shift their consumption. These are in three broad and overlapping groups:

So, out of the twenty-five to thirty million domestic household consumers, between 2.5and 3 million are already doing something about the problem.

The conventional answer is smart meters followed by time-of-use tariffs will bring the change about.

Unfortunately it isn’t happening that way, for various reasons:

So, what is the solution?

This is an open question, so please comment on it.

Likely successful programmes may include:

These are great questions, Tom, and I'll be following this closely. One question I'm curious to see as conversation of the time shift demand question develops is how it changes regionally-- are certain countries, localities, or regions better set up to make a push? Are there cultural aspects that show a difference in effective strategies?

Thanks for starting the conversation, Tom!

Tom, I think consumers tend to view demand/response programs as an attempt to shift what was formerly the responsibility of a utility - providing an adequate supply of electricity  - to the public, as a cost in convenience.

Sure, utilities say "consumers can save money by doing their laundry or cooking in off-hours." But in every instance of which I'm aware utilities raise their price of electricity first, making it necessary for customers to use electricity in off-hours merely to stay within their monthly budget.

At least in the U.S., demand-response and time-of-use pricing are band-aids designed to fix a fundamental flaw of market design: the decoupling of electricity sales from profit. The original aim of decoupling was to prevent utilities from encouraging the public to use more electricity. It was noble one, intended to reduce carbon emissions and dependence on foreign oil. But in the end, decoupling only warped the incentives of utilities to profit by other means - ones which often increased carbon emissions and/or raised prices.

Flat-rate electricity, with a guaranteed percentage of profit for utilities, was a business model with benefits for utilities, for consumers, and for society.

I have two main points to add to your insightful article. Firstly members of the younger generation have more environmental awareness, for example the School Strikers - and they are too young to be managing a household yet. (or at least I hope so :-)), so your third category will increase.

Secondly, we are entering an age of AI and "intelligent" appliances (the IoT) where our appliances can be programmed to save energy, so for example you could load the washing machine, and it would run itself when it got a signal that prices had dropped.

More efficient devices are another area, although there is the danger of "Jevons Paradox" where more efficiency increases usage and therefore consumption.